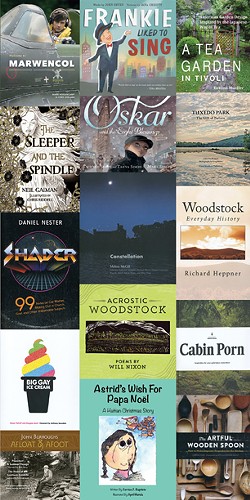 Will Nixon, illustrations by Carol Zaloom

An acrostic poem Nixon wrote for Walking Woodstock collaborator Michael Perkins sparked this delirious, deft celebration of all things Woodstock. You don't have to be local to love these poems, but it may widen your grin. (Yes, he names names.) From "Catskill Mountain Pizza": "Pity the poor / Zombies who taste nothing but brains. I've got an / Appetite for the world with everything on it." Appearances: 12/4 at 7pm, "PAW Reads Woodstock Poems by Will Nixon" at The Golden Notebook, Woodstock; 12/4-6, Woodstock Poems Scavenger Hunt with $100 gift certificate (details at Golden Notebook); 12/19 at 5pm, "The Woodstock Poems" reading at the Woodstock Library. —NS

THE ARTFUL WOODEN SPOON: HOW TO MAKE EXQUISITE KEEPSAKES FOR THE KITCHEN

In so many shapes and sizes, skinny and curvy, wooden spoons rock. No one makes them better than Josh Vogel, co-founder of Black Creek Mercantile. His book is a delicious how-to, taking you from crude woodblock to sublime spoon in 225 dreamy photographs and by turns rhapsodic and helpful text. Appearing 12/3 at 6pm, Oblong Books & Music, Rhinebeck; 12/5 at 4pm, The Golden Notebook, Woodstock. —JM

WKZE's Jerrice Baptiste digs into her Haitian roots for this whimsical, socially conscious tale of Astrid, who wishes only for Papa Noël to bring prosperity to her impoverished fishing village. She works hard in her fatherless house, and sure enough, an amusing Caribbean version of Santa Claus arrives. Illustrations by April Matula convey holiday spirit without a hint of snow. Appearing 12/9 at 4:15pm, Morton Memorial Library, Rhinecliff; 12/10 at 5pm, Lace Mill, Kingston; 12/12 at 1pm, Tivoli Free Library; 12/18 at 10:30am, Town of Esopus Library; 12/19 at noon, Ulster Library. —RBW

Metro-North commuters riding up the Hudson often wonder at the ruins of Bannerman's Castle. Since this June, the island has hosted a magical artwork by Beacon artist McGill: 17 solar-powered lights illuminate at dusk, tracing the outlines of walls past and present. In these midnight-blue pages, the artist's statements, photos, and drawings join writings by talented neighbors—four poets, a journalist, two Lenape Center historians—responding to Constellation or reflecting its themes; in Jeffrey Yang's words, "light and line, figure and void." A luminous collaboration. —NS

This month marks a century since the birth of Frank Sinatra. While his voice and style defined an era, Ol' Blue Eyes is still being discovered by new generations, who can learn all about him in this adorable book. Berkshires author-and-illustrator team John Seven and Jana Christy (Happy Punks 1-2-3, A Child's Guide to Anarchy) bring Sinatra's story to life, from skinny, bullied boy with a dream all the way to Vegas, baby. The book celebrates music, talent, and stick-to-itiveness. —JM