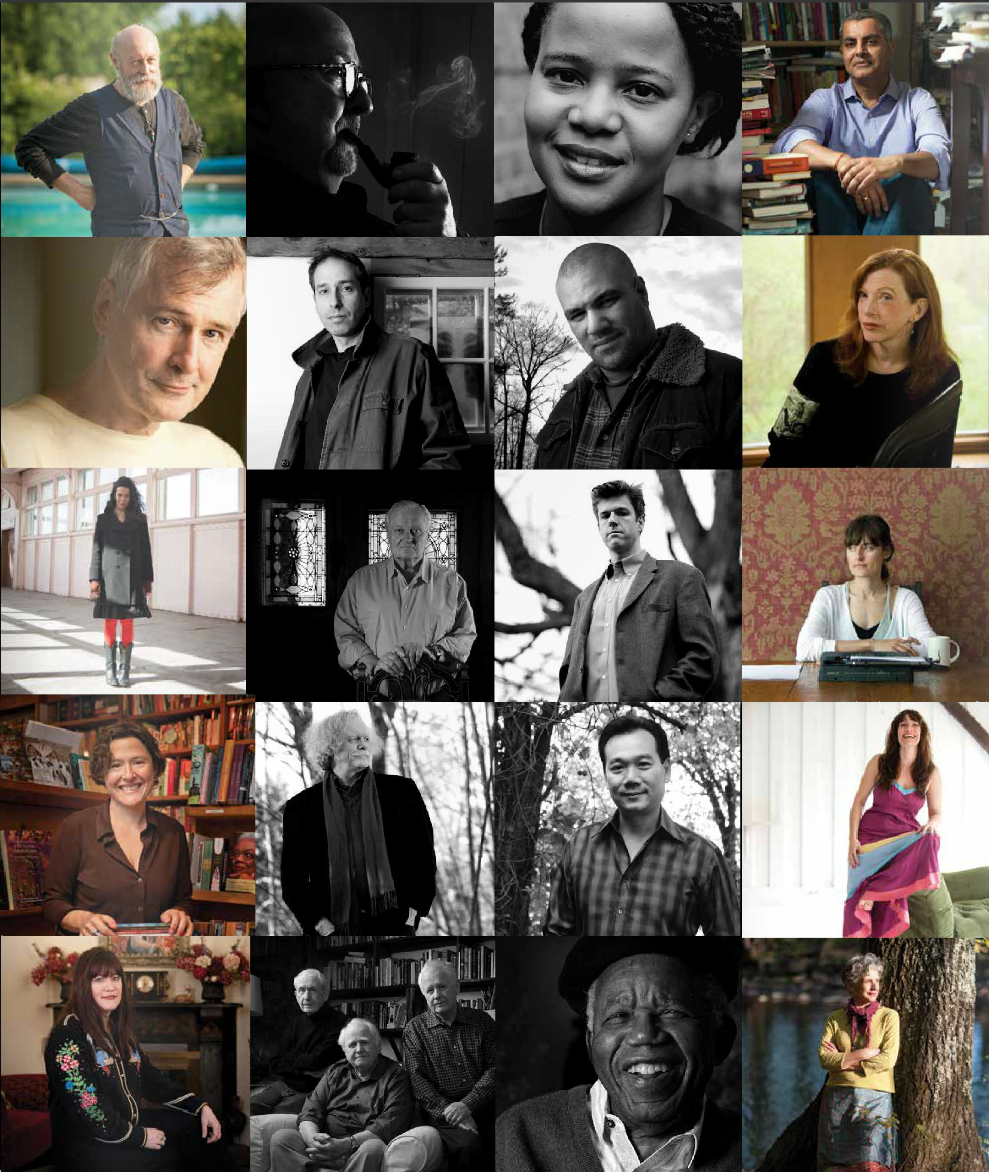 This is my 150th issue as Chronogram's books editor, and my last. Since 2004, I've had a vantage point with a spectacular view of the Hudson Valley's burgeoning literary scene. I'm insanely grateful, and—not to roll out my Oscar speech—I want to thank Chronogram editor Brian Mahoney for sending me up the cliff.

My first approach to Chronogram wasn't graceful. A playwright and recovering ex-TV writer who'd ditched New York for Ulster County, I often picked up the local arts and culture mag with the great covers. At a friend's urging, I submitted a piece for its 2003 Literary Supplement. A genial fellow named Brian called me to explain that my personal essay about swimming wasn't quite right for, um, a fiction contest, but he liked the writing. Would I be interested in doing a profile of New Yorker cartoonist Danny Shanahan?

Of course I said yes, and Danny—a wry, hilarious interviewee—made me look good. I got hired again, this time to profile novelist Scott Spencer. By now, Chronogram was receiving more books by local authors than its annual Book Review roundup could hold. Brian decided to launch a monthly books section and, over lunch at the Main Street Bistro in New Paltz, invited me on board as books editor. It would be the first steady job I'd held since leaving Manhattan, and I was ambivalent. I told him I'd think about it.

I drove home to a blinking message machine. After two years of knocking on doors, my agent had an offer on my first novel,Clearcut, from Random House imprint Anchor Books. Of course, I said yes again, to Random House and to Chronogram. What better way to learn about the book publishing industry?

Brian and I agreed to keep the focus solidly local. Our terrain was a loosely sketched "Mid-Hudson Valley" that stretched north to the Capital District, east to the edge of the Berkshires, south to the Tappan Zee Bridge, and west to the Catskills. The books we'd review and the authors I'd profile could be connected to this magic zone by the author's home, subject matter, and/or upcoming events in local bookstores. I figured I'd interview the writers who taught at Vassar, Bard, and SUNY New Paltz, and then we'd run out. I was so, so, so wrong.

There's an old and, as far as I know, unsubstantiated statistic that the Hudson Valley has more artists per capita than anyplace else in America. Thing is, I believe it. The literary community that was budding in 2004 is now in riotous full bloom, with more writers moving here every year. Thanks to Chronogram, and the book I collaborated on with my longtime colleague, photographer Jennifer May (River of Words: Portraits of Hudson Valley Writers, SUNY Press, 2010), I've interviewed more than 200 of them, with portraits by Jen, Roy Gumpel, Dion Ogust, and Franco Vogt, among others.

I joined a protest with Pete Seeger, met John Ashbery in stocking feet in his kitchen, interviewed John Sayles at Upstate Films and John Patrick Shanley between rehearsals at the Powerhouse Theatre, fed Susan Orlean's hens, hiked to the Saugerties lighthouse with Jon Bowermaster. There were lunches and endless cups of coffee at local cafés and in writers' homes. Carol Goodman served me high tea, Joydeep Roy-Bhattacharya rustled up chicken vindaloo, Abigail Thomas baked a cake, and Anne Gorrick sent me home with a jar of home-canned blackcap raspberry jam. I got so many books signed by interviewees that I added a new wall of bookshelves. (Among my treasures: a hand-painted flyleaf angel by Nancy Willard, the copy of Angela's Ashes waggishly autographed by Malachy McCourt when his brother Frank had to join our interview by phone, and the mystery signed by late grandmaster Donald E. Westlake, "For Nina. You ask too many questions.")

I do, and the answers I've gotten reveal many truths about writing. First and foremost: There's no right way to do it. Every writer carves out his or her set of work habits, which may change with every new project, or not. Some, like the überprolific Robert Kelly and T. C. Boyle, start every morning with words; others write in infrequent bursts or in caffeine-fueled marathon binges. Some blast out messy first drafts and revise them for years; Carey Harrison eschews rewriting at all, saying it "disimproves" the original impulse. Jo Ann Beard won't begin her next sentence until she's perfected the one in her head.

There are writers who read each day's work to their partners and writers who keep their own counsel. Some two-writer couples negotiate worktime/chore exchanges, as Stephen O'Connor and Helen Benedict did when their children were young. Cornelius Eady and Sarah Micklem share a kitchen table in their New York apartment, but have his-and-hers bungalows at their Greene County getaway.

Two backstories dominate: writers who grew up surrounded by books, and writers who found and clung to them like a life raft. I often focus on biography and process because the true stuff of writing is a mysterious alchemy, invisible even to those who cast spells. Our life experience is both bellows and fuel.

One question I always ask authors is how they came to live in the Hudson Valley. The literary diaspora shares some migration patterns with other artists, creatives, and freelancers freed from the urban grind by emerging technologies. I hear the same stories a lot: Came up for a weekend to visit friends, rented a summer place, stayed. Second kid didn't fit in the Brooklyn apartment. Uprooted by 9/11. Went to college here, moved away, then moved back. Grew up here, dammit, and never left.

It's easy to see why someone not yoked to a nine-to-five workweek would choose to write in a place of magnificent natural beauty that's only a few hours from publishing's company town. A writer can easily bop down the river by train for an editorial meeting and be home by the time the stars shine over Bannerman Castle.

But there's more in the mix than proximity and scenic views. The artistic community here is a powerful draw. Authors come from all over the country to participate in the region's many spectacular literary festivals and reading series, including the Woodstock Bookfest (née Woodstock Writers Festival) and its bookish cousins in Cold Spring, Hudson, Millbrook, Red Hook, Spencertown, and Warwick, or the Festival of Women Writers in the Catskills' own Book Village, Hobart. Some come to teach and set down local roots; the Bard Fiction Prize alone has rewritten a slew of address books.

If the Hudson Valley is a magnet for writers, it's also (and not incidentally) chock-full of readers. When independent bookstores around the country started to fold under pressure from big-box and online retailers, the region's resilient booksellers found ways to survive and even expand, offering author readings and book signings, gallery shows, performances, classes, open mikes, and other experiences you can't get with 1-Click. There are literary events almost daily in local cafes and bars, community centers and colleges, at our vibrant public libraries, at the riverfront chapel in Cold Spring, at historic houses and Poets' Walk Park—even in Rosendale's Widow Jane Mine, where the Subterranean Poetry Festival just celebrated its 26th year.

It's been an ongoing joy to watch all this grow from my post on Chronogram's masthead. I owe a special debt of gratitude to the talented writers who've written such stellar reviews on my watch, including Peter Aaron, Jay Blotcher, Greg Correll, Anne Pyburn Craig, Marx Dorrity, Lee Gould, Mikhail Horowitz, Susan Krawitz, Djelloul Marbrook, Jana Martin, Hollis Seamon, William Seaton, Pauline Uchmanowicz, Robert Burke Warren, and more. And Chronogram will continue to publish book reviews and profiles of local literati. It's part of the magazine's DNA, hardwired into its genes.

For the past 12 years I've been telling anybody who'd listen that I had the world's best day job. I'll miss it like crazy. But every writer's dream job is writing her own books, and I have two to finish: a nonfiction book about a year of daily walks on the Ashokan Reservoir, and a long-postponed second novel. Maybe someone will interview me for Chronogram.