The main street of Hobart, a Delaware County enclave known as the "Book Village of the Catskills," is lined with Victorian houses. One of them is purple. Surrounded by lilies, bee balm, and rambling roses, it's the home of award-winning poet Cheryl Clarke (By My Precise Haircut, The Word Works, 2016) and Barbara Balliet, her partner in life, bookselling, and the Hobart Festival of Women Writers.

Clarke sits at her dining table, surrounded by books, art, and a vintage dollhouse she just found at a flea market. She has a rich, plummy voice, graceful hands, and a thoughtful, deliberate manner, often leavened by a world-warming smile. She's eager to talk about her first full-length poetry collection in 23 years.

By My Precise Haircut's title comes from "In This Hostile Corridor," a poem that grew out of Clarke's encounter at a Jersey City KFC just after 9/11. "It was the scummiest place in the world. People were drunk; it was nasty. And this salesperson, this gay man, he really graced it. He treated everyone with respect. He looked at me and spoke as if we were in the most fabulous restaurant in the world. It was just such a haunting interaction. He knew I was a lesbian, and we smiled in recognition: "Here we are." From the poem:

How did By My Precise Haircut come to be published by The Word Works? "I guess somebody had good taste," Clarke says, deadpan.

That "somebody" was poet and contest judge Kimiko Hahn, who selected the manuscript for the Hilary Tham Capital Collection. Hahn writes, "Cheryl Clarke collects histories that are all, in effect, personal. Whether the tone is wily or grieving, wise or wise-ass, the reader is drawn closer by the page."

Clarke published three collections with Firebrand Books: Experimental Love (1993), Humid Pitch (1989, and Living as a Lesbian (1986); her debut collection Narratives: Poems in the Tradition of Black Women was self-published in 1981 and rereleased a year later by Kitchen Table Press. In 2006, Carroll & Graf published the anthology The Days of Good Looks: Prose and Poetry of Cheryl Clarke.

Born in Washington, DC, Clarke was one of five children in a Catholic family. Both parents were civil servants and Democrats, active in social causes.

Inspired by the Black Arts movement, she began writing poetry in college. "I saw the impact of poetry in changing ideas, changing people's minds. It certainly changed mine," she says, citing Amiri Baraka, James Baldwin, Toni Morrison, Lucille Clifton, and Gwendolyn Brooks as influences. "They showed me the way, enabled me to give voice to my writing ideas." Her first published poem appeared in a New Brunswick lesbian literary journal.

"I proclaimed myself a lesbian in 1973. I spent no time in the closet," Clarke says. "I began to hang with the lesbian community in New Brunswick and New York, got involved with black feminists. I met people like Barbara Smith, Audre Lorde, and June Jordan."

For nine years, she was an editor at Conditions, a feminist literary magazine. She continued to write and publish poetry, always maintaining a day job. "I had to have clothes. And food."

Clarke spent 41 years as an administrator at Rutgers University, where Balliet was an Associate Dean and professor of Women's and Gender Studies. They lived together in Jersey City, buying a second home in Hobart in 2005. Three years later, Balliet announced that she was "seriously considering becoming a bookseller." Nearby Blenheim Hill Books needed new owners. Enter Balliet and Clarke.

"Mainly it's Barbara," Clarke says with a laugh. "I price books and put them on shelves, but mostly I sit up there and do my own work." This includes fundraising for Hobart's annual Festival of Women Writers, now in its fourth year (see sidebar). Clarke and Balliet were among its founders.

"My sister Breena had this idea," says Clarke, placing fingers on her temples as she channels acclaimed novelist Breena Clarke. "She's on the board of A Room of Her Own Foundation, and she'd just come from one of their retreats in New Mexico. She said, 'Cheryl, I see us giving a festival of women writers here, so we can have something like that on the East Coast.'"

The first festival took a year to organize. They approached chambers of commerce, civic organizations, and a long and diverse list of writer friends. "Most important, the other Book Village booksellers were behind us," says Clarke. The proprietors of Hobart's six bookstores are a close-knit cooperative, often selling books for each other. When they gather for a group photo, I ask Mystery & More owner Don Dales who's minding the store. "I have a cat," he responds. 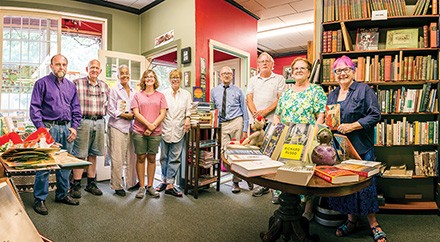 The four-legged greeter at Blenheim Hill Books is Greta, a shih tzu whose toys fill two bins in the purple house. Balliet apparently presides over its remodeled kitchen, pastel palette, and burgeoning gardens; whenever you notice some gracious detail, Clarke nods and says, "Barbara."

The couple got married a few weeks ago, after 25 years together. Does it feel different? Cheryl Clarke shakes her head. "It feels just as good as it always did." And she flashes that smile.