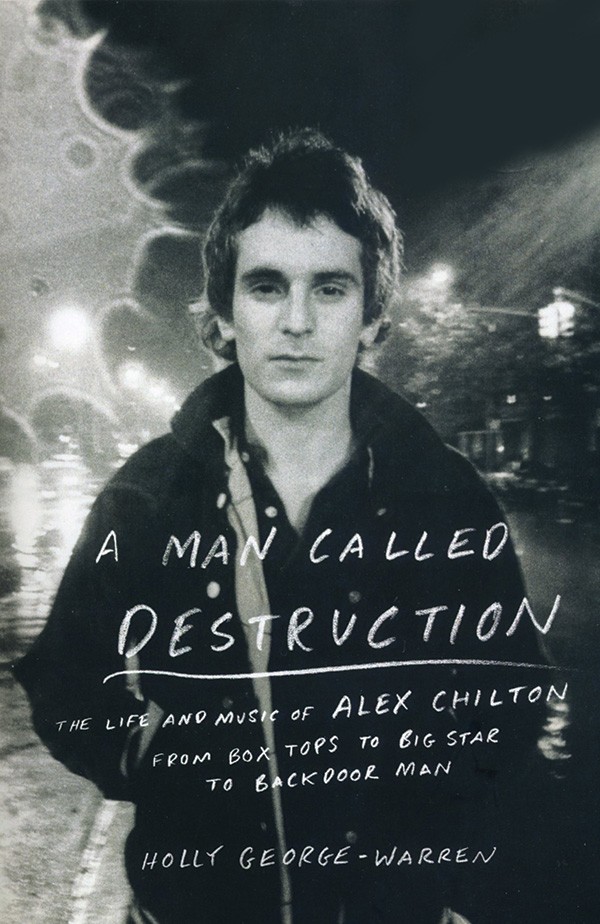 Tragic. Transcendent. Frustrating. Profoundly influential. These descriptors are forever linked to the late, great Alex Chilton. If you're a Hollywood screenwriter looking for a life story to plunder—meteoric rise to teen stardom that makes That Thing You Do look like a slow crawl; decades of unfulfilled, below-the-radar, just-about-to-break-big languishing as rock's consummate cult artist; maybe throw in some drugs and a propensity for career self-sabotage—well, here's your meal ticket. A ticket that lies ready and waiting on a silver platter—perhaps even one of the platters the singer-songwriter himself scrubbed during his late-in-life day gig as a dishwasher.

In A Man Called Destruction, award-winning, Phoenicia author Holly George-Warren (The Road to Woodstock, Public Cowboy No. 1: The Life and Times of Gene Autry, Punk 365) lays out the tumultuous ride of the Memphis rocker's 60-year life, a journey soundtracked by the wealth of incredible music he left behind.

Born to an art-loving couple whose cocktail-swigging lifestyle made them less than well-equipped as parents, Chilton found instant fame at age 16 as the growling singer of garage soul legends the Box Tops. His first-ever visit to a recording studio resulted in the 1967 number one smash "The Letter," but never again would his career attain such impossible fluke heights. Though the Box Tops enjoyed other enduring, lesser hits ("Cry Like a Baby," "Soul Deep") before splitting up in 1970, they promoted them via back-breaking tours that lined the pockets of their handlers but, hmm, somehow earned the band very little.

Chilton's next key foray was with proto-power pop band Big Star, arguably the definitive cult act. The group's melodic, raw, and darkly moving albums saw it tapped by gushing critics as the Next Big Thing, until bad business deals, tensions in the band, and the public's tin-eared taste tore it apart. Such neck-snapping ups and downs have got to fuck with your head, and, as George-Warren illustrates, in Chilton's case they sure did, making him into an infamously withdrawn outsider who chafed at the reminders of his coulda-been-a-contender status heaped upon him by well-meaning fans.

Such an impenetrable personality would naturally make Chilton a hard nut to crack, but George-Warren gets closer to his complex core than any who've made the attempt before. In a you-are-there yarn colored by over 100 revealing conversations with bandmates, friends, lovers, and others—even the subject himself, via interviews conducted before his fatal 2010 heart attack—she follows Chilton from childhood through the giddy-turning-sour rush of the Box Tops and his artistic flowering with Big Star, New York punk scene tenure, work as a producer of the Cramps and others, lionization by an entire generation of indie rockers, 1980s solo renaissance, down-and-out reclusive years in New Orleans, reemergence via the reunited Big Star and Box Tops, shocking demise, and lingering legacy.

In an ode they named for him, his acolytes the Replacements dubbed Chilton the "invisible man who can sing in a visible voice." That voice's greatness, both sonically and creatively speaking, has always been clear to fans. But now, thanks to George-Warren, the man behind it is far less murky.