Book Review: Why We Came to the City 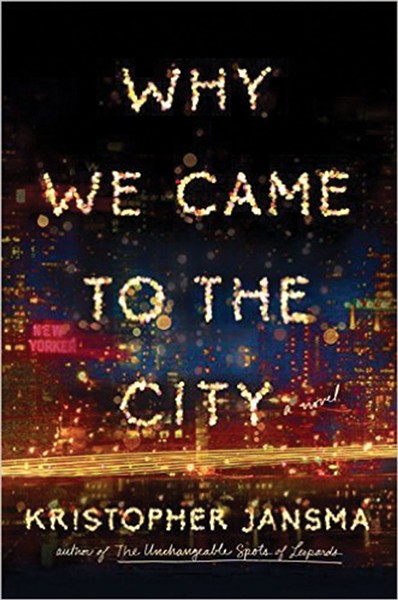 The collective ensemble as a character is hard to pull of. If the reader doesn't like the group, you've got a problem: How to pull a cynical audience through multiple hundred pages of a story? One solution is to make the setting amazing—like, "Friends" amazing—a city full of novelty, promise, and just enough challenge to make pleasures feel earned, its streets buzzing with "take me, I'm your oyster" energy. But what if readers don't relate to all that twentysomething consumption and joie de income? What if some readers fled the city in disgust, and now live quietly among the rustic oaks of the Hudson Valley?

I wouldn't put it past the very smart Kristopher Jansma (who teaches fiction at SUNY New Paltz) to think this through ahead of time. Even the title Why We Came to the City, his second novel (after his gasp-worthy 2013 debut The Unchangeable Spots of Leopards) makes a case for the post-college urban populace. Yes, these are the bright young things, buoyed through rounds of takeout and parties and spending money; self-centered, fecklessly inhaling sushi and speaking an irritating slang right out of UrbanDictionary.com. Here's a round of dialogue, early on:

"I forgot you can predict the future. You should look at my stock portfolio sometime."

"You don't have a stock portfolio. You barely have a couch."

"I've still got half my bar mitzvah money in Nintendo stocks, and don't insult the blue foldout! We bought that couch together, remember? And I've bumped more uglies on it than—"

So they're young. So they're annoying. Well, yes, one can almost hear Jansma demurring, but wait. Theirs is not a time of plenty, but of uncertainty: post-9/11 New York, newly battered by the recession. But these overgrown kids sampling trendy cocktails, they're mostly fine. And sure, they love each other, but of course they do: they cling together like a litter of pedigreed puppies. Still, make me care.

Okay, then, here's another solution: Make something terrible befall a character you simply can't dislike. A sweet person. A woman: artistic, intelligent, private, beloved by her friends. And make the malady initially worrisome, then an all-encompassing, devastating monster.

Which is exactly what happens. Among this group of five twentysomething apartment-dwellers, one becomes terribly, terribly, mortally ill, turning what was a scrappy but blithe existence into something far deeper and more mournful. And there goes the dashing metropolitan hubris of the collective, and there goes the optimistic promise of this town, and there goes this reader's skepticism.

As each character is forced to come to terms with the loss, each also comes to terms with the confines of his or her own heart. So much for the off-putting arrogance of the young. In this case, the tragedy grows them up: it renders them helpless, then rips them apart, and then it redeems them. What gives this story its appeal is that it doesn't try to be appealing until it is.

Jansma, himself once a twentyish New Yorker whose cramped but exciting life was ripped apart as he lost his sister to cancer, has a particularly sensitive ear for people coming to terms with unfathomable grief. Grief, actually, is the bridge from specific to universal, here. It makes what could have been a morality tale into something tender, human, and hard to look away from. And in the end, it puts a spin on that troublesome titular We that is both unexpected and intensely powerful. Why indeed, one asks, but already knows the answer. Just because.