Book Review: What Comes Next and How to Like It | Books & Authors | Hudson Valley | Chronogram Magazine

Book Review: What Comes Next and How to Like It 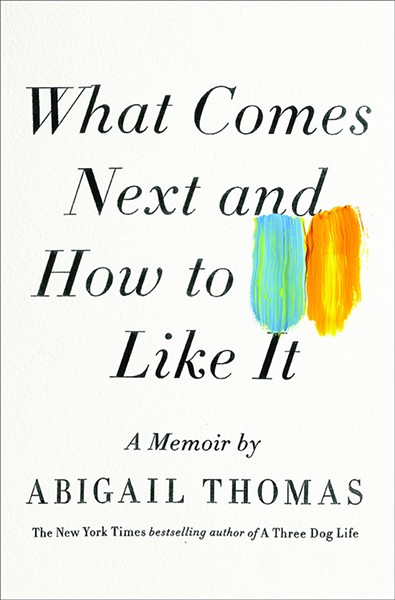 Some books are encased in slick wrapping that shrills Look at Me!, but the inside's stale and flat. Abigail Thomas's new memoir is the opposite. From the outside, it's almost plain: innocent white cover, lovely old-fashioned type. And a colorful pair of brushstrokes takes up a block of white space. The thick texture of the paint is so vivid, it looks still wet. In sun orange and sky blue, those two single brushstrokes play off the cover's black-and-white dignity. It's as if they're alive, grabbing the cover off its place against the wall to dance at the party. Take note of that.

If you know Thomas's memoirs, you know she insists on coming by her prose honestly. Composing the artifice of fiction is about as boring to her as watching paint dry—which is actually what she's doing when the book starts: waiting for a sun she's just painted to finally dry. She's been long struggling to write "about a 30-year friendship that had a hole blown through it, but somehow survived." Taking a break from toil, she paints instead, an act filled with messy joy. "I love the oiliness, I love how it spreads on the surface of the glass, how tipped at an angle it rolls and drops, and merges."

Then comes another little remark, as if we're already old friends in mid-conversation. Her beloved paint is being phased out, so she's stockpiled quarts and quarts of it. But she doesn't really need that much, she admits. "I use about a tablespoon of orange to make the sun, and I have four quarts of this color. I figure it will last me till I die."

We're not even done with page one and already Thomas has dropped two quiet bombshells on love and death. Are we settled enough to be really listening? This book is about many things, including how we hear and mishear, how we judge and then forgive, how we learn and grow and make peace with not only those we love, but also the goopy, pet-hair covered spread of life itself. Thomas, remember, is no faker. She's a master at this. Sit back.

At the heart of the story is that friendship that survived, and remains a presence throughout, comforting, refuting, answering, with the steadiness and warmth of a flannel-covered anchor. And illness: Thomas's daughter, brave and young, is fighting for her life. And family, who gather, react, cook, talk, write, say great things that Thomas, who is really listening, hears. Loved ones casually walk into one chapter and reappear a few later, coming in and out of the story like the many dogs who also populate the book. We come to adore them all, with all their flaws and foibles.

This is a book by an optimist who has a gigantic heart and has come to fully embrace the glorious mess of life. But it's also about not wanting to have to leave—knowing what comes next, trying to find a way to make peace with that inevitable mortality. When the remarkable, mind-blowing, tears-in-your-eyes conclusion does just that, we simply don't want it to be over. Don't be surprised if, when you reach that last perfect line of the book, you don't immediately jump right back to the beginning to start over again.