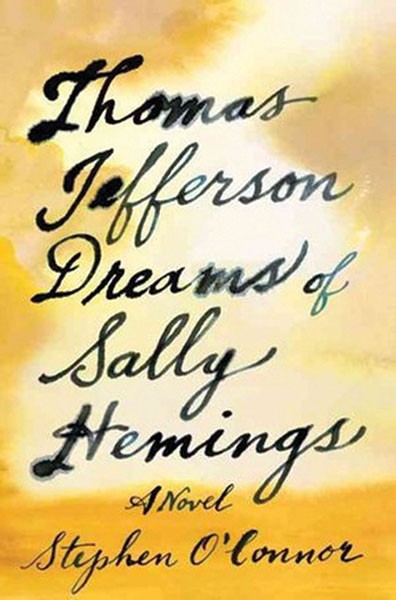 While penning the phrase "All men are created equal," Thomas Jefferson may have devoted some contemplation to the fact that he happened to own hundreds of human beings. The outrageous hypocrisy of our most free-thinking founding father has not been easy to reconcile. The walls of the Jefferson Memorial are inscribed with quotations that show the master of Monticello to have been more advanced in theory than in practice. "Commerce between master and slave is despotism," he wrote. Compounding the irony, he had children and a 37-year relationship with Sally Hemings, a slave about whom history provides few facts. Stephen O'Connor's boldly conceived novel Thomas Jefferson Dreams of Sally Hemings offers an entrancing portrait of this mysterious woman and her hard-to-fathom liaison with the famous revolutionary.

Hemings is the halfsister of Jefferson's deceased wife. They have the same white father. She has known Mr. Tom (who never lets the "servants" call him master) almost her entire life. Their intimate relations begin while he is a foreign envoy in Paris, spurred partly by his worries about the effects of masturbation. She becomes pregnant at 16. Although Jefferson's jocular comrade, Lafayette, informs her that she is free under French law, she returns to Virginia. We learn, from one of the scraps of historical source material strategically interspersed throughout these 600-odd pages, that her bloodline would have made her legally white—a point her boss/in-law neglected to clarify.

In this fictive slave narrative, Hemings' place of relative privilege on the plantation does not come without torturous interior grappling. Bromides served up by her mother, such as "It's good to have a baby with the master.... It's only you got to keep your feelings out of it," are little help. Though Hemings obtains a guarantee of freedom for their children, as her consciousness of the evil of slavery deepens, she grows to despise Jefferson, and herself.

Going beyond fleshing out the known skeletal details, O'Connor attains a continuum of psychological plausibility and historicity that is ceaselessly startling. Hemings could simply be flattering herself when she imagines the importance Jefferson assigns to her political insights, but he is undoubtedly entertained when she likens Hamilton to a rattlesnake. "Something about the quality of Mr. Jefferson's attention made me eloquent," she confesses. He pushes her to learn to read and she aspires to consume his entire library. They cannot exchange letters during his years in office, he explains, because enemies steal his mail; yet "dusky Sally" is not unknown to the world. In any event, she believes that Jefferson could, if he chose, marry her as easily as sell her. She understands that he is above the reach of laws, someone truly free. After his death, when his gruesome utopia is folding from debt and the slaves are being auctioned off, probably going somewhere worse, one impertinent customer asks, "How much for old master's whore?"

This work is bound to offend many. It does not depict Jefferson as a brutal rapist, nor excoriate him for being a complacent racist. A suffusion of empathy lightens these charges. In fabulist strokes, O'Connor gives young Jefferson an anachronistic swirl on the subway, as an art student ruminating on color theory. He also stages a chilling dialogue on human rights from inside an Abu Ghraib cell. This vastly imagined novel is clearly more perfect than its dead white subject.