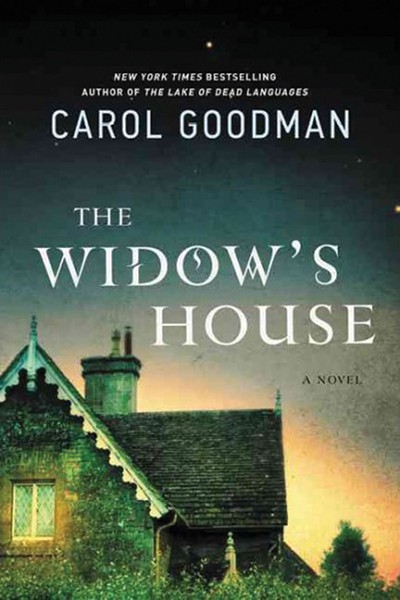 There's a burgeoning genre of fiction about Brooklyn couples who make the leap to live in the wilds of the Hudson Valley. Recent books by Robert Burke Warren (Perfectly Broken) and Bill Braine (Bone Hollow) come to mind, and now Carol Goodman's latest proves just how well a mystery mixed with a good old-fashioned ghost story can succeed in this field.

Jess and Clare are frustrated writers who originally met at a Bard-like college where Clare was a townie and Jess was one of the more worldly students a school like this attracts. But there's nothing happy about their return to the area as Jess's writing career has stalled out after one big book and Clare's has never really taken off. By becoming caretakers at their old professor Monty's river mansion, Riven House, they hope to turn all of this around, and possibly save their troubled marriage.

One of the best things Goodman does in this novel is to show how truly awful writers can be. Both Jess and Monty dramatically cut themselves off from the world to work (literally leaving Clare stranded in broken down cars unable to get help calling their cells), and Jess's petty jealousies and bitter rivalries make you swear you'd never want to read a word he writes. But while the two men in her house battle for privacy, Clare reconnects with an old high school boyfriend and researches the history of the Apple Blossom Festival, an annual celebration that crowns a young girl its queen. One previous festival in particular becomes Clare's obsession. A hundred years ago things ended in tragedy when the Apple Blossom Queen ran off with the rich heir to Riven House only to be returned to her family with an unwanted baby. Her resulting death set off other tragic events back at Riven House, creating the mystery Clair once wrote about as a college student and now hopes to solve.

It's at this point that ghosts, visions, and things that go bump in the night begin to appear. For those who love a good ghost story, especially one that takes place in familiar Hudson Valley locations, something Goodman is a pro at capturing, you're in for an excellent read. For the rest of us who might not find the supernatural to be a part of your usual literary diet, Goodman is an expert guide. The actual spirits Clare sees dissolve into explained reflections or shadow play, blood is actually red ink, and wet footprints on stairs are mistakenly Clare's own. Or were they? "None of it was real" becomes the book's mantra, but by the end, after all the plot lines collide in an unexpectedly thrilling parade of twists, Clare, as well as the reader, cannot really be sure of anything.

Like the protagonists of some recent best-selling mysteries such as Gillian Flynn's Gone Girl and Paula Hawkin's Girl on a Train, Clare is an unreliable narrator. But where those other characters' unreliability was due to alcohol, drugs, or criminality, Goodman's heroine reveals a history of mental issues—she was, in fact, born in a mental hospital—presenting a somewhat paranoid personality that is at least partially involved in her own personal conflicts and the mansion's unexplained events. Or is she? Goodman's real achievement is to tease you early on that you've already connected the dots of an old legend, a haunted mansion, and a spurned woman, three things that are never what they initially appear to be.

Carol Goodman will read from The Widow's House at Oblong Books in Rhinebeck on March 15 at 6pm.