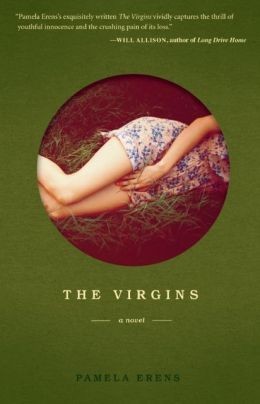 The Virgins by Delaware County author Pamela Erens takes a classic New England prep school setting—the mythical Auburn Academy—and applies intense heat, baring lots of skin and souls in the process. It relies on that perennial adolescent tour guide, the first person narrator (here, WASP-y theater-geek Bruce Bennett-Jones) and works the narrative into a masterful tour de force. The book is written by a woman inhabiting a male narrator's head—who, in turn, inhabits a female character's head—and we believe it on every level. At the heart of the story are young, star-crossed lovers, but these are unusual lovers, complicated and flawed, heading into an entirely different, more surprising fate than simply love gained and lost.

It's 1979: Aviva Rossner—short, pale, dark-haired, Jewish, clad in a purple nylon maxidress, arrives among the crewneck sweaters like an exotic flower, pulling her heavy, yellow suitcases off the bus from Chicago. (Details, from music to clothing, cars to suitcases, smelly payphones to prep school rituals, are deliciously era-perfect). Aviva's very presence casts an instant spell not just on Bruce, but the school's very atmosphere. Bruce carries her luggage, speculating, observing: "She walks ahead of me instead of following, perhaps intending me to watch her small ass shifting under the white jacket. The wind lifts the hem of her dress, pastes it against her long bare leg. The Academy flag whips around above us and clings to the flagpole in the same way. The smell of ripened apples floods the air."

This is post sexual revolution, pre AIDS, that pocket of time when sex was about how to have it and who with. Everyone's in heat. Having caught Aviva's scent, Bruce is instantly, throbbingly obsessed. Aviva, however, chooses someone else: the handsome, athletic, quietly rebellious Seung Jung. As told—speculated, really—by an older Bruce, she has a predatory but sensitive intelligence. "Aviva shifts her books to one side to make sure Seung gets a glimpse of her breasts, her waist. Already she has gathered that there's something resigned and self-doubting in his nature, something that makes it hard for him to think: me. If they part now, she will lose him." One passage lays out so much.

Aviva and Seung project unabashed carnality—the entire campus can smell the sex wafting off their skins. It's not that they intend to flaunt their coupling in everyone's face, but campus is a fishbowl, and they not only incur the fascination and resentment of students but, inevitably, the Puritanical wrath of the school's administration. But behind the scrim of these lascivious assumptions, what's actually going on between them is tearing them apart. As consequences bear down on their very private struggle, torment graduates into full-blown tragedy.

Thanks to Erens's light, efficient touch, the story has many layers without feeling like it's going to sink under its own weight. Recurring motifs quietly build: the way a story, true or not, becomes legend, how chemistry—whether desire or drugs—alters one's state of mind, how a narrator (and thus a writer) is, in a sense, a puppeteer. Parents exert pressure on their children. Outsiders yearn to feel included. And time between lovers, as Bruce observes, is different than any other kind of time. It has no substance, no weight—which enables him to reach back through all the years and tell this unforgettable tale. The Virgins is a startlingly good novel that draws on some hallowed literary traditions, and completely transcends them.

Writers Resist at the Bearsville Theater