Book Review: The Education of a British-Protected Child

The Education of a British-Protected Child
Chinua Achebe
Anchor Books, 2010, $14.95

The Education of a British-Protected Child, a recent collection of essays by Chinua Achebe, gives valuable insights into the life and work of the influential Nigerian novelist and longtime Bard College professor. Things Fall Apart, Achebe’s textured vision of an Igbo village, is the most widely read work of African literature. It reveals a world where oral history and proverbs inform daily conversations and the will of spirits and oracles governs the rhythm of life. The story’s tragic hero, Okonkwo, is a warrior and yam farmer who is destroyed by bicycle-riding, military-backed Anglican missionaries.

Things Fall Apart is in the curriculum of high schools and on the syllabi of first year college courses.  It has replaced Joseph Conrad’s Heart of Darkness as a concise, disturbing meditation on the perverse logic of colonialism—and like its predecessor, it manifests a portentous mood and an air of inscrutable relevance. In his new book, Achebe speaks unequivocally about Conrad’s racism, calling his apocalyptic classic the “pinnacle of a slave-trade tradition” and demonstrating why Conrad, as a repository of insulting stereotypes (e.g, “black incomprehensible frenzy”), is best consigned to the hands of theorists and literary historians; forcing him on young people would do more harm than good.

Achebe devotes an essay to the teaching of Things Fall Apart. Without venturing to interpret or explain the novel, he modestly offers possibilities for classroom critique. Mentioning a letter received from a student who thanked him for an introduction to the “customs and superstitions of an African tribe,” he notes an opportunity: “It should be the pleasant task of the teacher, should he or she encounter that attitude, to spend a little time revealing to the class some of the quaint customs and superstitions prevalent in America.” To Achebe, the power of literary fiction is evidenced when people from vastly differing cultural zones identify deeply with the characters and situations in his work. In an essay wittily titled Traveling White, he tells of a German dignitary who, after accepting a high post in the Namibian regime, then read his book on the plane and changed his mind about the job

Achebe’s take on Christianity, though very much in synch with his ever-judicious tone, may surprise some readers: “My father had a lot of praise for the missionaries and their message, and so have I. But I have learned a little more skepticism.” As for his choice to write in an imperialist language rather than Igbo, his indigenous tongue, he sees nothing problematic and remarks on the efficacy of English in a nation where hundreds of tribal languages are spoken. He points out that the British never made them learn it, but that without English, Nigeria could not have freed itself from its colonizer.

Among the heroes that Achebe praises in his essays are Martin Luther King Jr., Ghana’s Kwami Nguma, and anthropologist Stanley Douglas. His account of Nigeria’s Pan-Africanist liberator, Nnamdi Azikiwe (“Zik”), bubbles with emotion—and readers may inadvertently be brought to contemplate the profoundity of Achebe’s own achievements: “What I am struggling to convey is elusive by its very nature—the crossroads of history and legend at a time of transition.”

It is clear from this book that Achebe will remain relevant as our planet’s social systems and notions of community continue to transform. He offers us the precolonial wisdom of the mbari, an Igbo practice where “art is a lightning conductor which arrests destructive electrical potentials and channels them harmlessly into the earth.” 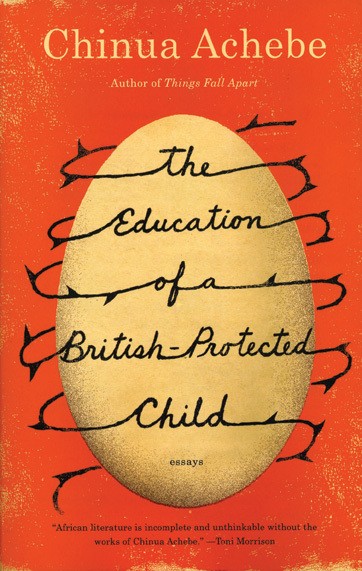