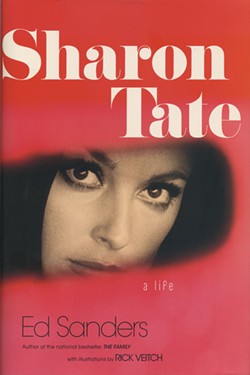 Back in 1971, Ed Sanders published The Family, a gripping investigative piece on the Manson Family murders whose complex tentacles stretched out in myriad directions, deep into the southern California of the 1960s. In Sharon Tate: A Life, the redoubtable Woodstock poet-historian revisits that era from a fresh direction, giving us a touching biography of a young beauty infernally interrupted on the very brink of her promising personal and professional prime.

Sharon Tate grew up an army brat and a stunner, a cheerleader and homecoming queen much loved by kind parents. Her beauty got her noticed: a chance encounter with a film crew in Italy brought her work as an extra. Barely out of high school, she headed to LA alone in 1961, but went back to Italy because her mom was worried. The following year, the whole family returned to the United States, and Tate began making Chevy and cigar ads and working as a wine hostess.

Even for someone hailed as the most beautiful woman in a world of beautiful women, the struggle was real. Despite a classic folkloric "discovery" by Filmways CEO Marty Ransohoff—the very words, "Baby, we're going to make you a star!" were spoken—she paid her dues with bit parts in TV series and extra jobs. From everything Sanders was able to discover, she did it with fortitude and good humor. She soon took up with Hollywood hairstylist Jay Sebring, in whose company she would later be murdered.

The Swinging Sixties were just ramping up, and the Hollywood Sanders captures in the book's early chapters has an almost fresh-faced feel, probably because of the references to TV shows like "Petticoat Junction" and "Mr. Ed." Interwoven with Tate's ascent, Sanders traces the rise of a brilliant young Polish filmmaker named Roman Polanski, who would ultimately win her from Sebring and be devastated by her death.

By the late '60s, that veneer of innocence had been sandblasted by the rise of the counterculture. The entertainment industry was a swirl of drugs, Satanism, kink, and double dealing. Tate seems to have been in it but not of it, emerging as smart, kind, and likely to succeed. Unafraid to take her top off for Playboy or give her all in cheese like Valley of the Dolls, her sights were set higher; she admired Faye Dunaway and Catherine Deneuve, and was exhilarated by the prospect of motherhood.

Sanders is meticulous and affectionate in his chronicle, its tone dry, wry, and journalistic. By its very nature, this is a story full of gossip, hearsay, and the musings of the famous and infamous; in several places, Sanders was given more than one version of a story and faithfully reports all he knows, leaving the reader to draw her own conclusions.

As the summer of 1969 seeps into its dog days, Sanders juxtaposes the Manson Family's descent into absolute unholy hell with Tate's delight in her pregnancy and Polanski's exuberant work on Day of the Dolphin. Was Tate specifically targeted? What were Manson's true motives? No one truly knows the answers, but Sanders has tried harder than anyone living to figure it out, and his exploration of all available sources is a fascinating look at chaotic times and a fitting tribute to a life cut brutally short.

An Afternoon of Poetry with Ed Sanders July 1

Book Review: Fug You: An Informal History of the Peace Eye Bookstore, the Fuck You Press, the Fugs, and Counterculture in the Lower East Side