The Incredible Story of How Wildlife Comebacks Turned Backyards into Battlefields 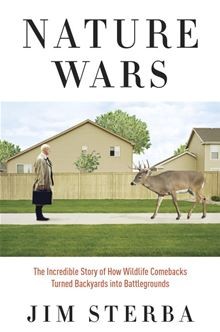 Here's something you might already know: Connecticut is the fourth most densely populated state in the US. Here's something you may not know: Sixty percent of the Constitution State is covered in trees. John Gordon, former dean of the of the Yale School of Forestry, jokes about this dichotomy in Jim Sterba's Nature Wars: "If you looked down from Connecticut from on high in the summer, what you'd see was mostly unbroken forest. If you did the same thing in the fall after the leaves have fallen from the trees, what you'd see was stockbrokers."

Most people in the eastern half of the US live in the woods. Not the primeval forest of our collective imagination, but a patchwork of green broken up by roads, housing developments, office parks, and shopping malls. While much of the world is being deforested, the Northeast and Midwest have added 11 million acres of trees since World War II. This greening of the landscape is the result of two major forces: the conservation movement, birthed in the 19th century as a reaction to the devastating toll on the country's flora and fauna by rapacious overconsumption, and the abandonment of the rural family farm for urban and suburban life.

Among the trees and the homes and the parking lots, you'll also find sizeable populations of deer, Canada geese, raccoons, turkeys, beavers, and feral cats that did not exist 50 years ago. These animals have thrived in suburbia, feasting on the abundant food in our backyards (in some cases intentionally provided by animal lovers) and safe from predators in the ecosystem of sprawl.

Nature Wars is an entertaining, anecdote-rich account of the Great Eastern Forest's miraculous recovery and the challenges it now poses for historically high numbers of humans and wildlife in a shared environment. Sterba, a longtime national affairs correspondent for the Wall Street Journal and a Dutchess County weekender, is a knowledgeable tour guide in the terrain of vehicle-deer collisions (4,000 per day in the US), feral cat lobbying groups, the burgeoning nuisance-wildlife industry, and a mostly denatured citizenry that spends 90 percent of its time indoors.

Case in point: In 1999, the Putnam County town of Kent hired wildlife control contractors to remove Canada geese from Lake Carmel. An earlier questionnaire indicated that 80 percent of town residents were in favor of culling the geese, who were generally viewed as a nuisance—pooping in the park surrounding the lake, fouling the water and supposedly lowering property values. One morning, 125 geese were rounded up. They were taken to Long Island, where they were killed; the meat was donated to the United Way of Sullivan County's food pantry. Later that day, protesters gathered in Kent, and in front of TV cameras held placards referring to the town's ranking politician, Annmarie Baisley, as "Baisley the Butcher." A year later, Baisley was still receiving hate mail and death threats.

Americans are generally opposed to hunting and trapping. Although 10 million hunters take to the woods each fall and kill about six million deer, this massive culling is not nearly enough to manage the population of 30 million whitetail in the country. Sterba quotes a Princeton University professor who opposed the thinning of the whitetail herd on campus by professional sharpshooters in 1989: "After seeing Bambi nobody wants to kill a deer."

The problem with not killing these animals, according to Sterba, is that other means of population control—contraception and relocation mainly—don't work, and the ecosystem of sprawl and exurbia won't manage itself. Sterba makes a strong case, based on extensive research and interviews with wildlife managers, that humans are the only predators these animal populations have, and if we want to control their numbers, the most effective way is to kill them. He maintains that if Americans reconnected with the environment outside their homes again—by getting "dirt under their fingernails"— rather than watching the Discovery Channel, we might better understand why human oversight of the natural landscape is crucial to our lifestyle and the survival of animals and forests. Appearing 1/13 at 4pm at Oblong Books & Music, Rhinebeck.