Book Review: Money For Nothing

February 25, 2010
Last Updated: 08/13/2013 4:03 pm
comment
The events of the past 18 months or so have left a lot of people scratching their heads. First there is money, then there is no money, then there is, although not for the likes of you and me. Big financial corporations are behaving like children who know that now that Time Out is over, Mommy will hand over the entire cookie jar—and Mommy would seem to be in denial about her big baby’s lack of repentance.

Can they all be that mean-spirited and treasonous, not to mention tone-deaf to public opinion? Who are “they,” really, anyway? John Gillespie and David Zweig, both Harvard MBAs, have an intimate perspective, and have been privy to some extremely candid moments. Columbia County resident Gillespie spent 18 years as an investment banker with Lehman Brothers, Morgan Stanley, and Bear Stearns; Zweig was most recently senior editor at the World Business Academy. Their book will leave you feeling educated on what really goes on in boardrooms, and armed with some useful ideas for what needs to be done.

Boards of directors are the focus of this book, and as we all know, any group is only as useful as the people in it. To the inherent difficulty of group dynamics, a directors are often chosen for name recognition or to repay favors, rather than due to actual qualifications—a recipe for disaster.

Boards are supposed to ride herd over the same people who hired them as directors in the first place. The legions of accountants, attorneys, and consultants who are well paid to keep an eye on things tend to coddle the goose that’s laying their personal golden eggs, even if that leaves thousands of shareholders with a garden variety goose egg.

The authors bring us behind closed doors on page one, with a look at what it’s really like inside a failing corporation during its deathbed hours. As executives themselves, the authors do not pull their punches, but they write without hate—surely the only way to understand anything. They peel layer after layer from the onion, explaining how directors are chosen, how they interact with CEOs, and how shareholder power can be manipulated into nonexistence. Informing their business expertise with psychology, group dynamics, and studies of decision making, they’ve created a lively read. The role of emotions in hijacking thought processes? Who knew? Maybe the folks on the top floor really are just like us.

Regardless, Gillespie and Zweig aren’t letting the puppet masters off any hooks. Chapter eight is 40 densely packed pages of “Solutions”—ways boards can be made to do in practice what they do in theory: protect shareholders’ investments and throw on the brakes when things get ill advised. We learn how some have managed, Lazarus-like, to come into healthier and more functional second lives after catastrophe. The authors’ suggestions are many and detailed: more transparency at every level, regulatory reform, reducing the potential for conflicts of interest that plague lawyers and accountants. And they seek to enlist us to their cause—at least those of us who hold stocks. Shareholders “must awaken and participate,” they remind us, ending on the hopeful note that “if we expect and demand more of them [boards of directors], they will rise to the challenge and answer the call.” 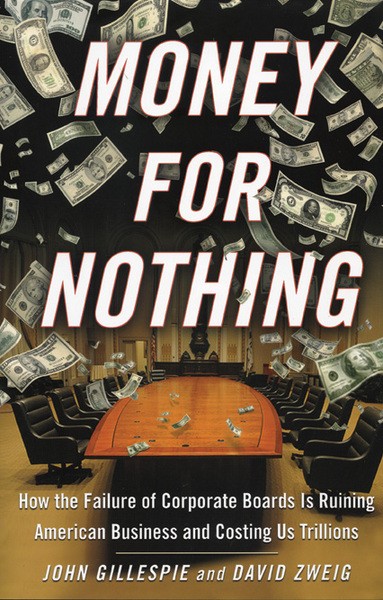