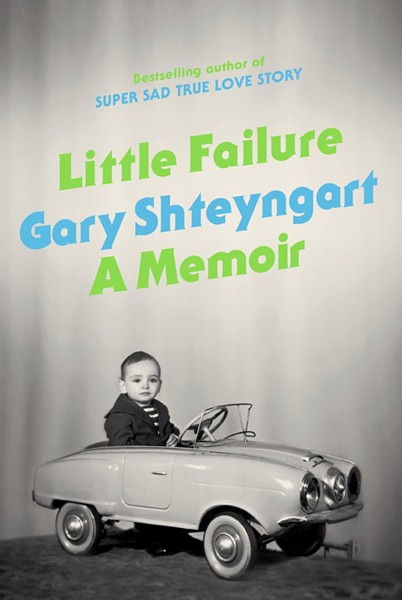 In his 2002 debut novel The Russian Debutante's Handbook, Red Hook's Gary Shteyngart introduced hapless hero Vladimir, the author's Russian Jewish immigrant doppelganger, nicknamed "Little Failure" by his perpetually disappointed mother. Surely, the nickname is pure fiction. What real-life mother would affix such a moniker to a child, and why? After two more satirical novels, numerous New Yorker essays, thrice-weekly psychoanalysis, and literary celebrity, Shteyngart's new memoir Little Failure reveals that his mother not only dubbed him thus, but she also invented a Russian-English word to do so: Failurchka. His father called him Snotty—a reference to his debilitating, unforgivable asthma—and Weakling. Then there's the physical abuse, rendered when the troubled family trio lived in Leningrad and after emigration to Queens in 1979, when Gary (born Igor) was seven.

Shteyngart casts these offenses as bits of experience that, over time, become crucial chapters in his development. Often, he presents painful situations with just enough distance to make them funny without losing bite. Little Failure is also a kind of adventure story: How will Gary survive this family dysfunction, the source of much of his rage and anxiety, and reconcile with his failed opera-singer-turned-engineer Papa, and pianist-turned-file clerk Mama? The narrative jumps back and forth in time, so we know early on that he and his parents are, surprisingly, not estranged. How? Little Failure plots that touching trajectory.

Along the way, Shteyngart coaxes empathy and compassion not just from himself, but from his reader. This is handy, because come puberty, he is often an asshole. That's a lot of magnanimity to conjure, but with Shteyngart as your guide, you'll manage. He rewards faith with prose potent and smooth as high-grade vodka, often funny, but also incisive, and wrought with a contagious affection for flawed, passionate people.

Shteyngart quotes Polish writer Czeslaw Milosz: "When a writer is born into a family, the family is finished." Yet, despite his parents' fears about his disclosures ("Tell us," his father asks when publication of Little Failure is imminent, "how long do we have to live?"), Shteyngart humanizes the couple. He investigates his parents' pasts, and these passages, delving into his relatives' intimate ties to Stalin-era atrocities (most died, horrifically) and subsequent Soviet oppression, add considerable gravitas to his compulsive hilarity, relieving his parents from caricature. Shteyngart also treats us to Lenin and His Magical Goose, a novella written when he was six, in which Lenin and a socialist goose conquer Finland. His doting grandmother commissioned it, paying him a block of Soviet cheese for each page, a lesson of cause and effect he never forgets. (Protectively, his parents allow him to worship Lenin, revealing nothing about their disillusionment with their government until the day they emigrate.)

Shteyngart's storytelling mojo becomes his ticket to nerdish popularity at Hebrew school and Stuyvesant High in New York. He masters English quickly. He spends much of his time at Oberlin College in a pot-and-alcohol haze, where his out-of-control personality earns him the sobriquet "Scary Gary," and where he produces reams of writing and, at last, finds (doomed) love. Our worry for him and his put-upon friends extends into his post-college life in Manhattan, where a kindly benefactor eventually loses patience and insists Shteyngart get intensive psychotherapy, which saves his life and inaugurates his career.

Eventually, Shteyngart and his parents return to Leningrad for a revelatory homecoming. All that has come before dovetails with striking grace, elevating Little Failure to an act of love—for his parents, his story, and Shteyngart himself.