Book Review: “Literchoor Is My Beat”: A Life of James Laughlin, Publisher of New Directions 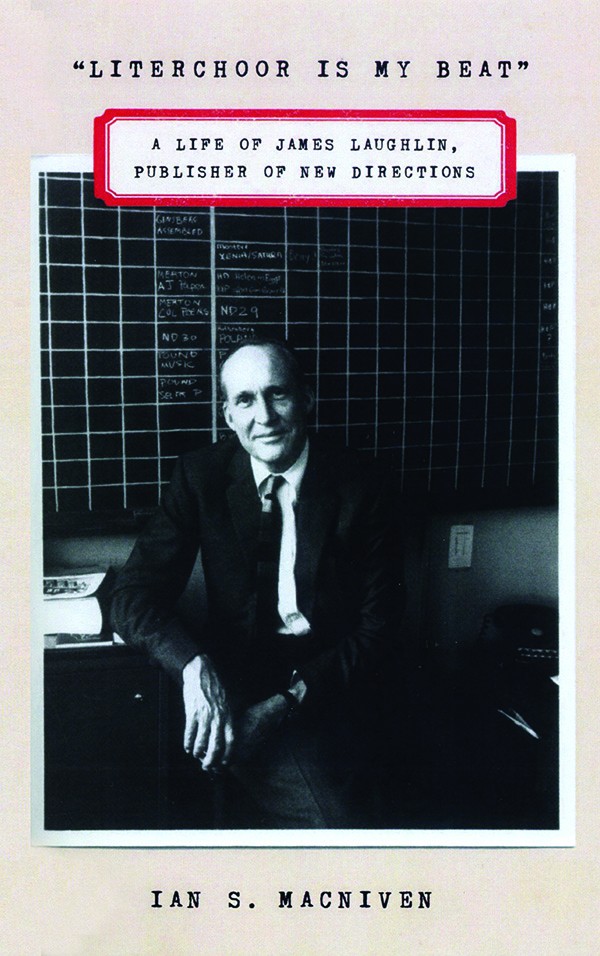 As a Harvard undergraduate in 1936, poet James Laughlin launched the avant-garde imprint New Directions. Destined to become the most influential US publisher of the 20th Century, he was already a staunch modernist as a teenager, imbibing scores of limited-run titles ordered by mail from Francis Steloff's Gotham Book Mart. Yearning for a guru, he bee-lined to Rapallo, Italy, after his freshman year and met with Ezra Pound, the expatriate bard who presided across continents as a supreme arbiter of all things poetic. The well-known story, one Laughlin told often, is that Pound discouraged his ambition to write verse, advising him to do something "useful"—meaning, put his energy (and money; his family was huge in Pittsburgh steel) toward keeping the truly original voices of the era alive and in print.

In a new detail-rich biography, Hudson Valley resident Ian S. MacNiven questions the veracity of this anecdote, and suggests that the departure from fact by his usually reliable subject offers a skeleton key to his complexity. One might infer Laughlin's dread of artistic mediocrity, but the legend affirms his commitment to Pound's mission, and belief that literature is crucial to a society's well-being. MacNiven's title, Literchoor Is My Beat, is taken from a 1946 letter where Laughlin, leery of censors, tells Pound, who's just been arrested for treason, not to write to him about politics. His imitation of the master's folksy phonetic spelling reveals an affectionate rapport that remained intact through Pound's long confinement in a Washington, DC, asylum.

The New Directions wagon hitched its first star with Pound's compañero William Carlos Williams. Even though Laughlin saved the Rutherford pediatrician from dropping off the map, the wise poet had reason to doubt the younger man's seriousness. When Williams's novel White Mule received an unpredicted flurry of attention, the publisher was off skiing in the Alps, missing the opportunity to ply bookseller demand. (No dilettante as a skier, Laughlin might well have competed in a national downhill championship if not stopped by an injury.) While nurturing a list of sensitive geniuses that included Dylan Thomas and Henry Miller, he took on a second low-profit venture, pioneering the Alta Ski Resort in Utah. Doc Williams considered him reckless, but others, like Tennessee Williams and Gertrude Stein, were enchanted by the lanky mountaineer.

In its decisive first decade, the mercurial Delmore Schwartz was on New Direction's payroll. The hungry writer may have wondered why the son of a great American fortune operated with frugality more befitting an immigrant deli owner. MacNiven documents New Direction's steadily increasing sales, but is vague on the larger money question. Interestingly, the beautiful, stark black-and-white covers that still attract young poets like ore from another galaxy were the result of Laughlin's decision that color ink was too expensive.

The next major poet to advise the publisher, Kenneth Rexroth, was a great appreciator of Laughlin the ascending poet. MacNiven notes that Laughlin's vernacular sensibility was rooted not only in his imagist elders but also in Roman lyric. The saintly, multifaceted provocateur, who called Thomas Merton his "doppelganger," printed Virgil's Fourth Eclogue, an ancient prophecy of renewal, for friends at Christmas during WWII without indicating that the brilliant translation was his own.