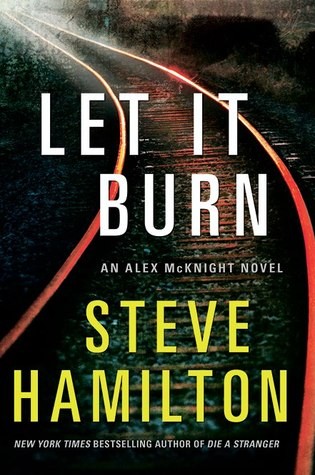 Cottekill author Steve Hamilton lays no claim to being a sociologist; nor does his intrepid investigator, Alex McKnight. Yet just a few chapters into Let It Burn, the reader is off on a journey that reveals more about the decline of the great American city of Detroit than a dozen learned treatises on urban decay.

McKnight used to be a Detroit cop, a young patrolman of great promise in a city that “was a wobbling prizefighter, holding onto the ropes with one hand, but nobody was counting it out yet.” That life exploded in his face, taking his marriage with it and leaving him with a dead partner and a bullet too close to his heart to be safely removed—just one of the many pitch-perfect touches that make McKnight such satisfying company. He’s dogged, relentless, and crazy brave, not just in the sense of physical derring-do (though he’s still pretty agile for an old guy), but in terms of being unafraid to take every individual he encounters on their own terms, without fear or favor.

Now McKnight lives in the Lake Superior town of Paradise, about as remote as a place can be within the continental United States. It’s a quiet life and he likes it that way. The mere fact of a phone call from his long-ago sergeant wouldn’t drag him back to Detroit, nor would the news that the convict he helped bust for the gruesome slaying of a young woman is being paroled. But there’s also a female FBI agent he’d like to see again. It’s time for a road trip, filled with memories of that last dramatic case. And here is where McKnight shows the heart and brilliance that we would wish for in all law enforcement personnel and too seldom get: He connects with the mother of the man he put in prison, human to human, and certain things about the case begin to bother him.

To begin questioning the justice of what took place all those years ago and wondering whether a brutal killer walked away is an inconvenience so massive, a tangle so thorny, that a lesser man would turn tail and head back to Paradise to drown those notions in ice-cold Molson Canadian. Not our Alex. He half dives in and half gets drawn into this latest strange situation, paying a heavy price in memories and reflections. His gift for dealing with humans draws him back into the lives of the key players in that long-ago murder case and ever closer to dangerous truths.

Two-time Edgar winner Hamilton’s graceful moves are such that the plot barrels along enhanced rather than encumbered by the philosophical reflection and meticulous sociology. We’re schooled in the gritty poignancy of dying cityscape and the realpolitik of law and order without stopping for breath as the body count rises, as the machinations of the present-day cops, the FBI, and the real killer—whose identity comes as the kind of shock that looks inevitable only in retrospect—swirl around McKnight like a lake effect blizzard.

Any lover of smart thrillers could do no better. Hamilton is emerging as a transcendent master of the form. Alex McKnight’s ongoing adventures and his lovingly sketched mindscape are, as usual, a reader’s trip to Paradise.