June 28, 2010
Last Updated: 08/13/2013 4:07 pm
comment
Perhaps there are some who truly believe that 100 years ago, children were innocent, teen girls were chaste, parents were all-knowing, and capitalism hummed along sleek and shiny. That kind of foolish revisionism, of course, never does hold up to a closer look, no matter what era we’re talking about: Real life has always been messy, conflict-ridden, tragic, and wonderful.

Rebecca Chace, whose résumé includes teaching writing at Bard College, is gifted with a keen eye and ear for real life; in this novel, it’s the real life of a New England mill town. Coming of age right along with the 20th century is Frankie Ross, a young woman with intelligence, spirit, and a vast well of feelings that she barely understands herself, even while following them headlong.

The Ross family moves to Rock Harbor to allow Papa to get a fresh start. Papa is what we moderns would probably diagnose as bipolar, and his suicide attempt has somewhat devastated his 14-year-old tomboy daughter and deeply devoted wife. Resilient folk, they pull up stakes in Poughkeepsie, where they’re surrounded by kin, and start over in the shadow of the mill.

Frankie, who’s never been encouraged to think much of herself by her boy cousins in Po-town, is promptly taken up by not one but two boys: Winslow and Joe, best friends from the opposite sides of the tracks. Winslow’s father is a state senator. Joe is Portuguese (locally “Pawtugee”), working a weekly shift in the mill; their friendship transcends social barriers, and their playful energy enchants Frankie completely. It is through their eyes that we—and Frankie herself—see her emerging beauty.

Frankie is a hugely loveable blend of wisdom beyond her years and nervously snarky adolescence. Teen life is no simpler to navigate for her than it is now or ever has been, from butting heads with her mom over corsets to comprehending the apparent word on the street that Poughkeepsie girls are up for anything, and the contradictions inherent in the current local flavors of racism.

Then, as now, war and sex and alcohol and the need to make life decisions cast huge shadows over teenage lives. Frankie is molested and cherished, miserable and joyous, empathetic and thoughtless; she may not make the “right” choice at every turn, but Chace makes sure we feel the pressures that are moving her.
Then, as now, people faced maiming and premature death, postpartum depression, and financial reversal. Then, as now, lives were shaped by their responses and choices, pieced together into complicated patchwork crazy quilts of interaction. Chace has an elegant and natural voice that never gets in the way, lending insight without shoving it down the reader’s throat. What might have been melodrama —She Loved Two Men!—emerges instead as  a natural evolution, and the three good-hearted souls who’ve grown up together do their best to cope gracefully, as decent people always have and always will.

At novel’s end, Frankie is making a decision that is bold and completely life-altering and likely to scandalize everyone. But we are not “everyone.” We are looking at this through her eyes, comprehending, and wondering what memoir her young son Geoffrey might write one day. 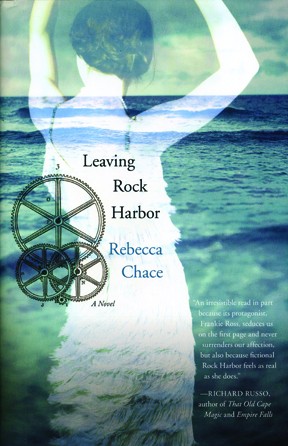