Book Review: It's Beginning to Hurt 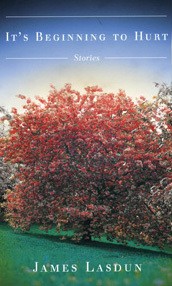 Writer James Lasdun picks at scabs. That is, the scabs resulting from the psychic wounds of the vibrantly damaged folk who people his writing. In his new volume of short stories, It’s Beginning to Hurt, however, the Woodstock-based scribe’s technique is so surgical, so humane, that any accusations of sadism are brushed aside. Instead, the reader luxuriates in the revelations of these common lives.

The sixteen stories in this collection include the British award-winner “An Anxious Man,” an unsettling tale of parenthood and fear, a common confluence in an era of recurring amber alerts. In each tale, Lasdun—most often the omniscient narrator—fearlessly dissects our modern malaises, whether they stem from unsteady family relations, hapless career goals, or the quest for purpose in a fragmented world.

The author troops us knowingly through emotional land mines. In “The Natural Order,” mousy Abel is consumed by his ailing marriage, even as a trip to Greece offers tantalizing opportunities for stepping beyond its confines. Martin Sefton, a teacher of classical guitar whose own musical career falters in “The Half Sister,” resists the manipulative, well-heeled parents of his young student. Roland, still mourning his mother’s death in “Cleanness,” travels to attend his father’s wedding to a younger bride.

Lasdun sets down his characters in vivid landscapes: Manhattan’s West Village, the English countryside (a country estate near Mayborough, a pig farm outside of Suffolk), a rural slice of the Mid-Hudson Valley, and several small villages and seaside locales in Greece. The wide array of locales is not mere contrivance: Lasdun describes each one so aptly that the sense of place resonates fluently. This same assiduous research allows Lasdun to bestow upon his characters densely detailed lives. “A Bourgeois Story” offers historic timelines and rhetoric from a Communist’s political crusades; “Oh, Death” explains which equipment a mountain dweller will use to clear fallen trees and transform them to kindling; and “Cranley Meadows” illuminates matters of astronomy and reproductive therapy.

These tutorials are never grafted awkwardly onto the story, but appear seamlessly, lending a nonfiction feel to the proceedings. Lasdun’s crafting of extensive inner lives is matched by his effusive creation of external landscapes. A profusion of trees, plants and flowers appear in most stories, each identified in lavish botanical detail.

Nor does Lasdun stint on style. As a man swims, he feels “ropes of cooler water slipping around his ankles.” Later that night, the lake is “dimpled here and there by rising fish.” A father looks in on his sleeping child, “her hands either side of her head like two little starfish.” Lasdun is equally penetrating as a sociologist. In “The Incalculable Life Gesture” his description of the moral vacuity of modern New York City (the London expatriate’s previous home before settling in Woodstock) is damning, but no less accurate for its harshness.

A minor quibble: the author’s writing voice maintains the same high tone throughout, whether as narrator or when inhabiting a single character. Unfortunately, Lasdun’s erudite (and occasionally starchy) wordplay proves incongruous for some characters and imparts a troubling sameness to their thoughts and observations. But forge ahead to the title story. It’s a common tale—the death of romance after years of marriage—but Lasdun captures its tragedy so succinctly in a mere three pages that you’ll find yourself fighting for breath. After absorbing this emotional wallop, you will forgive him anything.