Book Review: In the Fullness of Time

Love, loss, living on—that’s the inevitable pattern of life. But it’s the accrued effects of all of this resilient shuffling along our shared mortal coil that inspired anthologists Upham and Gravenson to solicit musings on the subject from 32 women across the globe.

These essays, poems, and interviews are offered by a red-letter assortment of novelists, actors, editors, poets, and journalists ranging in age from 50 to over 100. Acclaimed novelist and Woodstock resident Gail Godwin is a contributor; so are gynecologist Christiane Northrup, journalist Jenny Allen, and actor Jane Alexander, and they’re all digging deep to dialogue about the part of a woman’s life journey that comes after mate seeking, child rearing, and often, career. Six are Hudson Valley residents, and, in fact, the seeds of this anthology were sown in a women’s writers group in Rhinebeck.

Some writers dish advice: Take care of your teeth because it’s not fun to outlive them; give up anxiety; poke some fun at yourself. Others circle around the challenges facing a phase of life devoid of the easy privileges of youth.

“When we’re young we tend to think that old people were born that way. That it’s somehow a choice,” writes playwright Tina Howe. “Then suddenly we hit sixty-five, seventy-three, or eighty-two and wonder what’s going on. That isn’t us in there! It’s someone else! Construction workers suddenly don’t whistle at us anymore and waiters call us ‘Ma’am’ instead of ‘Legs’ or ‘Sweet Thing.’”

Youthful beauty can be a free pass on the make-something-of-your-life ride, but only for a while, says journalist Vivian Gornick. “For a woman, existential terror is the aging face. When a woman looks in the mirror and sees herself smooth and young, she thinks, ‘I’m not accountable. I don’t yet have to explain or justify my existence. It doesn’t matter yet that I’m not taking responsibility for my life. I still have tomorrow.’ When she looks in the mirror and sees herself lined and hollow-cheeked, she thinks, ‘Tomorrow is here. Now I’m accountable. Now I must do it. Can I? More important, will I?’”

Anthologist Upham, a former concert pianist sidelined by injury, was originally attracted to the subject of female aging through the lens of loss, but this is not the book’s ultimate focus, nor the final destination of many contributors. Ultimately, triumph is the hub here—over other people, self, illness, bereavement, and diminishment.

In fact, says Woodstock memoirist Abigail Thomas, it’s the unexpected gains of getting older that she’s found most surprising, and the potential insertion of old comforts, such as male companionship, that can be most discomforting. “It has taken me the better part of sixty years to enjoy the inside of my own head, and I do that best when I’m by myself,” she writes. “ I am smug. I am probably insufferable. And then the telephone rings.”

Aging, says Vivian Gornick, can either be seen as a downer or a source of stimulation, and she prefers the latter path. “That way, loss is transformed into wisdom and life continues to provide adventure.” Writes Upham in the foreword, “Living on, never mind living well, is often life’s reward. One of the great gifts of experience, however, is the ability to choose—not our circumstances, but how we interpret them.” 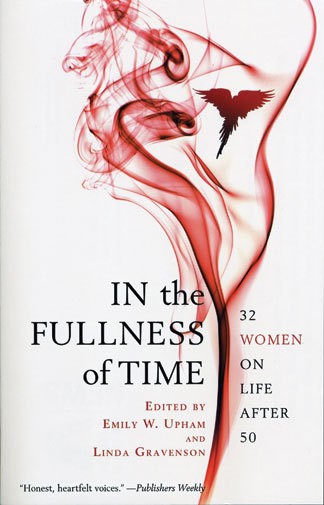