Book Review: Give Me Everything You Have | Books & Authors | Hudson Valley | Chronogram Magazine

Book Review: Give Me Everything You Have 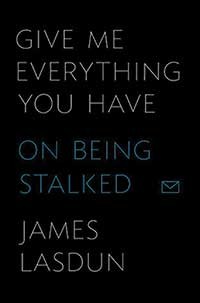 Every day, people discover what the Internet can do for them. Less obvious is what the Internet can do to them. Yes, it can enmesh humans across the globe, inspiring tribal loyalty and charity; it can open portals to education, entertainment, and commerce; but it can also give rise to dark angels hiding in a sociopath, angels for whom creation and destruction are two sides of one coin.

Such is the case with "Nasreen," self-anointed "verbal terrorist" and Iranian-American former student of Ulster County poet/novelist/screenwriter James Lasdun. His book Give Me Everything You Have is, in part, a spellbinding account of Nasreen's cyber-attacks. She barrages Lasdun, a non-observant Jew, with frequently anti-Semitic emails and slanders him on Amazon, Wikipedia, and Goodreads. She also fires off invectives to his employers, accusing him of rape and plagiarism.

The story begins when Lasdun allows a student-teacher relationship to morph into a peer-to-peer correspondence. (Nasreen's in her thirties.) Although their friendship begins in a workshop, they converse mostly via email. Nasreen's missives become increasingly flirty, Lasdun's ever more reserved. He rebuffs her, and Nasreen snaps. An unrelenting fugue of delusion swirls up from her fingertips, in which Lasdun is the focus of myriad grievances, both personal and political. The more Lasdun ignores Nasreen, the heavier the onslaught. Police, the FBI, lawyers, and his wife advise him not to block her, in case she forecasts a horrific plan to be enacted in the physical world. In the meantime, due to the current "Wild West" nature of the Internet, no one can stop her.

Lasdun is honest about his own motives and prejudices, admitting that he may have subconsciously overlooked some red flags while basking in Nasreen's epistolary enthusiasm. Her fascinating back story of fleeing the Shah may have distorted his focus; her "demure Middle Eastern woman" persona, he allows, is partly his own creation.

She's far from demure. Nasreen is tirelessly malicious, emboldened by the un-policed terrain of the Internet. Despite a detective mentioning "borderline personality," Lasdun shies away from labeling Nasreen "mentally ill," and that's refreshing. To do so would give her vindictiveness the excuse of pathology, which would supplant much of the fascinating cultural influences he investigates, and insult this story with tired psychobabble.

So Lasdun despairs, flailing in constant damage control mode. The 21st-century fear of slander, he says, is ironically like bygone days, when artifice was king. "The Internet," he writes, "with its arbitration of reality, is an indiscriminate tumult of truth and lies...the zone in which our public identities, our outer selves, once again [begin] to assume their definitive form." At the close of the first third of Give Me Everything You Have, he's a mess.

Just in time, the book takes a sharp turn into memory, self-analysis, and travelogue, offering a welcome break from Nasreen. We traverse beautifully rendered episodes of Lasdun's childhood, tagging along as he interweaves "Sir Gawain and the Green Knight" with Freud's examination of Judaism and D. H. Lawrence's peccadilloes. We accompany him on work pilgrimages to D. H. Lawrence Ranch in New Mexico, and to troubled, provocative Israel.

Why the detours? Returning to Nasreen, Lasdun has reframed his trauma: through force of artistic will, he's broadened the context of his suffering. Turning from the tyranny-fostering abyss of the Internet, he creates a vista of story, independent of a computer screen, and wide enough to contain the fire of the darkest angel. Reading 2/16 at 4pm, Golden Notebook.

Art of Business: Q & A with John Carroll, Healer

The Berkshires Get Reel

An Untitled Photo by Camille Hebert