Book Review: Getting a Life With Asperger's: Lessons Learned on the Bumpy Road to Adulthood 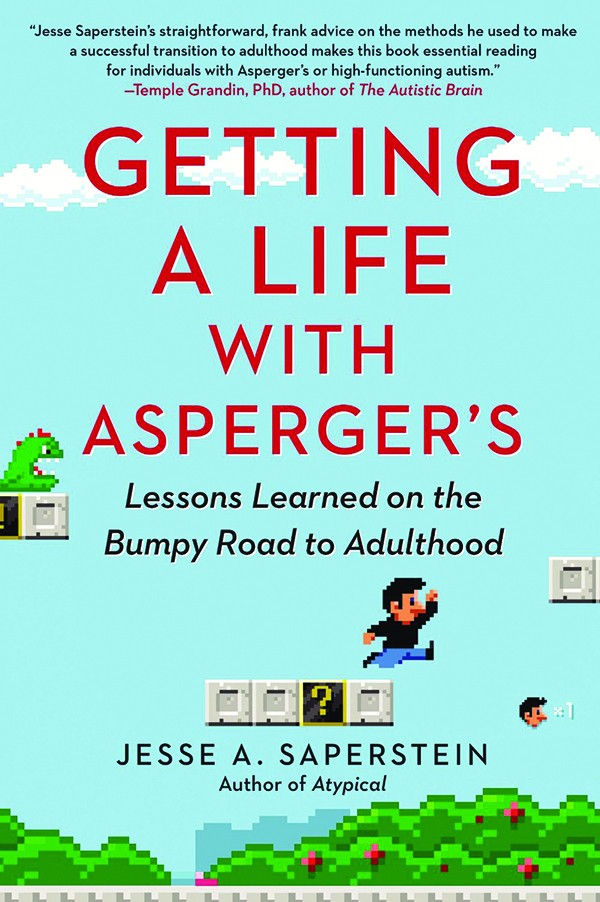 Generations of parents, educators, and counselors have speculated on what is going on with a child who's acting out. Jesse A. Saperstein wastes no time in telling us: He was that kid, growing up in the Dutchess County suburbs, and here's what it was like to be him. The gap between child and adult, between authority and "disruptive influence," causes so much grief in itself that, had Saperstein accomplished little else, his work would be invaluable.

But that's far from the only communication gap he addresses. With clarity, honesty, and compassion for all concerned, the author of bestselling memoir Atypical: A Life with Asperger's in 20 1/3 Chapters takes us on another journey to the other side of the interface between "neurotypical" individuals and people on the autism spectrum. The book is written as self-help for people with Asperger's, and it makes a great read for anyone who's ever wondered what having Asperger's feels like from inside.

Right from the introduction, in which Saperstein makes a strong and excellent case for SpongeBob being on the spectrum, we know we are in the hands of that all-too-rare creature: a brilliant wiseass with malice toward none. His light touch with potentially heavy subjects is sheer fun to read.

Saperstein's wealth of suggestions about taking the helm of one's own life would make a great life-skills curriculum for any young adult. Poor time management, scam artists, credit card debt, and video game addiction are stretches of modern quicksand that can trap any unwary youth. Adjusting to college life, handling romantic rejection, and coping with job interviews are near-universal challenges for bright, sensitive kids, and Saperstein's advice is spot-on. On topics like transcending the scars left by bullies and healing rifts between siblings, he offers practical ideas that are all the more profound for their simplicity.

Blunt, and kind-hearted about the ways in which typical Asperger's behaviors impact interaction with other human beings, he has the gift of seeing the issues involved from both sides at once. On Asperger's-specific points, like how and when to disclose a diagnosis, getting the most out of a support group, and becoming an effective self-advocate, he takes the difficulties head-on, neither shaming anyone involved nor letting them off the hook.

Saperstein's view is potentially transformative, its kindness remarkable coming from a member of a group struggling with 80 to 90 percent unemployment and a nearly infinite range of misunderstandings. His message of self-acceptance paired with accountability goes to the core of becoming an actual adult; the fact that he takes his own "symptoms" (like special interests and moments of flamboyantly unusual behavior) in stride and uses the reactions of others as opportunities makes him an outstanding role model for anyone living with the challenges he describes—or, indeed, for anyone with a pulse.

Without belaboring the point, he reminds us that some traits common to people with Asperger's are gifts—the knack for meticulous detail, the honesty that can seem nearly obsessive—and urges his fellow Aspies to build on these and take life head-on. In building a bridge and crafting a common language for people of all abilities, Jesse A. Saperstein challenges us all to make a better world.

Confrontation and Harmony in Bizzaro-Land