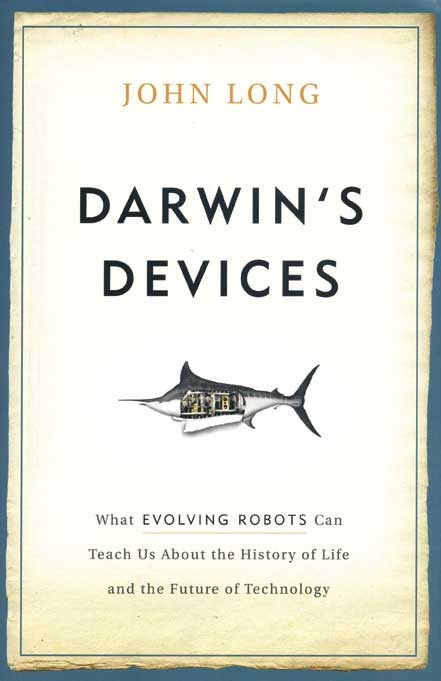 Imagine standing shoulder to shoulder with the creators of the combustible engine, the electric light, or the microchip, witnessing firsthand each historic Eureka. What a thrill to observe the successes, failures, and most of all, the indomitable curiosity of the people who pushed the boundaries of what was then known, and, with fortitude and insight, ushered the world into a New Age.

Darwin’s Devices, by John Long, professor of biology and cognitive science at Vassar, will place you as close to that process as you are likely to get (unless you are among Long’s students). The field in question is biorobotics—the intersection of engineering and biology—where scientists like Long are creating machines that can think, learn, and evolve. According to Long, we will not be seeing Philip K. Dick’s replicants or Arthur C. Clarke’s Hal 9000 anytime soon, but we are closer than you may realize.

Interestingly, Darwin’s Devices, which ultimately broadens the reader’s vista of our technological future, begins with Long’s fascination with our most distant ancestors: the first vertebrates. Unlike most researchers, Long forgoes digital models and instead uses swimming robots to divine just how ancient spineless organisms evolved into vertebrates, and how and why they mastered swimming. “Like a clumsy criminal, adaptation leaves behind many clues in the DNA and anatomy of extinct and living species,” Long writes. “But adaptation never leaves behind witnesses or surveillance tape.” In devising Tadros (tadpole robots) and Evolvobots, then introducing external pressures like predators, the need for food, and the success or failure of reproduction, Long and his cohorts set themselves up for some surprises.

When he, his students, and colleagues experience disappointment (their hypothesis is incorrect, but still interesting), Darwin’s Devices offers a candid look at the emotional investiture inherent in any scientific endeavor. Long also gives us a peek at the arduous task of applying for grants, and extols the thrills of discovery as a team effort. In these sections, he’s at his best; chatty, breezy, and jocular. And even when he delves into thickets of algorithms and waxes on in Mensa-level code, he is never far from a reference to Metallica, C. S. Lewis, or Grand Theft Auto.

In the process of devising artificial intelligence, Long muses on the actual importance of a brain, asserting that “thinking” takes place as much in the body as in the tangle of neurons in a creature’s head. Finally, in a refreshingly brisk and entertaining bit of autobiography, he writes about the connection between his work and the military industrial complex. He finds abhorrent his childhood fascination with World War II, but knows the military keeps a watchful eye on his beloved marine biorobots. Apparently, 56 countries are developing military robots. He stresses the potential benefits: “Will a robotic fish become your best friend, save your life, or overthrow an evil dictator?” he asks. “Maybe.”

Overall, Long maintains a wide-eyed optimism and tireless fascination with the mechanics of life, in all its unpredictability, messiness, and glory. If you’re interested in cutting-edge science, or eager for a behind-the-scenes look at the tireless minds who both decode our past and shape our future, fix yourself up with Darwin’s Devices.