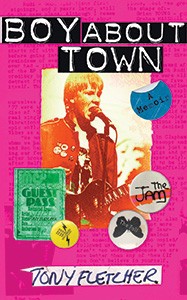 Many of us spend our adolescence rebelling against parents, sampling drugs, looking to get laid, skipping school, and listening to music that echoes our discontent. Tony Fletcher observed all of these coming-of-age rituals—but he did so in London during the mid-to-late 1970s, while writing a popular fanzine and interviewing the top bands of the era. It doesn't hurt that Fletcher is a powerful writer and a restless self-chronicler, thus making his memoir Boy About Town both a touching personal document and a propulsive historic record of England on the edge.

The Yorkshire teen (now a Mount Tremper resident) is the yearning antihero of this recollection. Short, chubby, sporting a bowl haircut, late to puberty, picked on by bullies, and the product of a broken home, Fletcher finds solace in music. After a couple of false starts buying David Cassidy and Alice Cooper records, he eventually embraces The Who. He even scores an interview with Pete Townshend for Jamming, an upstart rag that he mimeographs at school. As the magazine grows, so does Fletcher's capital on the scene, earning him chats with other musical giants.

A keen sociologist, Fletcher artfully deconstructs the era's volatile cultural landscape. The music scene was a scrum of warring factions: mods vs. punks vs. skinheads vs. rude boys, each claiming their own favorite bands, echoing the tribal mentality of British football games. Young Fletcher eschews the racist skinheads and gravitates toward the nihilistic punks. Then, The Jam arrives.

The trio—dressed like mods but singing punk anthems—becomes Fletcher's favorite band and he develops an endearing bromance with lead Paul Weller, a literate songwriter and political figure. It is a quick jump from the first Jamming interview to sitting in on recording sessions and enjoying backstage access. While Fletcher tallies each Jam gig and new LP release with breathless superlatives, he does so with an eye for detail that places the reader at every concert and in every studio. (The author has drawn from diaries, notebooks, letters, and personal interviews to bring the past alive.) The occasional dip into sycophancy, however, is offset by Fletcher's evenhanded criticism of his idols, the schoolboy growing emboldened as his zine draws plaudits. Weller becomes his role model and, eventually, business partner.

Boy About Town is a British import, so while Fletcher introduces us to fledgling legends like The Clash, Sex Pistols, Buzzcocks, Joy Division, and Gang of Four, he also gives equal exposure to famed bands that never charted big across the Atlantic: Sham 69, Cockney Rebels, Crass, Spizzenergi, and The Homosexuals. No attempt has been made to translate London life for the uninitiated; stateside readers will need a UK slang dictionary to navigate talk of bovvers, saveloys, and O levels.

Fletcher's saga careers between his personal and public lives—curiously giving short shrift to his family, but offering vivid descriptions of school life, the London indie label scene, and the inner workings of putting out a zine, as well as his own dismal track record on the dating scene. After seeing off another failed date, he muses, "What was the point, then, of having a good-looking, older girlfriend if she wouldn't even let me inside her bra?"

The book relies too much on Jamming interviews, resulting in longwinded passages that increase the page count but offer little illumination (Fletcher needs a more judicious editor). However, this indulgence never dulls the cumulative power of Boy About Town, a ripping tale of the unlikely Zelig of London `70s rock.