Book Review: Daniel Mendelsohn | An Odyssey: A Father, a Son and an Epic 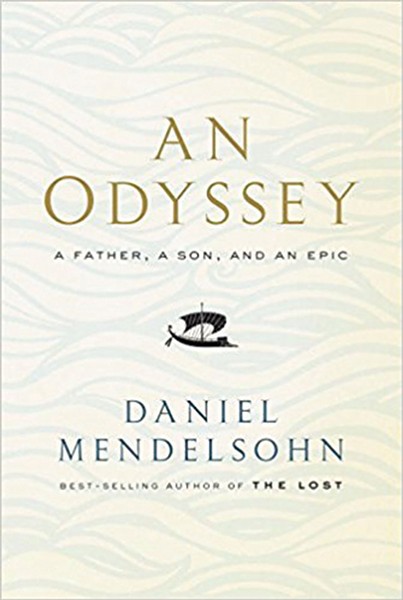 The memory of father and son circling an airport in a holding pattern starts off Daniel Mendelsohn's brilliant memoir about the winter his father sat in on "Odyssey," an undergraduate seminar Mendelsohn taught at Bard College. His father, a retired mathematician, knew quite a bit about circles, an exacting field that never appealed to his son. But "ring compositions" in Greek literature were circles Mendelsohn grew up to know a lot about. In this same chapter we learn how they operate: as a story progresses it circles back in time again and again, before circling forward again to present action. This backstory illuminates what's about to take place; a classic organization still used today and well illustrated here in Mendelsohn's own memoir.

We also learn about a father and son who don't become close until late in life, culminating in the father taking the son's class that inspires them to book passage aboard "Retracing the Odyssey," an educational cruise that follows Odyseus' actual journey from Athens to Ithaca. Upon their return the father suffers a fall and then a stroke. Mendelsohn relates all the book's events in this first chapter called a "Proem," more aptly translated as "before the song." This is the way epic poems like the "Illiad" and the "Odyssey" begin, revealing all that is about to take place before getting started. But why do it here?

The reason is, this is not just a memoir but a celebration of Homer's great poem. Throughout we learn not only the nuances and stories of the "Odyssey," but the actual structure as well, illustrated by the author placing his own story in the parameters of the Greek epic. For example, the events on the modern-day cruise (truly the heart of the book) are mirrored with Odyseus' own voyages. And in the end, when his father lays in a hospital on life support, Mendelsohn examines all the references to death and burial that surround the poem's hero.

For readers with only a high school acquaintance with the classics all of this can seem daunting, but Mendelsohn proves to be a wonderful teacher. He not only confidently leads you through the ancient text, but he breaks it up with lively students in the actual class who ask the very questions any novice would. And just when you think there's too much Greek going on, the father always shows up to steal the show, even singing American standards at the ship's piano bar.

The question is whether a highly educated classics scholar like Mendelsohn will get in the way of telling such an intimate story. But that circles back into the narrative as well. Like the Odyssey, the memoir is Mendelsohn's search for his father and everything he learns along the way. In one of the best scenes, Mendelsohn's class is enlightened by his father's comments on his own long marriage. As the students struggle to understand how Odysseus and Penelope recognize each other after so many years, the father brings up Mendelsohn's "beautiful mother," and explains how a couple manages to stay connected "long after everything else becomes unrecognizable." Now the teacher learns from the student as well.

If the "Odyssey" is about any one thing it's about stories, imagined or real, heroic or tragic, all leading to the final words left upon monuments: "the story of the life the body once lived." But this memoir is also the story of another father and son and the stories they created and told each other, like that time they just sat side by side in silence on a plane circling home, heads bent, reading.

Books & Authors Odyssey: A Father, a Son and an Epic memoir Daniel Mendelsohn