Book Review: All Hopped Up and Ready to Go: Music from the Streets of New York 1927-1977 | Books & Authors | Hudson Valley | Chronogram Magazine


If you recognize the book’s title as lyrics from The Ramones’ “Blitzkrieg Bop,” you’ve established your punk bona fides. The seminal band from Queens gets its due in this expansive and propulsive survey of a half century of musical trends that dominated New York City cultural life and, ultimately, America.

The author has shown equal ambition and whimsy with previous tomes on Keith Moon, The Clash, REM, and Echo and the Bunnymen. But to tackle such a mammoth task invites skepticism. Yet the writing is supple, adroit. So the reader willingly follows Fletcher down a thousand city side streets, into bars, ballrooms, clubs, tenements—wherever the scenes were happening.

Like Alastair Cooke’s America, All Hopped Up is an unapologetically opinionated overview of zeitgeists that sparked their own theme music. As Fletcher unveils each phenomenon, we soberly note that the music flowered in the soil of social problems: racism, poverty, right-wing politics, unemployment and, not least of all, adolescent heartbreak.

At a formidable 400-plus pages, plus notes, Fletcher’s book often overtells the story. In the hip-hop chapter, is it imperative to absorb 13 paragraphs on South Bronx urban renewal before meeting Grandmaster Flash? Nonetheless, Fletcher’s voluminous interviews uncover material often neglected. The book begins with Havana-born Mario Bauza and Chano Pozo and the birth of the mambo and rumba. This led to their work with “Dizzy” Gillespie and Charlie Parker, a symbiosis that inspired Tito Puente. Fletcher nails such instances of cultural cross-pollination.

Fletcher’s most idiosyncratic work occurs in exploring the newly-minted “East Village” from the mid-60s to the mid-70s. While overlooking a welter of popular poseurs, the author emphasizes The Lovin’ Spoonful, Velvet Underground ,and lesser-known bands-cum-social critics like The Fugs, David Peel and the Lower East Side, the Holy Modal Rounders, and The Godz.

Laurels are not bestowed sycophantically; Fletcher recognizes that trailblazers can often be rotten people. (He honors Alan Freed but bashes Dick Clark, who beat the payola scandal.) The author celebrates artistic freedom, but he dutifully explains how `60s idealism soon curdled thanks to hippie laziness and excessive drug use. Into this early-`70s wasteland, however, came a new breed: The New York Dolls, Television, Patti Smith, Blondie, Talking Heads, and CBGB mainstays The Ramones.

In his zeal for inclusion, Fletcher restores gay people to the group of DJs who crafted disco with their black and Latino counterparts. We are given a virtual tour of the crowded, sweaty dance floors of The Anvil, Paradise Garage, and Studio 54. (Fletcher has a gift for re-creating defunct spaces.)

In addition to sterling chops as a historian, Fletcher is an astute musician. When he identifies a classic song, the deconstruction is thrilling. In praising “Sh-Boom” by The Chords (later hijacked for white radio by The Crew Cuts) the author notes the “trotting rhythm track,” the “tightly honed tenor lead,” and the bass “interjection in the middle eight” crowned by “a floating sax solo.”

Both an indispensable reference book for college students and a survival guide for modern musicians, All Hopped Up makes lost worlds live again. 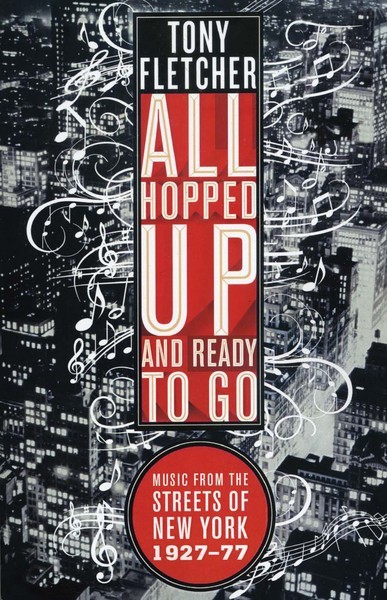