Ancient Japanese tradition comes to New Paltz with the first-ever Bon-Odori Music & Dance Festival: The Next Steps to World Peace. Obon, the Buddhist custom of remembering and reconnecting with deceased family members, is celebrated with an afternoon and evening full of dance, food, and culture. With a 360-degree stage in Hasbrouck Park, people will dance on and around the stage. The festival has martial arts demonstrations by Aikido of Kripplebush and others, as well as musical performances by Sara Milonovich & Daisycutter. Vendors include Earthgoods, Synergy Systems, falafel from Big Cheese, and Japanese noodles and sushi from Gomen-Kudasai. In addition to the food and dancing, the festival plans to promote safer and greener living as well as stopping nuclear actions. Free. August 7. Rain date, August 14. 1-9pm. New Paltz. (845) 255-8811; www.newyorkbudokai.net. 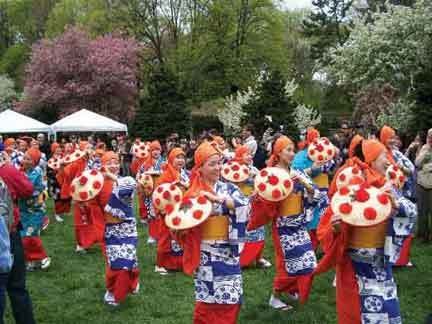