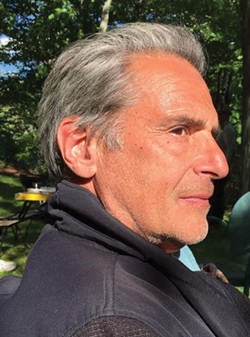 We noticed the other day that we had never finished the most recent—and I presume last—season of "House of Cards."

The reason is that it pales as drama compared to the Trump Reality Show. This is the first time I've ever chosen reality TV over scripted TV. But the sheer cliff-hanging drama of it, the surprise of the daily revelations, the incredulousness that this can be reality, makes it the best TV ever. There are all these loony characters doing outrageous things, nasty, mean, crude things, telling lies that are obviously lies, and what will ensue will definitely effect our lives. The possibilities of conventional war, nuclear conflict, wiping out meaningful health care, destroying the environment, even greater tax cuts for the rich, financial collapse, and the return of the Nazi Party are all on the table.

Trump has taken all the news out of the news, and all that's left is Trump.

Have you heard of the environmental disasters in Iraq?

There is an attempt by Syrian torture victims to indict their tormentors. They can't do it through the International Criminal Court because Syria was never a signatory. Instead, it's being pursued in Germany under the very radical concept of "pure universal jurisdiction."

Have you kept up with Qatar's conflict with Saudi Arabia, the UAE, Bahrain, and Egypt? One of the Saudi-led group's key demands is that Qatar shut down Al Jazeera, which they own. It was the first non-state-run news service in the Arabic world. The network claims that it is independent. I've worked for Al Jazeera English. In my personal experience, our independence was total. The Arabic channel brought a level of free speech unheard of in the region. US officials say it has an anti-American bias. Russian-run RT says Wikileaks documents prove Al Jazeera is pro-American. They've been banned in Saudi Arabia, Bharain, and India, had their journalists imprisoned in Egypt, shut down in Iraq, had their offices closed in Kuwait. There's no doubt that their broadcasts contributed to the Arab Spring.

It's easy to understand why this coalition of autocracies hate the idea of a free press with satellite transmission in the language of their own people. To manifest the depth of their hostility, the Saudis have released a video explaining that they have the right to shoot down Qatar Airlines passenger flights, with animation showing a fighter jet doing just that.

The democracy leaders in Hong Kong have been put in prison by the Chinese government.

Palestinians who demonstrated in England against a subsidiary of an Israeli drone maker were arrested and charged, rather peculiarly, under the Trade Union and Labour Relations laws for interfering with workers' ability to do their jobs.

Palestine, meanwhile, has sent medical supplies to Venezuela. Has the world turned inside out?

Tensions are growing between China and Vietnam. The Vietnamese were letting a subsidiary of a Spanish company drill for oil in what they call the East Sea and most of the rest of the world calls the South China Sea. China threatened force. Vietnam backed down. But that leaves them owing a lot of money. Both of them are building artificial islands. They actually went to war in 1979, with skirmishes continuing all the way to 1988. It was a draw, but you'd have to say, considering their sizes, that Vietnam won on points.

China is moving troops toward Bhutan. Bhutan has a "special relationship" with India. India has moved more of its troops up to the border. India has a 1.4 million-man army with a 2.1 million reserve. The Chinese have 2.2 million and 1.4 million in reserve. They both have nukes. Are they posturing? Or will they start shooting?

You probably did hear that Dick Gregory died. I remember him vividly. He ran for president in 1968. I voted for him. I quote him from time to time. "In the neighborhood I grew up in, mother was half a word."

Then there's: "The only good thing about the good old days is that they're gone." That's a black person's point of view. A Trumpian person's point of view is the opposite. "Race baiters and discriminators may go underground, but they never leave town." There it is: you see how everything forces us back to Trump.

There are certain things we can be absolutely sure of about Trump. The first is that he lies. The falser it is, the more adamant he is. Trump swore he was going to campaign with his own money. He swore over and over and very loudly.

The third is his compulsion to blurt. If it's in his mind, he blurts it out. One of his blurts was, "There's nothing like doing things with other people's money."

Fourth, is his panicked phobia about anything that touches on revealing a Russian connection, his adoration of Vladimir Putin, and the collection of clowns he gathered round him, many of whom he barely knew, who were connected to Russia.

Here's what the fiction writer concludes.

If he was that adamant that he was paying for it himself, it almost has to mean he wasn't.

Instead, Trump was approached by the Russians. They suggested he run for president. Plus, they said they would pay for it.

If he'd been paying for the campaign himself, he would have given himself the use of all those Trump properties as a gift or at a discount. But if he was using Russian money, then it makes sense, and it is totally in character, that he was sleazing their money from the campaign into the coffers of his own companies.

Folks, you heard it here first. It's not fake news. It's real fiction.