Blowin’ in the Wind

August 30, 2011
Last Updated: 08/07/2013 4:26 pm
comment
Photographer Carla Shapiro was teaching at Brooklyn's Pratt Institute the day the World Trade Towers came down. “I wanted to photograph it, but I wasn’t a journalist and couldn’t get a pass,” she recalls. Instead, she constructed her own memorial, hand copying more than 2,500 obituaries from the New York Times on vellumlike sheets of paper, a labor that took over five months. She then hung the nine-by-six-inch sheets from 25 clotheslines suspended across the brook behind her house in Chichester and spent a year photographing them.

More than a dozen of those photographs will be on display at the Center for Photography at Woodstock from September 10 to October 9, in a show titled “Rewriting Loss.”

The notion of recording the gradual dissolution of the hand-written script in black  ink (she used nontoxic Varsity pens) reflects Shapiro’s fascination with the passage of time and the decay: among many other subjects, the artist, who still teaches at Pratt, has photographed people of advanced age, finding beauty in their wrinkles. She shot the dense rows of vellum sheets, which as they faded resembled Tibetan prayer flags—they also suggest the transience of clothing and the human body, as well as the shapes of tombstones and the skyscrapers of Manhattan—in sunlight and rain, frost and wind. “They were frozen, snowed upon, gleaming in the light,” Shapiro says. “They were shattered and ripped.”

All of the photographs are in color, which lends a sepia richness to the close-up shots of the faded writing, which bleeds off the frame entirely, as if it were the fragments of an ancient, mysterious text, partially decoded. One’s associations with that day are ironically summoned up in images that Shapiro captured entirely from the sylvan surroundings, thanks to ambiguities of light, space, and texture she achieved from creative vantage points (some shots, for example, were taken from a ladder placed in the stream). Smoke wafting up toward the prayer flags (from a fire kindled in her streamside stone hearth) signifies the burning of the towers; an aerial view of reflections of scintillating orange sunlight beneath the suspended flags suggests the splotches of brilliant mercury light one sees flying into Kennedy Airport at night; a close-up of darkened, jagged-edged vellum, which frames a bleary, setting sun, could be of battered asphalt roof tiles, with nary a tree in sight. In another photograph, formations of erect clothes pins are stand-ins for business workers, their flesh tones the color of human skin and their metal clips echoing the lines of crisply tailored suits.

Other photographs point to grief and the transcendental: sun rays shooting from a leafy height above the rows of flags, ink collecting in thick black drops along the bottom edge of the vellum, a clump of snow that seems to be levitating in space. Subjecting the flags to the full force of the weather over four seasons was a humbling process that evoked healing, since “nature’s eternal,” Shapiro says.

The exhibit also includes a five-minute black-and-white film of the surviving flags Shapiro recently made using an 8 mm camera, accompanied by a soundtrack featuring a composition by John Adams and a layered recording of Shapiro reciting the obituaries. The film ends with a flag dropping off the line into the creek, which is instantly carried away by the rapids—an image of surprising violence, with its echo of falling bodies, yet also expressive of an immortal truth: our own inevitable fall into the currents of invisible spirit.

“Rewriting Loss” will be exhibited at the Center for Photography at Woodstock September 10 through October 9. An opening reception and artist's talk will be held on September 10 from 5 to 7pm. (845) 679-9957; www.cpw.org. 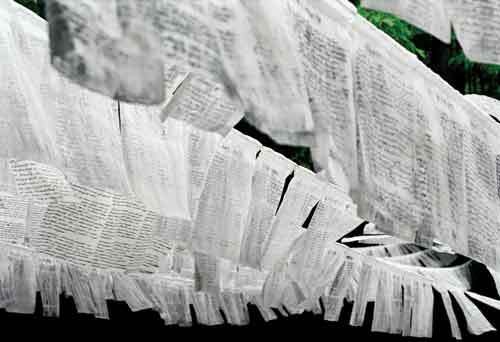