Black Artists in the Hudson Valley

The Hudson Valley has long been home to many vital Black artists in every discipline and genre from jazz to sculpture and poetry. While we have profiled many of these creatives in Chronogram over the years, we recognize that we can do much more to center and amplify the contributions of BIPOC artists in the region.

As the Black Lives Matter and racial justice movement gains traction on global scale, non-BIPOC people are recognizing that they need to move outside of their content and culture bubbles and experience a more diverse range of perspectives (#diversifyyourfeed). One of the ways to start understanding the experience of Black Americans is to watch, read, listen, and view the art and content they are creating, and to support them by following on social media, downloading albums, making a donation, buying art.

The below list is just a tiny cross section of all of the Black creatives who are making visual art, music, and literature in the Hudson Valley today.

Skip ahead to musicians, writers, or visual artists.

This list of musicians spans the genres from punk to funk to jazz, rap, and R&B. We've included embeds for each artist, and you can also hear them all in one place on this Spotify playlist. [Please excuse our (utter lack of) sequencing, we are NOT DJs.]

Rapper and singer-songwriter Young Paris was born in Paris to Congolese parents who signed to Jay-Z’s Roc Nation label in 2016.

Prolific rapper and tireless community activist Decora is the heart and soul of Newburgh. Since his time with the explosive outfit ReadNex Poetry Squad, he’s released stacks of tracks and helped to launch the multicultural street fair known as Newburgh Illuminated. We caught up with him at his favorite local barbershop in 2015.

Legendary and influential jazz drummer Jack DeJohnette is known for his years with Miles Davis, Charles Lloyd, Keith Jarrett, and others, as well as his own groups.

Experimental jazz percussionist Juma Sultan was a regular on the New York scene and performed with Jimi Hendrix at Woodstock in 1969.

Lead vocalist of the platinum-selling 1980s rock band Living Colour, which is best known for their 1988 hit “Cult of Personality.”

A giant of free jazz, saxophonist Joe McPhee has influenced musicians around the world with his fiery, hard-honking horn and startling compositions. At 80, he's still blowing fiercely today. Read our 2007 feature on the avant-garde maverick.

A giant of free jazz, Poughkeepsie saxophonist Joe McPhee has influenced musicians around the world with his fiery, hard-honking horn and startling compositions. Still blowing fiercely today at age 80, his inspirational gifts remind us fondly of our 2007 feature on the avant-garde maverick.

The alter ego of singer-songwriter Marc Anthony Thompson, Chocolate Genius, Inc. began as a New York neo-soul collective in the mid-1980s. Thompson toured with Bruce Springsteen and is the father of actress Tessa Thompson.

Hardcore punk legends guitarist Dr. Know and bassist Daryl Jenifer of Washington, DC-born band the Bad Brains have lived in Woodstock with their families for decades.

Slam Allen is an internationally renowned blues musician who was born and raised in a musical family in Sullivan County. He has performed with his band Slam Allen Live regularly plays at the Falcon in Marlboro.

Joakim Lartey is a drummer/percussionist, storyteller, educator, and sound designer. He was the cofounder, lead singer, and percussionist of Woodstock band Futu Futu.

Bassist Gail Ann Dorsey is most revered for her lengthy tenure with David Bowie, as well as her work with Lenny Kravitz, Tears for Fears, the National, Bryan Ferry, Boy George, and others.

Locally raised rapper, singer-songwriter, poet, writer, activist, and actor Saul Williams is known for his fusion of hip-hop and poetry and his roles in the film Slam and the Broadway musical “Holler If Ya Hear Me.”

Singer-songwriter and multi-instrumentalist Simi Stone leads her own popular bands and has toured and performed as a vocalist with David Byrne, the New Pornographers, and others.

Jazz vibraphonist Stefon Harris has been a sideman to Joe Henderson, Joshua Redman, Kurt Elling, Ry Cooder, Diana Krall, and others. His 1999 album Black Action Figure was nominated for a Grammy.

Rapper and songwriter Pardison Fontaine is most popular for his 2018 Top 40 single “Backin’ It Up” featuring Cardi B, along with his cowriting credits on songs by Kanye West and Beyonce.

Soulful alto and soprano saxophonist Eric Person works in the jazz, rock, funk, soul, and world music mediums. He leads his own groups and has collaborated with McCoy Tyner, Ben Harper, Bootsy Collins, many others.

Vocalist and actor Kitt Potter is the executive director of Maverick Concerts in Woodstock. She also established the Colour of Music Festival in Charleston, South Carolina, and serves a board member of the organization Calling All Poets and the Woodstock Cultural Alliance. Read the profile we did on Potter when she took over at Maverick.

Promoter Greer Smith has been presenting Poughkeepsie’s wonderful Jazz in the Valley music festival since 2000. The event includes an educational component, “Behind the Beat: Intro to Jazz,” which takes place in public school districts throughout the mid-Hudson Valley and in New York City.

Known to New York listeners for his decades with WKCR, Sharif Abdus Salaam is now the host of the weekly “Jazz in the Valley” program on Radio Kingston.

Author Lesa Cline-Ransome and her husband, illustrator James Ransome, are well known for their books focusing on civil rights. James is a multiple winner of the Coretta Scott King Award for books for young people and a 1999 NAACP Image Award for his book Let My People Go: Bible Stories Told by a Freeman of Color. Lesa won the 2017 NAACP Image Award for her Harriet Tubman biography Before She Was Married.

Novelist and playwright Wesley Brown, who teaches at Bard College at Simon’s Rock in Great Barrington, Massachusetts, is a former Black Panther who served three years in prison in the 1970s for his refusal to fight in the Vietnam War.  His 2009 novel Push Comes to Shove tells the experience-based story of a 1960s New York Black activist group.

Multidisciplinary artist Jean-Marc Superville Sovak works in sculpture, drawing, and video and is the author the award-winning graphic novels Deadly and Into the Dangerous World.

Martin Puryear is known for his large abstract sculptures, which he makes via traditional handcrafting techniques using wood, bronze, and other natural materials; his towering Bearing Witness stands beside the Environmental Protection Agency’s Ronald Reagan Building in Washington, DC. While Puryear isn't on Instagram, you can see a sampling of his work here. (His brother, Michael Puryear, is also a master furniture maker.)

A prominent presence on the Downtown New York 1980s scene, Jack Walls is an artist, poet, and writer as well as the former partner of famed photographer Robert Mapplethorpe. He exhibits his paintings and colleges in his hometown of Hudson and in Manhattan.

Jacinta Kroner works in mixed media visual art and photography. She is also a singer and appears as a performer in and local theater.

Nigerian-born multimedia artist Osi Audi is known for his geometric motifs. He has shown at galleries and museums on four continents, including the Smithsonian Institute's National Museum of African Art, the British Museum, and the Newark Museum. Locally he has shown at the Kleinert/James Center for the Arts in Woodstock and SUNY New Paltz's the Dorsky Museum.

My works being installed at the Dorsky Museum, New Paltz, as part of the show I curated titled Abstract Minded: Works by Six Contemporary African Artists, opens on January 24.

Before becoming a Kingston resident, Andrew Lyght lived in Guyana, Canada, Europe, and Brooklyn. He brings a wide range of cultural and artistic influences—not to mention materials—to his work. As the New York Times wrote in 2016, "Mr. Lyght blurs all distinctions between drawing, painting, sculpture, digital photography and installation art." While Lyght isn't on Instagram, you can see a sampling of his work here.

Orange County-based sculptor and painter Richard Outlaw's works range from landscapes to abstract portraits, with a focus on Afro-centric themes. 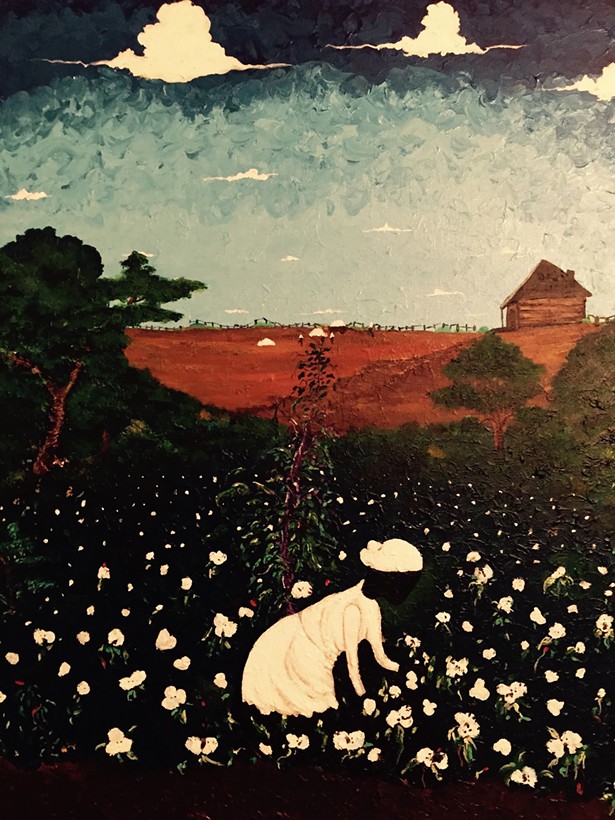