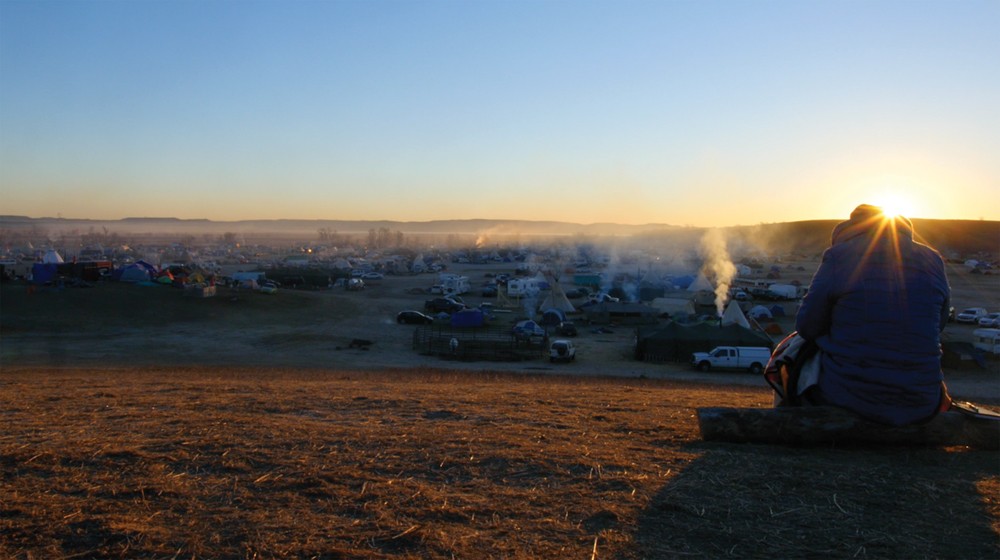 It's a piece about reincarnation and looking at the world, and life and death; it was a way to recontextualize my tribe's beliefs, which seemed so foreign and distant to me growing up, as they do to others looking in. It's about weaving something new together.

These are the words that accompany one of the videos in "Centers of Somewhere,"  a powerful solo museum exhibition of work by Sky Hopinka, a member of the Ho-Chunk Nation of Wisconsin and the Pechanga Band of Luiseño Indians. They refer to I'll Remember You as You Were, not as What You'll Become, which Hopinka describes as an elegy to Diane Burns, the late Indigenous poet who explored themes about racism and colonialism in the US. But they also aptly summarize the central themes that unite the selected works, on view at the Center for Curatorial Studies at Bard College through February 14. Curated by Lauren Cornell, director of the Graduate Program and the chief curator for CCS Bard, "Centers of Somewhere"  includes a new commissioned work filmed around the Hudson Valley and is part of a series of solo shows at Bard designed to provide emerging artists with a platform to make a significant statement about their work.

Throughout the photography and experimental films on view, the 36-year-old visual artist and filmmaker seeks to destabilize entrenched colonial perspectives of Indigenous peoples and recast descriptions of land, sky, sea, myth, place, and personhood in their own words.

Language, which Hopinka describes as a container of culture, plays a central role throughout the installation. Hopinka often subtitles his films in either English, Hočąk, or Chinuk Wawa, a nearly extinct Indigenous language that Hopinka teaches. In Jáaji Approx, ("jáaji" is a Hočąk term used to directly address a father), the artist juxtaposes audio recordings of his father, Mike Hopinka, a powwow singer, relaying personal experiences through anecdotes and song, with video footage of landscapes—mountain, sea, sky, roads—the two have traveled both together and alone. The imagery grows more abstract and begins to merge and separate, very much like the relationship between a father and son, between generations, between languages and emotional experience that can't be articulated with words. At the end of the film, Hopinka crosses a bridge and then cuts to a still-shot—the first and only static image in the film—of the artist's father sitting in the passenger seat of a car watching a sunset, capturing a poignant moment of repose and reflection at the end of a journey.

"The films are told from a personal place and a place that is fluid and looks at different linguistic systems and at the US from the perspective of its colonial history," Cornell explains. "The videos offer something new by way of a visual and sonic vocabulary."

Here you are before the trees, a newly commissioned, multichannel installation, consists of footage Hopinka shot while traveling through landscapes in the Hudson Valley, where he currently resides, and Wisconsin, where he is from. By visually connecting these different regions that contain indigenous histories, Hopinka "is very much trying to destabilize the very historical, traditional, romantic ways that the Hudson Valley has been seen by looking at landscapes anew," according to Cornell.

The experience of "Centers of Somewhere" is profound and revelatory. On the one hand there is the bucolic beauty and lyricism of the imagery, and on the other, a palpable tension and longing inherent in the words, both spoken and written, used to attempt to convey how the visualized landscapes are seen, felt and experienced by the Indigenous peoples who inhabit them.

"Centers of Somewhere" is slated to run through February 14 at CCS Bard. The museum is currently closed to the public, although the safety team reevaluates weekly. Please check the CCS Bard website to ensure the gallery is open before planning your visit.