Like many municipalities, the city of Newburgh’s history is mostly hidden within the records of town hall or in dusty volumes on the shelves of the historian’s office. But with the Urban Archive app, the city itself becomes your museum.


Using geolocation services, this interactive educational platform allows users to access a wealth of archival photos of Newburgh as they walk through the streets on a self-guided tour. The Urban Archives app acts as both a map and museum guide for the city. With the help of five local historical groups, over 148 images of the city’s rich past were compiled to offer myriad learning opportunities for residents and visitors alike.


The app includes contextual blurbs and pictures to compare the past from the present at each site. Additionally, Urban Archive offers two guided audio tours and allows you to create your own then-and-now pictures. Even when you’re miles away, you can browse historical sites and stories to plan your next visit using the to-do list feature. Relevant areas are highlighted on the map, revealing your distance from the location and the path there. You are able to check in on the app within 50 meters of the site, logging every exploration. 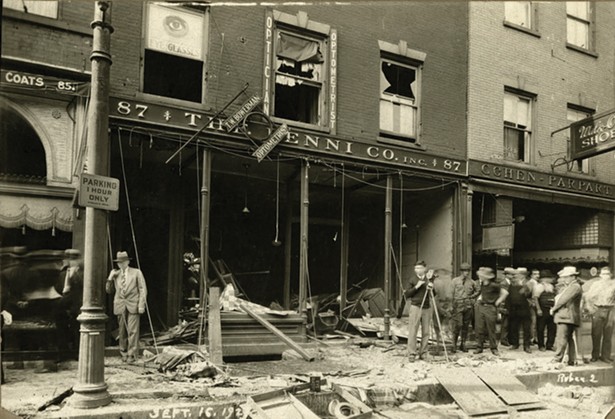 In 2016, the nonprofit Urban Archive launched in New York with a humble trio of institutional partners and a few hundred historical photographs of the city. Using the latest mobile technology, the organization’s mission is to offer new urban educational opportunities, offering a distinct window into the architecture, culture, and stories of a place. Since then, the organization expanded to obtain more than 80,000 images of the city, with over two dozen historical groups contributing. On June 1, Newburgh became the first city outside of the five boroughs to join the app’s collection.


Newburgh is the second largest historical site in New York State. Three centuries of architectural expression are etched into city’s structures. Examine the work of respected architect Frank E. Estabrook: a Newburgh native responsible for structures like the Liberty St. School, Broadway School, and Quassaick Bank. Or for a tour with a religious slant,visit the AME Zion Church, which Frederick Douglass passed through in 1870, or the crumbling Dutch Reformed Church- an 1835 Greek-revival church listed on the World Monuments Fund's list of the "100 Most Endangered Sites".


Historical groups that contributed to the Urban Archives database include City of Newburgh Heritage Center, Historical Society of Newburgh Bay and the Highlands, The Newburgh Free Library, The Southeastern NY Library Resources Council and The Department of Small Interventions. Urban Archive is open to additional submissions from groups whose content can enrich the educational experience.

The original print version of this article was titled:
"Big Idea: Urban Archive expands to Newburgh"