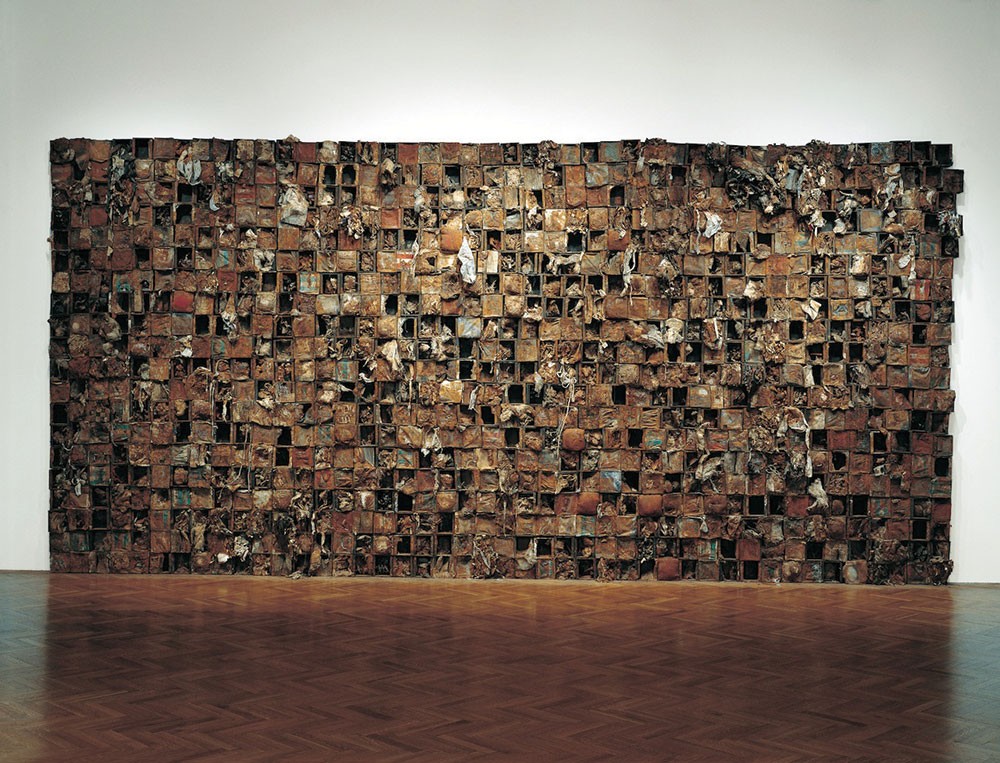 Art generally connects people between boundaries," remarks Livia Straus, director of the Hudson Valley Center for Contemporary Art (HVCCA) in Peekskill. That is the theme of the show "Between I & Thou," which opens at the center February 4. Artists from 11 countries are represented: Israel, Spain, Mexico, Iceland, Argentina, Russia, Australia, South Korea, England, the Netherlands—plus the US. In all, 38 artists will participate.

The current artist-in-residence at the center, Remy Jungerman, was raised in Suriname but now lives in Amsterdam. An initiate into the Winti religion, Jungerman combines tribal religious motifs with the cool geometric abstraction of Mondrian. Many of his works include kaolin, a white clay used in Winti practices to mystically protect the celebrants.

Who's Afraid of Aunt Jemima? by Faith Ringgold is her first "story quilt," created in 1983. It includes an extensive text presented in squares, alternating with portraits of the story's characters. It is the only one of her quilts Ringgold made entirely by hand. The artist wrote the story herself, in a Southern dialect, daring to confront the demeaning stereotype of Aunt Jemima, which emerged from 19th-century minstrel shows to become an iconic symbol of pancake mix in 1888.

Leonardo Drew finds materials like wood, rusted iron, paper, and cotton, burns them, oxidizes them, then places them in little boxes—Straus calls them "memory boxes"—that he gathers into installations. Number 43, the piece in this show, looks like a wonderfully chaotic homemade mailroom. Barbara Korman is represented by Looking at Woods, a sculpture composed of stripped-down tree branches resembling both unkempt hair and metal spikes.

Judith Zabar offers mischievous, bright, spontaneous drawings with lighter-than-air children, milk bottles, tenements, and large grinning dogs, all in the colors of the Sunday comics. Her husband Stanley is a co-owner of Zabar's. These pieces began as doodles Judith made while speaking on the phone.

Drawing 8 (1988-90) by Icelandic artist Christian Guomundsson is not a drawing at all but two large blank paper rolls backed by graphite panels. The installation looks like a wordless Jewish Torah scroll: a scripture written in invisible ink. In Katherine Mangiardi's video, Tracings, the artist etches delicate symmetric designs on ice while ice-skating. (Mangiardi works as a skating coach.) Laura Battle is represented by Crossing (2007), an obsessive linear pencil drawing on gray paper that invokes a deep, illusionistic space—like a rectangular hole designed by electrical engineers.

Within the exhibit will be small solo shows, which Straus calls "pods." A pod will remain open two or three months, then be replaced by another minishow, giving the space an organic quality, like a meadow where wildflowers take turns blooming.

Roughly 10 of the artists in "Between I and Thou" are in their 80s, including Ringgold, Zabar, and Guomundsson. Known for taking a chance on young, new, provocative artists, the HVCCA also encourages older artists—who in some ways are similar to youths. An artist in her 80s no longer has anything to prove. She can be free, honest, whimsical, silly—or disturbingly profound.

The title of the show refers to Martin Buber's philosophical classic I and Thou, which suggests that the highest human state is one of dialogue. Contemporary art is, indeed, a conversation, employing the techniques of the last hundred years—Cubism, abstraction, Dada, Minimalism, Pop art—to convey complex ideas. A painting may whisper or shout, but a roomful of artworks never argue.