Although Close, Each Town Has Something Different to Offer

If Saugerties and Woodstock were best friends in a Hollywood movie, Saugerties would be the workaholic who spends the evenings and weekends making furniture, while Woodstock would be the wood sprite, always dancing around to music only it can hear and wearing Stevie Nicks shawls. Or so it would appear on the surface. In fact, both Ulster County towns are a complex wash of history, arts, music, and culture, with old-fashioned country sensibilities rubbing elbows with hipsters and millennials as their popularity as destinations continues to grow. 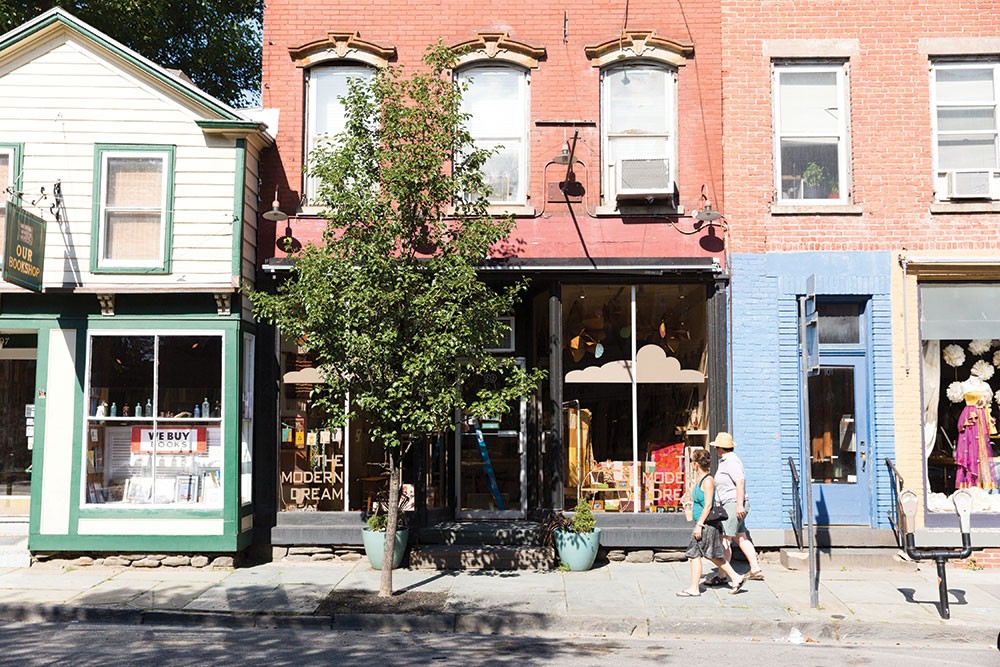 Saugerties was once a mill town, steeped in labor, industry, and the business opportunities that access to both the Hudson River and the Esopus Creek had to offer, owed in part to a lot of lucrative bluestone. Woodstock had its own industries like glassmaking and leather tanning, and eventually evolved into a resort/vacation town. Byrdcliffe Art Colony established itself in 1902, but artists were in Woodstock long before that, feasting sumptuously from the boundless inspiration bubbling forth from the Catskill Mountains and Hudson River Valley that lie at Woodstock's doorstep.

In a sense, the arts had Saugerties surrounded, from Palenville in Greene County to Woodstock eight miles to the west, so it's no shock that Saugerties boasts its own art community, which is apparent during the spring and summer, when the village sidewalks are populated with artistic interpretations of horses, chairs, or lighthouses, each piece auctioned off in the fall by the town's chamber of commerce.

During any season, however, Saugerties's affinity for hard work and creative pursuits is painted across the community. "The Village of Saugerties is wonderful, with so many eclectic and new shops and restaurants," explains Marjorie Block, the chairperson of tourism for the Town of Saugerties. "Many of them are owned by young people who have found Saugerties to be a great place to start a business." 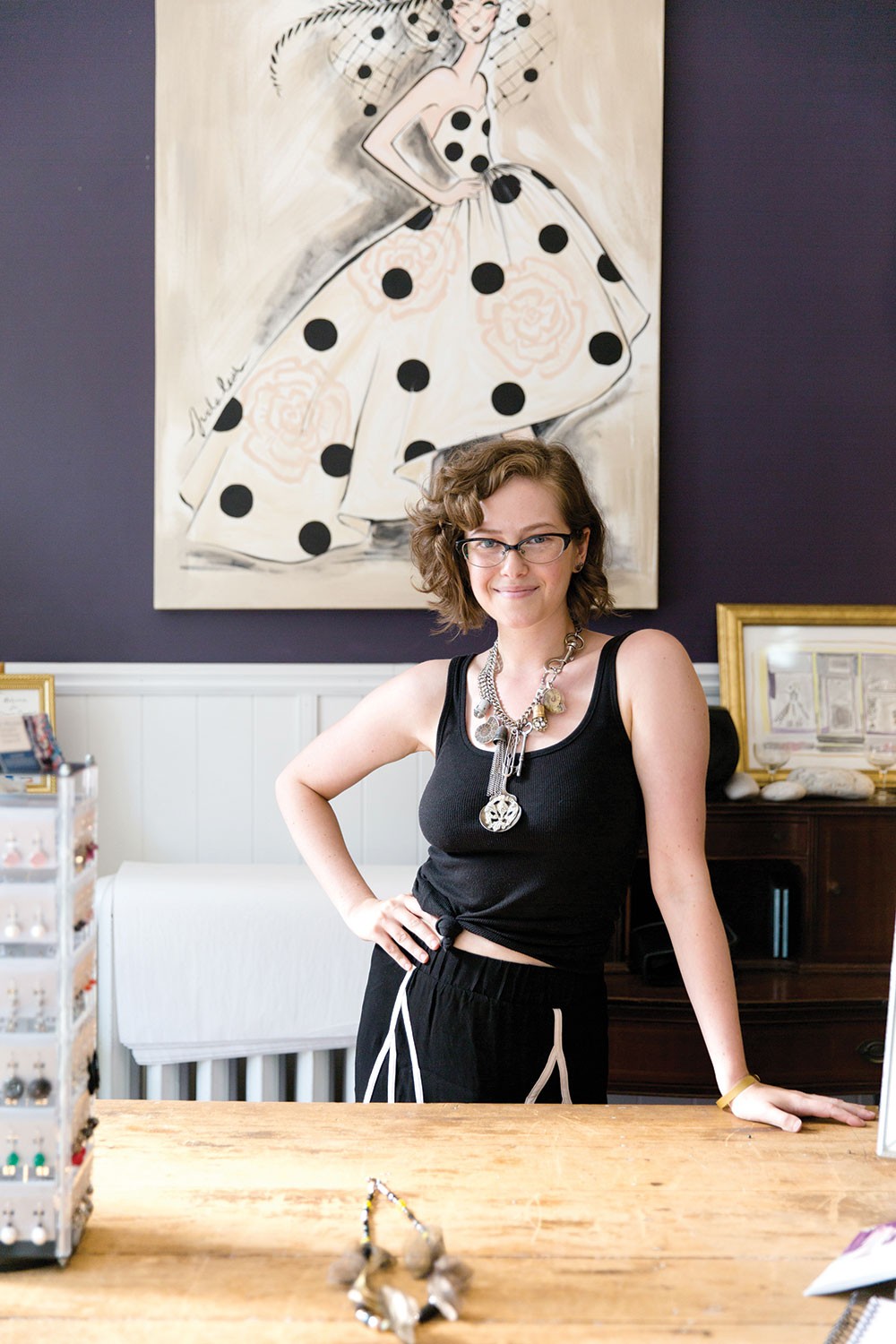 While she acknowledges the connection between Saugerties and Woodstock, Block also stresses that Saugerties is its own place. "We have been considered 'Woodstock's little brother,'" says Block. "But I don't think that's a correct interpretation. Saugerties is very diverse. We have the arts, but also a strong sports presence. I believe also, because of the size of the community as well as our location, we have a strong business and manufacturing background."

While new retail ventures might be skewing young in Saugerties, the town has a healthy appreciation for the past. The Saugerties Antiques Center on Main Street, for example, with its storefront windows, offers a tantalizing peek at the good stuff inside, like funky vintage clothing, old postcards, and handmade items from local artisans. Likewise, vintage clothing store the Pink Chandelier, located on Partition Street, is part of Saugerties's cadre of vintage and couture boutiques, which also includes Juda Leah Atelier & Boutique, Capsule Collection, and the Well. The vintage lovefest continues at Rock Star Rodeo, also on Partition Street, where the sign on the front door reads, "You Don't Need Anything in This Store." Oh, but you do need a pair of vintage cowboy boots (of course) and some gifts of the "wacky" variety—you just didn't know it. The Orpheum Theater, on Main Street, is a retro attraction too, since it used to be a vaudeville theater. These days, the movie house plays first-run films and Woodstock Film Festival entries during the fall. Best of all: It's cheaper than the theater at the Hudson Valley Mall.

Saugerties expresses itself through food as well, from fine dining to standard takeout. Slices Pizza is a clear favorite among many pizza options, thanks to offerings like the authentic Grandma Sicilian, caprese, and vegan and salad pies. Across the street, on the corner of Partition and Main, Rock Da Casbah (formerly Rock Da Pasta in New Paltz) is renowned for its pasta-packed menu; vegan, vegetarian, and gluten-free options; and rock 'n' roll-themed ambiance apparent in both its decor and menu ("Fleetwood Mac & Cheese"; the joke was there all along), plus frequent live music.

Further down Partition, there's 'Cue, the country cousin to Miss Lucy's Kitchen. 'Cue is all about casual, backyard-style dining complete with half racks of ribs served on paper plates, outdoor seating at picnic tables, live music, and Miss Lucy's Kitchen's famous desserts served in mason jars. Out of the village, over in Malden, a Hudson River-side hamlet in the town of Saugerties, Annarella Ristorante serves up Tuscan-influenced dishes like jumbo shrimp prepared with cannellini beans, tomato, and sage.

While Shakti Yoga used to be the only yoga game in town, the new Saugerties Hot Yoga begs you to break a sweat seven days a week in a 100-degree studio with hot vinyasa, Bikram-style, and community classes open to every level. There are less sweaty ways to unwind, of course. Perfect Blend Yarn and Tea on Market Street offers unwinding in both the literal and the figurative sense, since it stocks an array of yarns, needles, and knitting accessories. Bring your knitting project to the next knitalong, take a class, or drop in for some knitting help on Saturday mornings, all while sipping tea.

The Catskill Mountain view that inspired an artist movement lives right in the village in a place called Seamon Park, one of the best places in town to catch both a deep breath and a glimpse as you take in the views. Down by the creek, where the 18th-century grist mill once sat, a crumbling replica that was built in the 1970s remains, harkening back to Saugerties's mill-town roots. Seamon Park also hosts the town's annual Mum Festival, which sees the site festooned with hundreds of chrysanthemum blooms.

The Hudson Valley Garlic Festival is the granddaddy of Saugerties festivals and happens every early fall at Cantine Veterans Memorial Complex (known simply by locals as Cantine Field). For two days, food vendors offer their culinary interpretations of the delectable "stinking rose." While HITS (Horse Shows in the Sun) equestrian center isn't a festival, it maintains a festival atmosphere by hosting eight weeks of horse shows and competitions from May through mid-September, all open to the public and hugely popular among kids dreaming of ponies.

There's plenty more for kids too, even if they're not digging the Little League scene at Cantine Field. The Boys and Girls Club of Saugerties is also geared toward keeping kids constructively busy with programs (including an afterschool program) throughout the year for young children and teens. Membership is $10 per year. Heading west on Route 212, away from the Village of Saugerties and toward Woodstock, is the Paul Green Rock Academy, which teaches the fine art of rocking to kids aged 8 to 18; they can choose between guitar, bass, drums, keyboard, and voice lessons and participate in performances year-round. Adults can get in on the fun too, at the PGRA Adult Program, which has its own rehearsals and performances.

The Paul Green Rock Academy recently acquired the former Zena Elementary School in Woodstock and has converted it into the Woodstock Music Lab, and will be expanding its programs there to focus on the studio engineering and business sides of the music field. Long time Woodstock resident Lari Lang is the facilities manager for the music lab, and she's familiar with the bond that the Saugerties and Woodstock communities share. "I think both villages are similar," says Lang, referring to the boutique stores and storefronts in both villages, which she calls "quite cute and interesting." Lang believes that Woodstock could stand to use some more of the live-music spirit the town is identified with, especially after dark. "We are the coolest small town on earth. I'd truly love to have more nightlife back here." 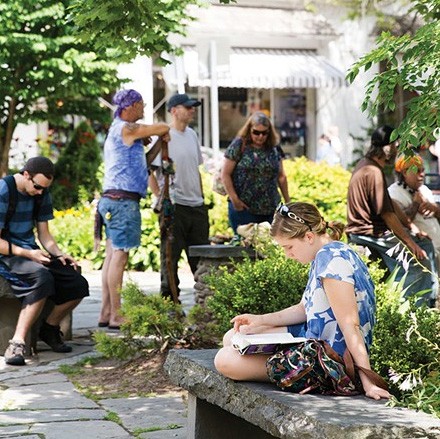 There is nightlife in Woodstock, but you might have to head to the hamlet of Bearsville to find it. The tiny 'burg, just outside of the village proper, is bursting with food, drink, music, and good times. The entertainment complex there includes the Bearsville Theater for live music, the Bear Café for fine creekside dining, the Little Bear Chinese restaurant, and the newest addition, the Commune Saloon, which is complete with outdoor seating around a fire pit. The nearby Cub Market fits into the Bearsville scheme and is a solid pit stop for specialty groceries, baked goods, and deli fare. 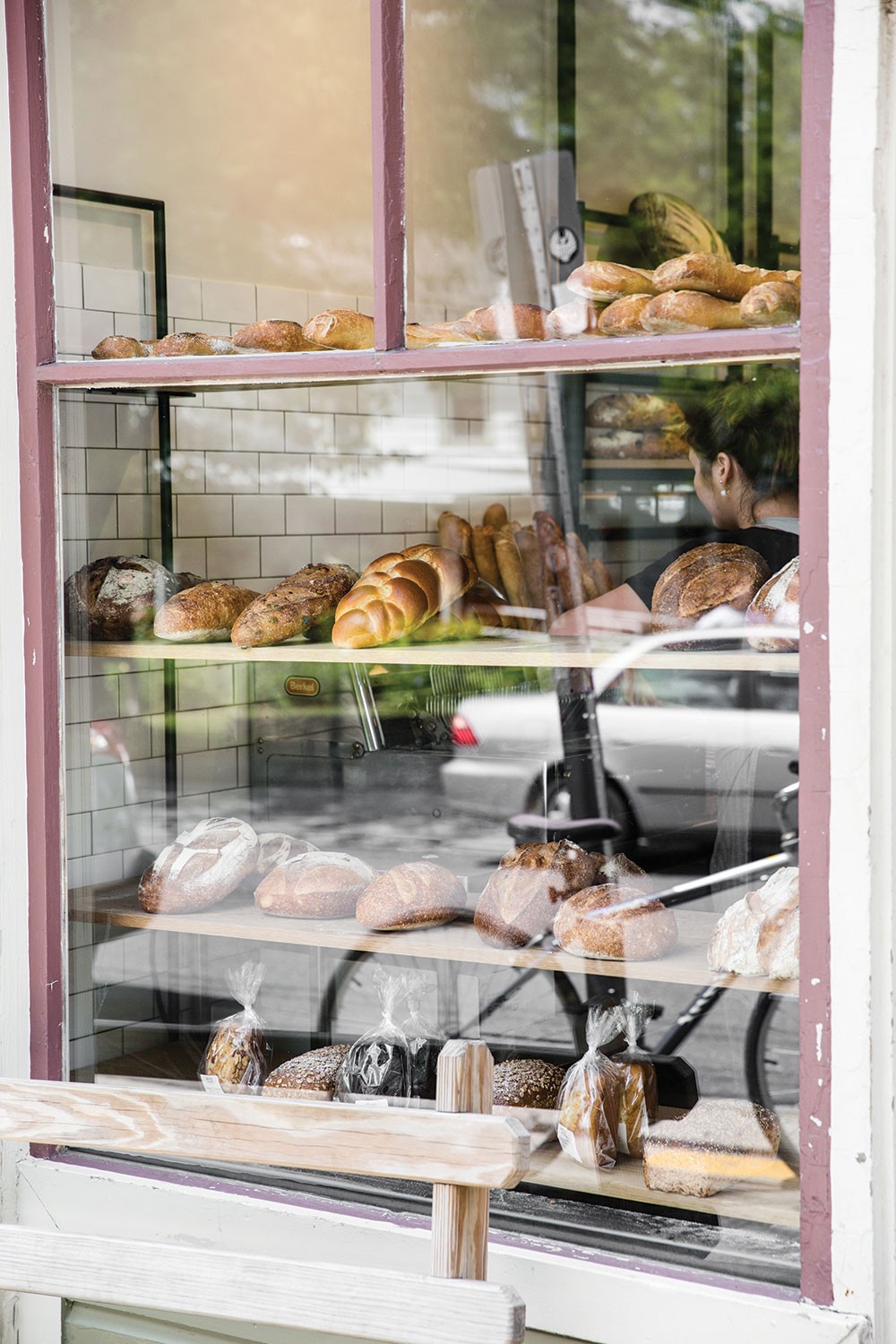 Also outside of the Village of Woodstock is Maverick Concerts, which presents live classical music and jazz in a one-of-a-kind Arts and Crafts-era wooden concert shed, which was hand made in 1910 by a group of workers supervised by founding artist Hervey White. Woodstock Sessions is keen on presenting a new setting for musical performances by bringing audiences into the recording studio to watch live sessions unfold before their eyes and ears; it wouldn't be surprising to learn that the Woodstock Music Shop, on Rock City Road, supplies many of the musicians who appear at Woodstock Sessions with the very instruments they play. Woodstock Playhouse, on Mill Hill Road, its green, hexagonal façade immediately recognizable upon entering the village, also enriches Woodstock's musical vein with concerts, but live theater is its true bread and butter. 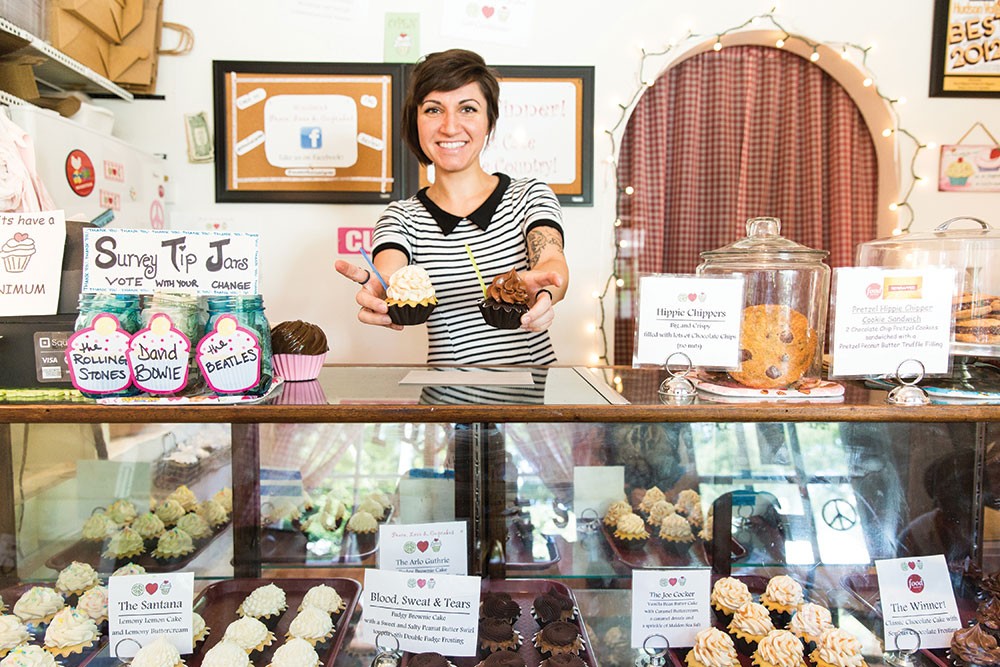 Woodstock wouldn't be Woodstock without a health food market, and Sunflower Natural Foods fills the bill, with organics and all-natural items. It's important, however, to balance out all that healthiness with a little sin, as is the Woodstock way. Peace Love & Cupcakes, on Tinker Street, can help you wreck your diet with a Tie-Dye cupcake or a Pretzel Hippie Chipper Sandwich (the owner, Janice Hargrove-Kollar, was a finalist in the Pillsbury Bake-Off and won the Food Network's 2008 title of Best Cake in the Country). Yum Yum Noodle Bar, on the bustling corner of Rock City Road and Tinker Street, bridges the healthy and the decadent, with signature noodle bowls bursting with veggies followed up by desserts like Vietnamese coffee tart and passionfruit coconut pudding. 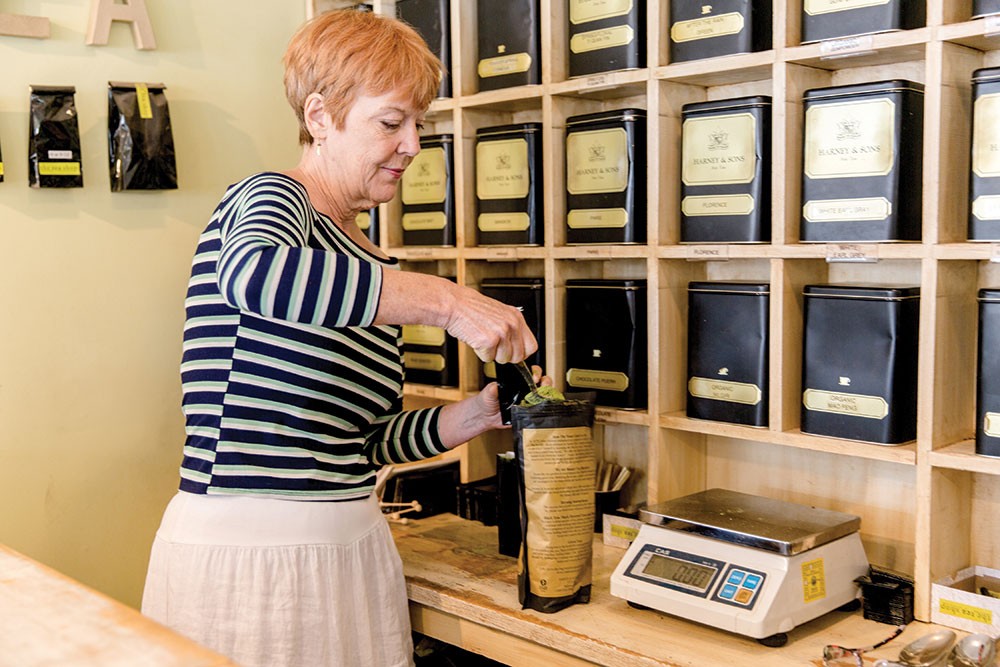 Woodstock is Boutique Heaven, much like its BFF, Saugerties. Shops like Pondicherry, on the Woodstock Green, is a quintessential Woodstock experience complete with diaphanous dresses, incense, and statuettes of Ganesh. Across Tinker Street from Pondicherry is Woodstock's renowned indie bookstore, the Golden Notebook, which has an upstairs space devoted to readings and occasional live music. Ultimately, however, Woodstock is about its art-colony roots and its thriving visual arts community, whose work is on display at the Woodstock Artists Association and Museum (WAAM) gallery, located on Tinker Street. The art of moviemaking is celebrated every day, and during October's Woodstock Film Festival, at Woodstock's indie movie theater, Upstate Films (its counterpart is located in Rhinebeck). The Woodstock Comedy Festival, poised to enter its fourth year, showcases the comedic arts and awards its "New Faces of Comedy" titles every year.

Woodstock sits snuggled up next to Overlook Mountain, which is lush and green in the warmer months and transformed into Narnia during the winter. Like Saugerties's Seamon Park, Woodstock has its own spot known for art-inspiring scenery, the Comeau Property, a 77-acre public space right in the middle of the village. A trail wends its way along the Sawkill Creek, providing something hard to find outside of vibrant places like Saugerties and Woodstock: a modicum of silence. 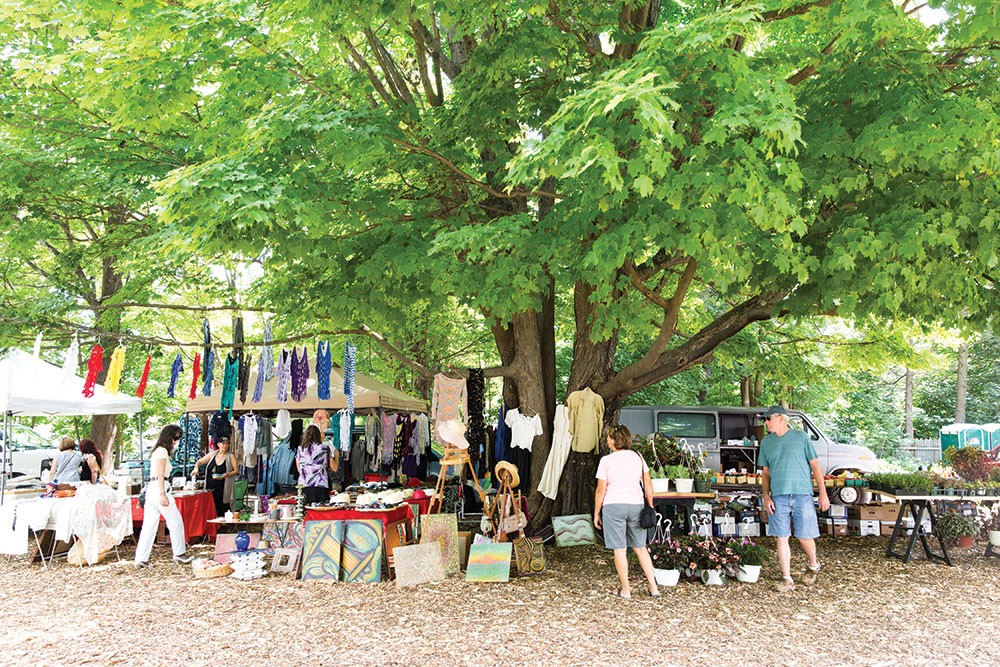