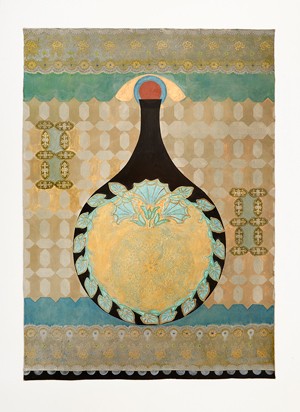 Chatham, New York ripples with hills, and across the Hudson River, the old Catskill Mountains are always blue with distance and frothy with deciduous forest. Benigna Chilla arrives outside the gallery on Chatham’s Main Street on a sunny day in July, but she isn’t concerned about weather. No matter if it is mid-summer or the deepest January day, she dons bright red sneakers with a long black sweater and black capri pants. Despite the monotone color, the wool of the sweater is lightly cabled, and her pants are a sophisticated soft jersey fabric. Everything about the ensemble is both pristine and comfortable. With the ancillary grace of functionality, her style exudes usefulness the way a raven’s feathers are beautiful.

Chilla’s show at Thompson Giroux Gallery in Chatham “From West to East to West” will run through the end of July, and connects a collection of her early works from the 1960’s to her most recent pieces, mostly in the form of large scale wall hangings completed between 2016 and 2020. Chilla is internationally renowned, her artwork and teaching practice has brought her all over the world, to residencies which include Yaddo and the Djerassi Program, always specializing in the intersections between math, design, and architecture. Despite her past practices, the ties linking this show weave a different story. The gallery is warm with color. Chilla induces a mix tone, texture, and geometric mazes in balancing acts of color, shadow and shape within the gallery space. But the most thrilling thing about these pieces is that they feel alive. And I’m sure that if they spoke, not one of them would care in the least to discuss the weather or fickle waves of trends, because in another way they are dead.

Chilla’s early work featured in the gallery are pastel drawings of organic shapes in states of rot or disintegration. Loping heads like galactic formations, or roe, are bunched up together in glob shapes all brazen in color. Wings torn, bodies decaying, she drew “in aquariums,” she says, “and zoos, outside, picking up dead animals and really liking the way they were deteriorating and their wings were just completely busted. But they take on a kind of life,” Chilla adds. Even though these are preliminary sketches, they predict bold environments of the visceral life present within decay. 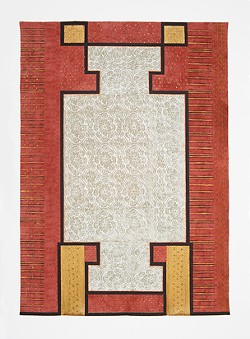 The walls are draped with painting nearly eight feet in height. Chilla begins by talking about the way it feels to make an artwork so large “it’s very physical.” She asserts that the meditative process of her paintings is the most important, and the finished piece is only a byproduct. Chilla describes standing on a staw textile, gesso between her toes, printmaking on fabric requires the weight of a whole body. She stood on ladders to paint, letting the work surround her. Fragments of Past Time is constructed around a piece of rectangular fabric from Indonesia. Like many of the paintings, this is a geometric meditation growing from a single prominently placed textile. Her multilayered canvases are either imprinted or gessoed with intentionally chosen fabrics. Chilla allows herself to find these fragments in her everyday life from which to build her canvases. Fragments, like so many of the others, shimmers with pigments she makes and mixes herself with spices and metallic paints. In Fragments of Past Time the bronze she meant to hide the ripped fabric oxidized, producing an eerie turquoise glow, like it's beneath a pool of clear water. Chilla calls these accidents gifts as she allows the textile to dictate the finished form.

Many of the paintings have no backs or frames, their raw edges visible against the gallery wall. Chilla paints on canvas and linen, thumb tacking them to the wall as she works. They are regal, large as doors. She refers to her practice as reaching into a well-known vocabulary that, like language, is assembled and reassembled, morphing slightly as she goes. Here in the gallery, the paintings have had no prep, merely unrolled and justified against the wall. Rather than any frayed edge surrendering the artist’s hand to what might appear unfinished, their grandeur and masterful craft display Chilla’s capabilities as an artist. Chilla was trained in Bauhaus art and learned everything from sculpture to printmaking, photography, typeset, and painting in Berlin.

The vivid paintings are works Chilla created after teaching contemporary art at VAST (Voluntary Artists Studio) in Thimpu, Bhutan in 2012. During her time in Bhutan, Chilla was inspired by the dzongs, geombas, temples, and home spaces, where, in addition to the bright colors, the artworks were often moved and touched. Indeed it may be recreated if destroyed, and so they hold a function beyond what a single piece physically is. Art and space moving together to create meaning.

The wall hangings are a departure from Chilla’s previous practice. For many years she layered painted screens with space between them. These works induce ecstatic eye experiences - absolute bewilderment if ambulated for long enough as they appear to spin, gyrate and whirr. But as far as they warp the vision, they do not transport the viewer. Chilla’s recent paintings are portals of color, doors with bold faces. “A lot of times I couldn’t tell you how I did this [sic], I don’t remember,” Chilla insists. But yet she continues, forming these canvases with consistency since 2012 like a song stuck in her head. Again, and again, the materials reveal themselves and she returns to her studio. She answers her own hypothetical question when she says that they develop intuitively, “like writing poetry.”

“These pieces are not fragile.” She holds Homage to Pulau Asei in her hand, lifting it up, like a mother, not afraid of any part of it. Up close, the layered textures impressed by lace make the artwork look like scales or skin. She scratches lint off of massive hexagons, as if trimming a dead leaf from a plant.

Chilla lives one half of her year in Chatham and the other in Kolkata, India, generally traveling throughout Asia and Europe where she has spent a large amount of time teaching. She has taught at Brown, Cornell, Berkshire Community College, RISD, the National Institute of Fashion Technology in Kolkata, India, and more. Through her experiences within this time she meets people, materials get passed, like they do with us all. Sometimes she discovers papers, or fabrics, loose stamps, after years. She welcomes them and they embrace the canvas, which becomes a vessel in reawakening the past.

Monks in Buddhist temples are commissioned to repaint the wall hangings if they are overused, if they are touched, if the space is flooded or mildewed. They are trained to take themselves out of the act of painting and so creating the exact image of what was there before. Here, Chilla collaborates. She points to a blue lace lily embedded within “From West to East to West.” Her grandmother made it. The silver fragments are made of a friend’s wedding sari. Wedding saris are intimate creations, unique to the day and the woman for which they are intended. The sari was left with Benigna. After many years, and a divorce, the sari began to tear. She found this textile again and the sari and the lace began to, together, dictate the painting. What comes out is what she calls an ‘environment.’

As she moves through the gallery, gazing at each work, she tells stories about each piece and the place begins to breathe, voices of women who made these textiles permeate the room. Letters and Recipes are a bundle of 2019 and 2020 collages formed with her mother’s writings and recipes. They are woven together so the handwriting on the thin paper shows through, on one side strong, and the other dimly, like an echo. Her mother never left the opposite side of a paper blank. “Nothing was wasted,” Chilla says.

William Faulkner famously said “the past is never dead. It’s not even past.” The past lives within these paintings, but they are far from dead. They are not even near memory, as in memorials. In the same way ceremony has a way of holding place and time, place isonly ever a matter of relationality. Chilla’s paintings are more like meetings, active and alive as they repeat an encounter as place. The wall hangings uphold these worn and forgotten fragments Benigna has unearthed, allowing the viewer to see them dance with their own inherent grace, honor their life specifically because it wears. Placed upon the wall and it is ordained: a constant sanctification of the relationship from which it was produced.

Chilla brings me to her studio tucked in a lush green hill on the way out of town. Among her latest in progress and most recent work is a piece inspired by a knitted checkered blanket. It’s brightly colored with no pattern at all, it was three dollars at a discount store. It looks up from the floor like an ugly pug, too cute to detest. The painting from which the blanket sprung looks like an optical illusion, as my eyes attempt to capture the multicolored checkers constantly escaping my gaze. She says she would rather go to a craft museum than a fine art museum. The embodiment of the object is so important to her. At this age, Chilla’s body has different needs than it has in the past. But she continues to embrace this mode of making. She sits on a stool to assemble the horizon of an in-progress saffron pigmented canvas, where a rug unfurls like an old game in the hills. The old hills nearby, in which Rip Van Winkle played nine pins as the sun turns those ancient blue mountains golden.