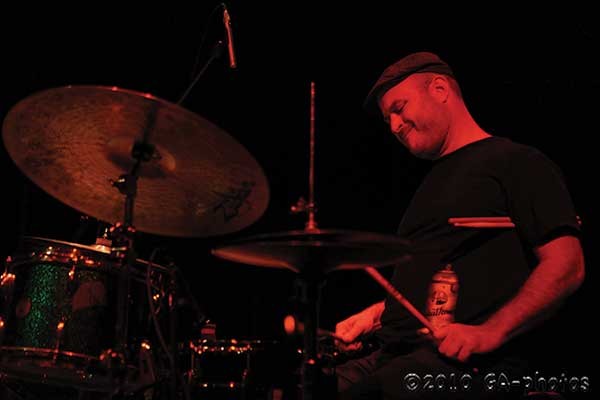 There's a unique dynamic that only exists between configurations of three highly attuned improvising musicians. Each such grouping is an equally proportioned triad with a rare contrapuntal chemistry displayed when two of the members telepathically lay down the playing field while the third takes center stage—before passing the limelight to one of his or her collaborators. Jazz history is marked by several inspiring instances: The trios of Benny Goodman, Nat King Cole, Bill Evans, Jimmy Giuffre, Oscar Peterson, and Tony Williams come to mind. And now drummer Ben Perowsky is adding to the trio tradition, via the two threesomes he will perform with at BSP Lounge on April 11.

"Having that three-way communication is definitely a cool thing," says Perowsky, a sometime Woodstock-area resident who that night will play in both the Ben Perowsky Trio and Trio Iffy. "I like playing with bands of all different sizes, but I guess what I like most about playing in trios is that you have a lot more space to work with. Unless, of course, you're working with guys who just play tons of notes." Titled "Renuions, Pt. II," the program is being billed as "the second part of a series curated to revisit and reunite groups that have had major impact over the last 20 years in the New York City music world, and that coincidentally have had the same drummer. A good excuse to catch up with old friends and dust off relationships and sheet music, with a forward-bending ear."

The Ben Perowsky Trio, which hasn't performed in public in over 10 years, is comprised of the percussionist and leader, saxophonist and clarinetist Chris Speed, and bassist Scott Colley. Beginning in the mid 1990s, the band held down a popular weekly residency at creative music temple the Knitting Factory, and, strangely, later saw one of its tunes used in a memorable scene of the 2006 Will Farrell comedy Talladega Nights: The Ballad of Ricky Bobby. In addition to performing Perowsky's originals, the group is known for its inventive interpretations of such disparate sources as Charlie Parker, Björk, Pink Floyd, Duke Ellington, and Led Zeppelin.

Chris Speed's Trio Iffy (formerly the Chris Speed Trio), besides also featuring Speed and Perowksy, includes Hudson Valley resident Jamie Saft on organ and synthesizer. Hailing from Seattle, Speed has been a key player on the downtown New York and Brooklyn avant-garde scenes for more than two decades, most famously working with Tim Berne's Bloodcount and the Dave Douglas Sextet. "Speed and company kick proverbial ass as they paint sonic graffiti on the walls of established musical styles," according to jazz bible Cadence. "If there's a hot lounge in sci-fi land, then [Trio Iffy] should get the gig. It's an exciting group with a fresh vision that begs you to hop on for a ride."

All right, then. Your ride arrives in Kingston this month.

Ben Perowsky Residency at the Falcon