The first of May is a time of general debauchery—at least at the Center for Symbolic Studies in Rosendale. Since being reawakened in the Hudson Valley 20 years ago, Beltane has slowly amassed more than a thousand people each year to the grounds of Stone Mountain Farm. Originally celebrated by Western European Celts, in Gaelic Beltane bears the loose meaning “brilliant fire.” The celebration’s meant to awaken the sleeping coals of a dreary winter, so we can revel in the youth of spring.

Opened in 1990 as a nonprofit performing arts and healing center, the Center for Symbolic Studies’ programs focus on interconnectedness and environmental awareness, and the resulting creative expression. On May first its fields burst to life—welcome to Beltane.

The Center interweaves traditions from different cultures into the festivities. This year there will be a variety of traditional African performances. Fode Sissoko is an acknowledged drum master from one of the most eminent musical families in West Africa as well as the founder of Fakoli Dance and Drum, an educational organization. Throughout the day music is performed adding an energetic, communal vibe. There’s even an eight-horse dance in a stone circle.

The festival is a smorgasbord. Anne McClellan, an organizer of the event, explains it as “a hodgepodge of different cultures. It’s just impossible to be bored there.” While larger than life puppetry stroll the grounds, horses meander the crowds like royalty, adorned with the horns of unicorns. The crowd, many dressed in medieval costume, feast on local food. Little kids spend the day frolicking with painted faces. With warm spring rays finally settling on the skin, picnics are set out and enjoyed next to a game of Frisbee. Guests are also welcomed to traverse the hiking trails around the property or watch a round of sword fighting.

Then there’s the Maypoles. Traditionally, branches from a tree were lopped off and the tree wrapped with violets in representation of Attis, the Roman god of death and resurrection. This symbol of Beltane stands erect in the field. There are two Maypole dances, one for kids and another adult dance—with approximately 50 dancers elaborately weaving ribbons around the pole. Anything to wake up spring.

But what’s better to chase away the crusties of winter sleep than a 30-foot long dragon? After Beltane’s parade around the grounds a performance features the Beltane hero—the summer dragon. The King and Queen, masquerading any other day as two little kids, must go on a quest to help the dragon chase away “old man winter” so summer can begin. When the sun finally starts setting, the two Beltane bonfires are stoked. They rise into the air and warm the spring night. For the remainder of the festival the fires blaze amongst dancing and music.

There is rustic camping available if you want to stay overnight, and a free shuttle available to the festival from downtown Rosendale. Parking on site is available for a fee. Beltane will be celebrated at the Center for Symbolic Studies at the Stone Mountain Farm in Rosendale. The gates will be open from 1pm-12am on May 1. (845) 658-8540; www.symbolicstudies.org. 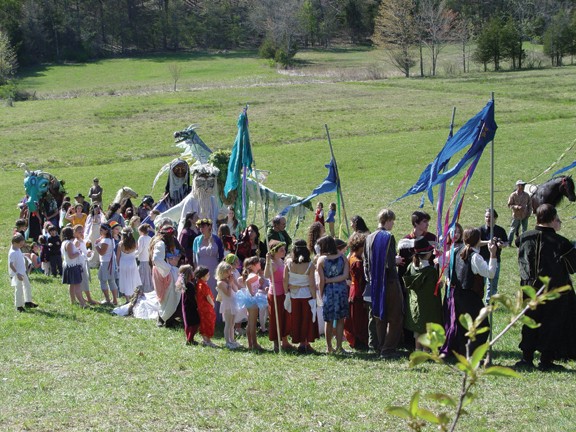