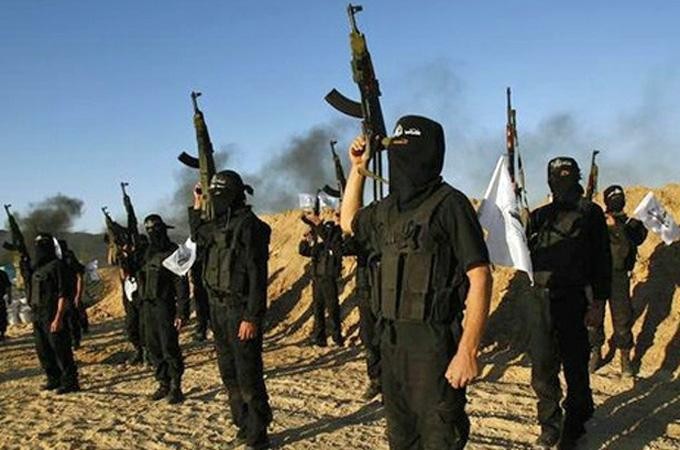 French President Francois Hollande has declared war on ISIL. Republicans are appalled, shocked, chagrined, that a French president is more bellicose than the American president.

Putin is charged up for war, too. American pundits and politicians are in a state of semi-hysteria over the concept of Russians shooting Middle Easterners before the United States does. What will it do to America's standing as the Leader of the Whole World?

What will this war look like? Can it be won? Or does it just mean that more people will die and be displaced, with everyone deeper in the muck than when the war started?

Right now, France and Russia are just launching air attacks. As is the US, which has actually been doing it as much or more than others for quite awhile, but let's not let reality creep into the reporting.

Will that do the trick?

No. Nobody has ever won a war with air power alone. Only ground troops can take and hold territory.

How about if the US, France, and Russia arm, aid, and train local anti-ISIL good guys, give them amazing air support, and let them take out the evil-doers? The US just spent half a billion dollars on such a program. When the general in charge was asked by a Senate committee how many Western-friendly, moderate anti-ISIL Syrian freedom fighters the program had trained, he said, "Four or five." Four or five? At a hundred million dollars apiece, he really should have known if one of them went missing. It was a symptom, not an aberration. The US had previously spent $25 billion to train and equip the Iraqi army that broke and ran when they were attacked by ISIL.

Jeb Bush said, "This is the war of our time." As for sending American ground forces in, he said, "Absolutely we will. We fight to win and then we pull out." Which is an astonishing statement because it demonstrates that he is dumber than his brother.

George W. Bush went into Iraq and Afghanistan with the exact same plan, "Fight to win and then we pull out." He and his crew, raised on movies about World War II and inspired by the collapse of the USSR, imagined that it was only Hitler-Lite dictators who stood between the peoples of the world and their natural, innate yearning, to live in free-market democracies. Remove the evil doers and the rest would just fall into place. But now we've seen what disasters can follow the get-in, pull-out plan, and there's no excuse.

ISIL controls and administers territory. It raises taxes, supplies services, and fields an army. It is a de facto state. The goal is to have someone different, someone benign, take over. Regime change.

Can that produce a better world? Or will a new group rise up, worse than ISIL?

Regime change, as President Obama has noted, won't succeed without an occupation. The two most successful US occupations—the ones that made George Bush think it would all be as easy as it was inevitable—were of Germany and Japan. But not all occupations are created equal.

There are three conditions that set up an occupation for success:

It's young men who fight, kill, and provoke. So first, kill all the young men. In Germany and Japan, that wasn't a matter of policy, just a matter of fact. By the time of their surrender, all the able-bodied men between the ages of 15 to 60 were dead or wounded. Then convince the people who are left that it's their own fault, that their own leaders started it, and that the disasters visited upon them are justified. It also helps if the alternative is even worse. Most Germans had to have figured that being occupied by the Americans was far better than what they could have expected from the Russians.

ISIL has eliminated or suppressed so much of the population on sectarian, ethnic, cultural, and political grounds that people left are supporters or suppressed victims. Each atrocity is a deliberate provocation. If they're beaten and their territory is occupied, an effective and reasonably benign occupation authority may well be preferable to Assad on the Syrian side and the Shi'a regime on the Iraqi side.

Conventional wisdom, now, is that a Muslim population will only accept being ruled by fellow Muslims, and Muslims of the same sect. This may be exaggerated. Iraqis seemed to accept the American occupation. But by the time the Americans realized that they were in fact an occupying power, it was too late.

A successful occupation should be so overwhelming that it never needs a counterinsurgency. The official history of the German occupation makes this very clear: "On V-E Day, Eisenhower had 61 US divisions, 1,622,000 men, in Germany, and a total force in Europe numbering 3,077,000. When the shooting ended, the divisions in the field became the occupation troops, charged with maintaining law and order and establishing the Allied military presence in the defeated nation. This type of occupation was presumably capable of squelching incipient resistance since none was evident." (The US Army In The Occupation Of Germany: 1944-1946 by Earl F. Ziemke)

A failing occupation is a counter-insurgency. The US Army's counter-insurgency manual was rewritten in 2006 by General David Petraeus. It says that the counterinsurgents have to provide security from political violence and from ordinary crime, provide basic economic needs, essential services (water, electricity, sanitation, medical care), sustain key social and cultural institutions and the society's basic quality of life. This list is essentially identical to what the Nuremberg principles said was required of an occupying force. Indeed, failure to provide them would constitute a war crime. Successful regime change and occupation requires that kind of commitment.

Against ISIL, there are additional complications. Ideally, perhaps necessarily, there has to be a coalition that includes the US, France, other EU countries, the Gulf States, Jordan, Egypt, and possibly other Muslim countries, all of which are Sunni. The people in the regions of Iraq and Syria controlled by ISIL are also Sunni.

They will not accept returning ISIL's portion of Syria to Assad, a murderous dictator who's killed far more people than ISIL. And worse, he's an Alawite, which is type of Shi'a.

Iran—the main Shi'a power—and Russia must also be part of the coalition. They won't tolerate the removal of Assad unless there is some substitute to protect their interests.

Iraq's government is dominated by Shi'a. Their sectarianism is often blamed for the rise of Sunnis who then embraced ISIL. They are also so inept and corrupt that their brand new $25 billion army fell to pieces. Giving them control back of the territories they've lost is practically a guarantee that the cycle starts again the moment anyone's back is turned. Also, the Gulf States would see it as increasing Iran's power.

Here's what's needed: A grand coalition. With all the powers named. Assad keeps the territory he currently controls. So does the government of Iraq. ISIL's territory, no matter what country it was in, goes under an occupation that will provide stability, employment, law enforcement, and a decent quality of life. It uses the UN Charter, or something like it, for a slow turnover to a local government. The interests of the Kurds and the Turks must also be accounted for.

This is not a call to arms. Or an endorsement of war. It is just an analysis. Lashing out with jets and drones just means more of what we have now. Anyone who talks about defeating ISIL with any less commitment than described above, and without accounting for the complexities, is a bloviating, lying, dangerous sociopath, a TV news commentator, or worse, a candidate for US president.