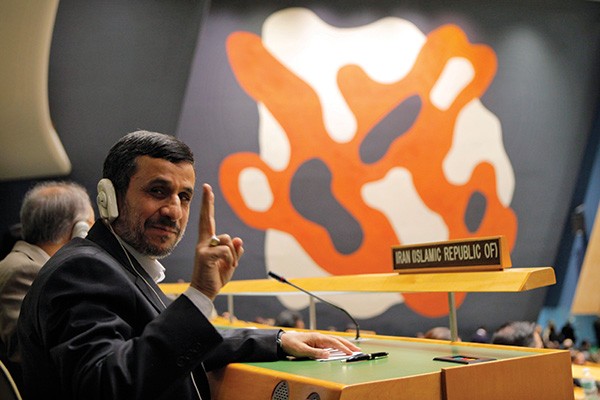 The United States of America and the Islamic Republic of Iran have, at long last, come out on the dance floor to take a spin with each other in front of—polls show—a mostly adoring public.

It's been called historic. It's been called the worst deal since Munich—a reference to the deal that allowed Hitler to grab a chunk of Czechoslovakia instead of launching a war like Newt Gingrich or Lindsey Graham are certain they would have done. But what it should be called is peculiar. Not the attempt at resolution—the conflict itself.

The United States has developed a severe re-enactor fetish, way beyond dressing up as Confederates and firing cannons without balls. Pretending that Saddam Hussein is Hitler to do a remake of World War II. Loving it so much they did it again. But screwed it up so it turned into a redo of Vietnam. With Iran, our leaders went for a reprise of the Cold War. This is neither flippant nor satirical. It's one of the few sustainable conclusions of any serious analysis.

The trouble started in 1979. Iran was ruled by the Shah, a 17th-century autocrat who happened to have jets, missiles, and a Gestapo. There was a revolution. He fled. The new regime said they wanted him back for a trial. But they almost certainly feared that the United States was stashing him until they could mount a counterrevolution and then re-install him on the throne. It had happened twice before. US president Jimmy Carter refused. Rioters stormed the US Embassy, which they correctly called the Nest of Spies, and took 52 Americans hostage. Legend has it that the Ronald Reagan's election team made a deal with the Iranians not to release the hostages until after the election. True or false, the hostage crisis cost Jimmy Carter the election and the hostages were released within minutes of Reagan's inauguration.

From there on out, it was demonization, propaganda, provocations, and proxy wars. From both sides. The Iranians playing the game as avidly as the westerners. Even Al Pacino couldn't have outdone the Ayatollah's performance as a theological godfather, urging the crowds to shout "Death to America," and to burn the American flag.

Iran was attacked, externally, by Saddam Hussein, and internally, by counterrevolutionaries. They began a series of purges, executing thousands, and sent teams to assassinate opponents who had fled into exile. They believed that their revolution was so glorious it could be marketed for export. They funded groups who set off bombs and bragged about it, like Hezbollah.

After 9/11, the Iranian people and the leadership both expressed their sympathy for the Americans and denounced mass murder. When the United States invaded Afghanistan, the Iranians provided essential assistance. George Bush, high in the grandeur of his God inspired visions, responded by naming Iran as part of the Axis of Evil. Still, a year later, Iran reached out with an offer to negotiate on all the issues between the two countries. That administration, still wallowing in their succulent fantasies of regime change with every enemy, ignored the opportunity.

Iran had developed a nuclear program under the Shah. The Ayatollah disapproved. Nuclear development ceased completely and did not resume until after his death in 1989. Iran signed the Nuclear Non-proliferation Treaty, but engaged in a series of actions that made it look like they were up to no good.

Hysteria ensued. They had to be stopped! Bomb them? It would only put them back two years or four, maybe. Invade? With what army? The US military was exhausted by Iraq and Afghanistan. Who would pay? America was in the midst of auto-asphyxiation by debt crises. Israel could strut and fret upon their stage, but Iran was neither Syria nor Iraq, with a single plant, built by foreigners, that could be taken out in a single air-strike.

Yet neither side would back down. The only scenario left was comically bloody tragedy.

Why had it come to this? Both countries had regimes that justified themselves and their every excess with an enemy. They were addicted to enemyship. Stripped of enemies, their citizens would see how dreadful they were. But why did these two pair up? Because they had dissed each other. Like two ghetto teens who had insulted each other's Nikes and were ready to kill for respect.

So it's astonishing that in the throes of such adolescent posturing, they decided to stand down instead of kill. Consider it to have been a Christmas present—with apologies if you're an Islamist, Hindu, atheist or some other other—to the world.