Body Politic: Only People Are People 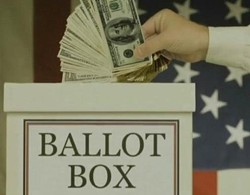 It's time for a couple of constitutional amendments.

A CBS/New York Times poll found that 84 percent of Americans think that money has too much influence in politics. Even though it's based on evidence and on the testimony of players as diverse as Barack Obama, John McCain, and Donald Trump, it is still an astounding, astonishing, amazing level of agreement. For comparison: only 79 percent of Americans think the Earth revolves around the sun, 76 percent know that the country from which the US won its independence was Great Britain, 60 percent admit the Earth is warming, and 32 percent believe in evolution through natural selection.

To put that number in perspective, 15 percent believe that mind control technology comes through the TV set, 14 percent believe in Bigfoot, 13 percent believed Barack Obama was the antichrist, and six percent that Osama bin Laden is still alive. To get all the way down to five percent, you have to find people who believe that Paul McCartney died in 1966.

Who are they? (Not the McCartney conspiracy theorists, the more money in politics believers.) Among that strange, even malignant, minority are Associate Justices of the Supreme Court Clarence Thomas, Anthony M. Kennedy, Samuel A. Alito, Jr., Antonin Scalia (when he was alive), and John G. Roberts, Chief Justice of the Supreme Court. Neil Gorsuch and Brett Kavanaugh will almost certainly join the list. The Five-Percenters are a tiny minority in the real world, but on the Supreme Court they are a majority. No matter what walls are erected to keep money out, they get to the gates and open them up to let the barbarian hordes of finance rush back in.

Money in politics is the issue that underlies almost all of our other issues—health care, taxes, inequality, the environment, energy policies, infrastructure, and on and on—and prevents rational solutions.

Short of the election of a Democratic president and a Democratic Senate and the luck of having at least two of Thomas, Alioto, Gorsuch, Roberts, and Kavanaugh debenched due to disease, death, or impeachment—all in the same time frame—how is it possible for people to regain even some of their power against the fiscal barbarians?

The pro-money, pro-corporate court's reasoning is based on two ideas. One: that corporations—since they represent groups of people—should have many of the same rights as people, most particularly the free speech rights of the First Amendment. Two: Money spent on, or toward, or involving speech has the magical effect of transforming gelt into gab and therefore cannot be regulated.

The idea of corporate personhood goes back to the 1870s. It was promoted by the railroads, the big money abusers of power and influence buyers of the day. The next big step came in the 1970s. It was driven by one man, Lewis Powell, Jr. He had created a memo for the Chamber of Commerce saying that US corporations and big business had to launch a movement to save themselves and the American way of life and outlined how to do it. When it was written, the Cold War was at its height, there was a hot war in Vietnam, proxy wars in Africa and South America, and violent confrontations inside the US. Yet Powell singled out one person as the greatest threat, a consumer advocate Ralph Nader.

In the famous memo, Powell noted that Nader had proposed going after the executives with actual criminal charges when their corporate actions had killed and injured people. That sounds quite reasonable. Until you realize what Powell was. Quick bios of Powell refer to him as a "corporate attorney," of polite and gentlemanly demeanor. A slightly closer look reveals that his primary clients were cigarete companies and the Tobacco Institute, the organization that practically invented fake science and public relations campaigns blowing smoke rings of confusion. The final reveal is that Powell was more than a mouthpiece. He was on the board of directors of Phillip Morris, making him a member of the gang. That company would be the lead defendant in a massive RICO suit against the industry. They would be convicted of decades of deceit and deception, corruption and frauds. The judge went out of her way to single out the lawyers as criminals in a long-running "racketeer influenced and corrupt organization," though they could not—she lamented—face criminal charges as individuals.

Long before that, Powell had become a Supreme Court justice, where he wrote the majority opinion in Bellotti, giving free speech rights to corporations, and joined in Buckley v. Valeo, which held that campaign spending could not be regulated because it was free speech. Together, those decisions were the foundation for Citizens United. The court's decisions in those cases work fervently to sound like idealistic applications of the First Amendment. But in free speech cases where the defendant was a student, a district attorney who revealed corruption, a prisoner, or a peace group, the Big Money Five see—very clearly—that free speech must be limited for those who are not rich and powerful. In the words of Ruth Bader Ginsberg, free speech has been "weaponized" for the Class War of the top one percent against all the rest.

If the Court is going to say that all attempts to limit money in politics are forbidden by the Constitution, what can be done? Amend it. With two amendments:

The 28th Amendment: Only people are people with inherent rights. Corporations are not people. They only have the rights bestowed upon them by law.

The 29th Amendment: While free speech must be upheld, money is not speech. Spending can, therefore, be regulated.

Constitutional amendments are hard to pass. They often take decades. However, even the attempt will invigorate Democrats in the House as they battle to get anything through the Senate and the President. It will force opponents to defend corporations over people and defend the power of money over people. "I'll Believe Corporations Are People When Texas Executes One." It's a bumper sticker battle that they will lose. Order yours now.