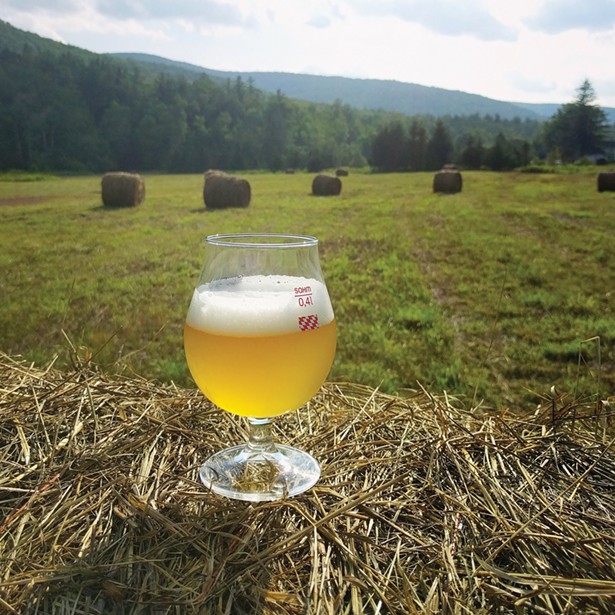 Beer connoisseurs are thirsty for more than mass market lager can deliver. While esoteric hops and heirloom grains have become de rigueur at taprooms across the country, the hyper-regional explorations of flavor more and more beer lovers are seeking aren’t widely available. But beer lovers’ quest for precise evocations of terroir happens to be dovetailing with the desire—and ability—of brewers to do just that in New York.

The word terroir, for the uninitiated, refers to the characteristic taste and flavor of the product imparted by the complete environment—the region’s general climate, a year’s particular weather, the soil, topography, even the aspect of the slope—the grapes (or in the case of beer, grains and hops) were grown in.

While terroir is usually associated with wine, the conversation around terroir has moved into other arenas, primarily coffee, whiskey, chocolate, and of course, beer. New York State—especially the Hudson Valley—has become part of a quiet but growing movement of brewers, farmers, and scientists across the country eager to explore regional nuances in grains and hops.

In Oregon, for example, Coleman Agriculture and Oregon State University have embarked on a hop terroir study that aims to establish how brewers can create the best beer by teasing out different flavors in hops in different regions. Similar experiments and studies are happening in New York. We spoke to several brewers and scientists on the forefront of this journey, to learn what they have discovered so far, and what they were eager to explore further. Read on for their thoughts, and a brief primer on the history of beer agriculture in the Empire State.

Beer is comprised of water, hops, grains, and yeast. All of these bring something to the flavor party, and our understanding of just how large that effect is has been evolving rapidly in recent years, thanks in large part to the farm brewing law passed by Governor Cuomo in 2012. The bill was designed as an economic play to create new businesses and jobs, give current farmers more work, and bring in tourists.

The incredible success of the program—there are now 467 brewers in New York State (compared with 95 in 2012), with an estimated annual economic impact of $3.4 billion—has had far-reaching consequences for, counter-intuitively, terroir. “Without the farm bill, it’s hard to imagine achieving the progress we’ve made in understanding how hops and grains grow differently in New York than in other regions of the world,” says Jacob Meglio, co-founder and managing partner at Arrowood Farm Brewery in Accord. “It enabled farmers and brewers to experiment with hops and grains as an investment in the future, and without it, it would have taken a lot longer to be where we are today.” 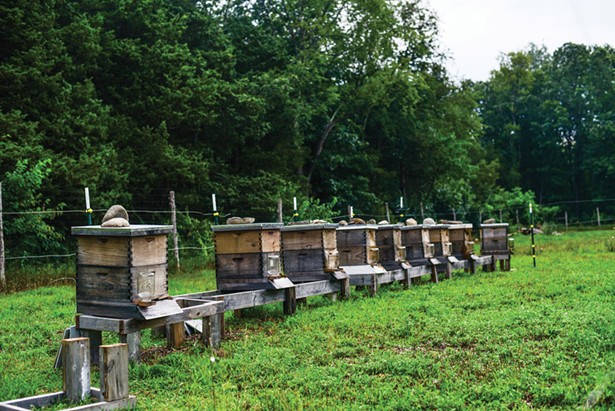 These requirements have inspired, for the first time in more than a century, an explosion in agricultural innovation in New York’s beer-adjacent farming industry.

Hops are the flowers of the plant Humulus lupulus, and are used to flavor and stabilize beer. They can, depending on their variety and environment, add notes of citrus, tropical fruits or berries to beer.

In the 1800s, New York was the hop capital of the world, with an estimated 80 percent of the country’s market share growing here between in the mid-19th century, according to the Onondaga Historical Association. Blue mold, a deadly fungal disease, decimated the industry in the late 1800s, and New York soon lost its hop crown to California and Oregon.

While New York is now the fifth-largest hop grower in the United States, with 10 commercial farms belonging to the New York Hop Guild and several other small-scale hop farmers around the state, the quality of what’s being grown has increased exponentially, thanks, in large part to experimentation. “We started as a hop farm in 2013 before we moved into brewing in 2015,” says Meglio. Arrowood encompasses 48 acres, with about 20 acres devoted to experimental hop and grain farming projects. “We were inspired by the farm act to begin farming. We have worked closely with Cornell on experimental hop and grain varieties to figure out how to get the desired oils and aromatic compounds we wanted.”

The hardest note to capture, Meglio reveals, is that mandarin orange profile he was seeking for a New England-style IPA (NEIPA). “We wanted to do a 100 percent locally grown NEIPA, but it was so hard to find that profile without West Coast hops,” Meglio explains. “But Chimney Bluffs Hoppery [in Wolcott,] managed it with their [strain of] Cascade hops. We get a light lemon lime from Cascade, whereas a West Coast hop would be grapefruit and mango. It’s really cool to explore what New York can do, and how different a style can taste with all locally grown ingredients.”

Hutch Kugeman, the head brewer at Hyde Park’s Culinary Institute of America, has been a close observer of New York’s evolving beer seen since 2012, when he started brewing beer at Crossroads Brewing in Athens. “At the CIA, we don’t have to work with local maltsters and hop growers, but I do because I’ve been increasingly impressed by the quality of their products,” Kugeman says. “For open-sourced hops like Cascade, a classic American hop that can grow anywhere, it’s interesting to see how different it tastes here than Oregon or Washington. In the Northwest, you get pine and grapefruit with Cascade, but in New York we’re getting a lot of spice.”

As with hops, New York grew much of the country’s grain for beer in the 19th century. After the Farm Bill was passed, grain-growing—and malting—became big business again in New York. (Maltsters take raw barley and other grains from farmers, steep them in water, rest them in very exacting conditions to ensure germination, dry them in a kiln or roaster, and then send them to brewers who use them to make beer).

The grain for beer is utterly different than the grain needed for bread, of course, and like hops, no farmer mastered the art of growing beer barley, rye or wheat overnight. “When we first started growing grains and using locally grown grains, it was clear that no one really knew what they were doing quite yet,” says Plan Bee Farm Brewery’s co-founder Emily Watson. Founded in Poughkeepsie in 2008, Plan Bee has a four-acre grain field with different specialty wheats, corns, and ryes on rotation, an acre for hops, 4.5 acres for wild apples and raised beds with hot peppers, strawberries, lavender and more. Plan Bee also forages for wild carrot seeds, dandelions and other flavoring agents on their 25-acre organically farmed estate.

“I’ll never forget the first batch of malted grains we got,” she recalls. “They were malted in a fish tank, and they were quite funky. But as the opportunities and competition increased, the quality went way up, and we are now producing 100 percent New York State beers that are a completely distinct and delicious expression of place.”

Arrowood, like Plan Bee, believes that working with farmers who use organic growing practices is essential to truly reflect a region’s terroir. “If you’re using grains that are grown conventionally, that pesticide and spray will kill not just pests, but the microflora and yeast on the grains, and that eliminates the flavors that give it its special regional distinction,” Meglio says. Not that it has been easy to convince new farming partners to agree to not spray.

“When we started working with the farmer down the road from us on heirloom rye, we told him we’d pay triple if he didn’t spray, and he thought we were nuts,” Meglio recalls. “He kept saying, ‘But it’s going to cut the yield in half,’ and I kept saying, ‘We don’t care!’ And now that he’s been doing it for a few years, he gets it. We love how it changes depending on the weather. In hotter and drier years, for example it’s spicier. You don’t get that with conventionally grown grains.”

Water, meanwhile, may seem like a nothing ingredient, but brewers say it’s an essential part of the terroir puzzle. “Water gives our beer its sense of place,” says Mike Carcone, cofounder of West Kill Brewing in West Kill. “Our brewery is located on a farm that has been in my family since 1929. I remember growing up, my grandparents were obsessed with our well water. It was such a legend in our family that cousins, aunts, and uncles would come over and fill up five-gallon jugs to bring home. When I got into brewing, I decided to test the water and see if it was as special as it was supposed to be.”

It was, as it turns out. “The mineral content is perfect for brewing beer,” Carcone says. “It’s especially soft, and allows our lagers to be clean and crisp, and gives the flavors of our IPAs and opportunity to shine.”

Meglio agrees that water can have an outsize effect on the end product. “We love our spring-fed water here, but we wondered if we were putting too much of an emphasis on it, so we did a test,” Meglio says. “We made the same beer with five different waters—ours, a few store-bought and distilled water. They were completely different, because the yeasts and microflora in the beer interacted with different elements in the water differently. Some were sweeter, some were drier, and even the ABVs were different.” Arrowood’s water, he says, produced the best one. The worst, “by far,” was the distilled.

The final component in beer is yeast. A microscopic unicellular, nucleated fungi, yeast transforms wort into beer by converting glucose into ethyl alcohol and carbon dioxide (beer’s booze and fizz). This year, Kugeman will give his student brewers the assignment of culturing yeast from the CIA’s campus for a completely campus-grown beer. “We have wheat and hops growing on the roof, and we’re going to harvest yeast from the campus apiary,” he says.

Plan Bee also harvests wild yeasts for its brews from its apiary, and the team at Arrowood collects much of their yeast near their apple orchards.

The future of New York’s terroir may be even more delicious. Cornell University’s Cornell AgriTech R&D lab has done more than anyone—the brewers all first to say—in helping push the beer industry forward through experimental hop and grain breeding programs, all of which are designed to figure out what grows best, and most deliciously here.

This summer, Cornell announced that a $300,000 investment from New York State will help fund the development of new signature New York hops varieties. The program will be led by Larry Smart, professor of horticulture in the College of Agriculture and Life Sciences. “Working on capturing New York’s terroir is really fun, and it can vary significantly even within the state,” says Chris Gerling, senior extension associate at Cornell AgriTech’s Craft Beverage Institute, and one of the leads on the program. “It’s fascinating to express a sense of place through craft beverage, and consumers are increasingly engaged by the prospect too.”

New York growers will get first dibs on the new varieties, with several, including several established growers across New York State, such as Rick Pedersen of Pedersen Farms, Chad Meigs of the Bineyard, and John Condzella of Condzella’s Farm already queuing up to plant them.

But the real winners? The craft enthusiasts who may soon be able to wax enthusiastically about the differences between New York’s trademark hops grown in the Hudson Valley versus Finger Lakes.


For a taste of the best New York terroir today, and a sense of what’s to come, check out Arrowood’s Shaft 2A, a dry-hopped Pale Ale that stars 100 percent New York hops and grains, fermented with house ale yeast for two weeks. There’s the tropicality—pineapple and mango—you’d expect, with a deeply balanced bitterness and tang, red and black mountain fruit, subtle funk, New York pine, Yankee attitude.