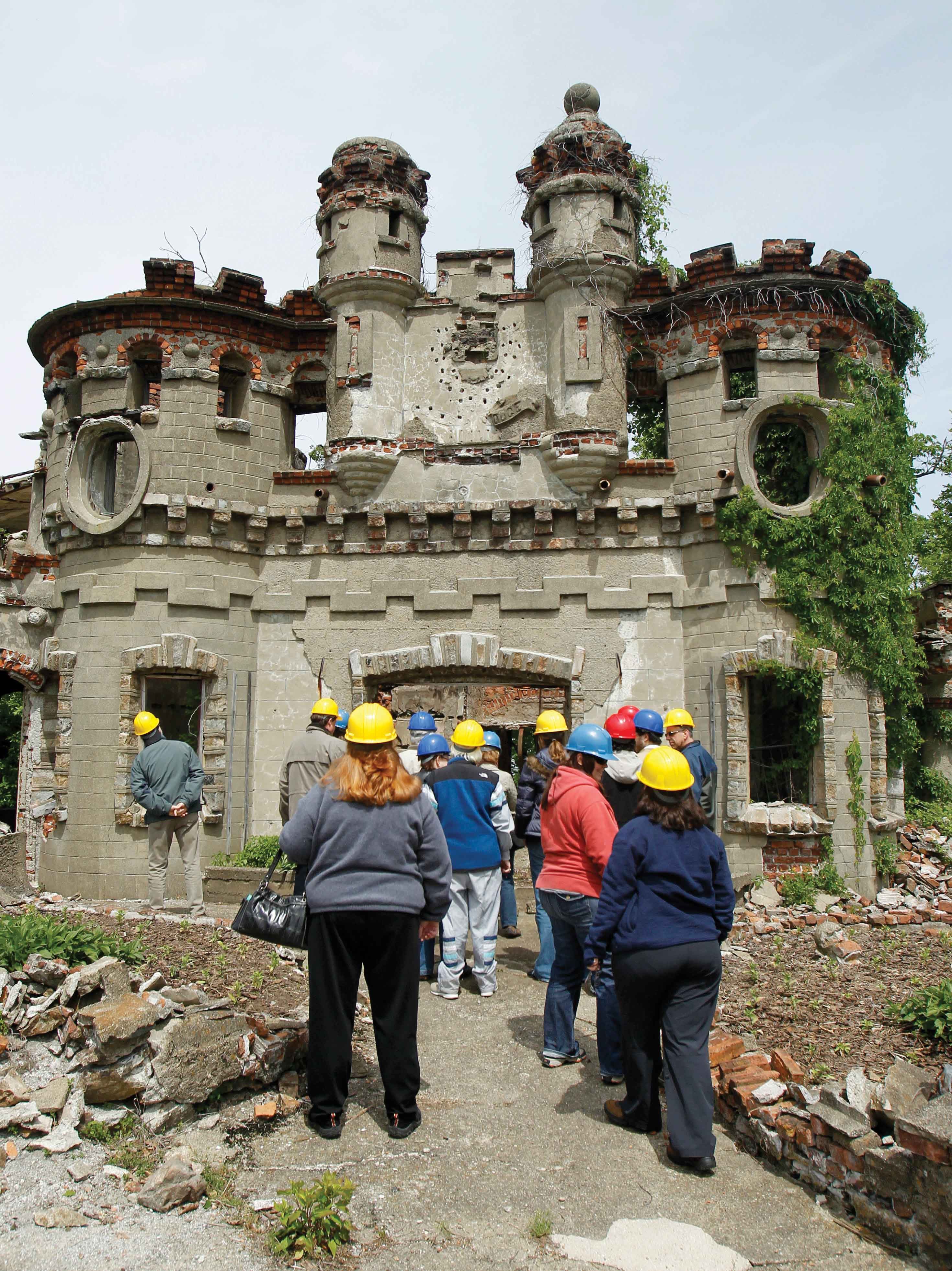 Bannerman Castle, on the 6.5-acre Pollepel Island in the Hudson just south of Beacon, was constructed from the hand-drawn sketches of amateur architect Francis Bannerman VI in the early 1900s. Once inhabited by native tribes before being used as a (failed) defense against British ships during the Revolutionary War, the island eventually turned into a popular haven for recreation and repose. When Bannerman took ownership of Pollepel in 1900, he would invite kids to the island for a day of adventure, rife with swimming, fishing, and exploring.

Today, island gardens with antique roses, black walnut trees, blackberries, and herbs parallel the flora that would have been planted in 1914. A wooden wagon wheel rests downhill from the antiquated grotto. Bed frames and bayonets are hidden in the ruined framework of the main residence. Rocky trails twist to give visitors changing views of the Hudson River. The entire island smells like honey.

Since the collapse in December 2009 of much of much the castle’s front and east walls, it’s a race against time to stabilize what’s left of the structure. Author and Bannerman Castle devotee Thom Johnson optimistically says, “If anything can be built, it can be rebuilt.” In order to preserve the main residence, construction crews have to keep one of the two remaining sides standing—if one goes, the other will follow. The elements pose a major problem: If the stabilization isn’t finished on time, the building won’t likely endure another winter; in the meantime, water has to be kept out of the structure.

Despite comments that the project’s supporters cannot possibly prevail in this labor of love, Neil Caplan of the Bannerman Castle Trust says, “Well, we’re doing it. It’s happening.” Johnson feels that “the study of art history, on any level, helps us learn and grow.” Three West Point cadets contributed to the project by installing a permanent watering system for the gardens.

Phase one of the Bannerman Island Residence Emergency Stabilization Project is expected to be complete by July. The Environmental Protection Fund Challenge Grant is helping to give the main residence a new roof, first and second floors, and a temporary staircase. Future plans include an archeological dig, the installation of a permanent floor, restoration of the exterior, and renovation of the interior. There aren’t enough detailed photos of the original castle, and while the buildings will never replicate the original, the interior will be an interpretive take on the early design. Eventually, the residence will be turned into a museum.

Hard-hat tours of Bannerman Island run through October. Tours are $30 for adults and $25 for children 11 years old and younger, and a percentage of the tour fees will go to the project’s trust. The Pollepel tour boat departs every Saturday and Sunday at noon from Torches Landing on the Newburgh Waterfront and at 1:30 p.m. from the Beacon ferry dock. Check back in July for added tours on Fridays. Boat tours: (800) 979-3370; www.prideofthehudson.com. Adventurers can travel by kayak from Beacon, Cold Spring, and Cornwall. Some kayak excursions include equipment, instruction, a guide, and a packed lunch.

For more information about Bannerman Castle, to make a donation, or to volunteer: www.bannermancastle.org.