My father and I decided to embark on a road trip from New York that would take us through Virginia, North Carolina, South Carolina, Georgia, Alabama, Mississippi, Louisiana, Texas, Tennessee, and Kentucky. The route was designed solely to seek out as many variations on American barbecue cookery as we possibly could within three-and-a-half weeks. As a line cook and aspiring chef, I have a shameless and ferocious obsession with pork, and it's pork that we were after. Pork of all cuts and preparations. Obviously, some beef brisket, fried chicken, and biscuits made their way into the daily roster of barbecue consumption as well. We sought out to learn what differentiates each town's barbecue from the next, down to the most minute detail. We decided to approach the trip with no biases. It would take the juiciest, most tender rack of ribs, with the perfect proportion of smoke, spice, sweetness, and porky flavor and the perfect bark-to-meat ratio, to determine where my personal preference lies.

Having just left my job as a line cook at Picholine in Manhattan, I set out to spend a few days at each stop, working alongside pit masters to learn their craft. My father, Doug, a professional photographer, came along with me to document every waking moment of the adventure. Not only did we explore regional differences from state to state, but we also made sure to include other tangential endeavors that would better inform our trip along the way. We observed animals being slaughtered, we visited small-and large-scale pig farms, we visited hog processing plants—all in the name of gaining a deeper and more well-rounded understanding of one of America's great culinary traditions. The photos, discovered secrets, and recipes made their way each day to our blog, Adventuresinbbq.tumblr.com. Given the time constraint of three-and-a-half weeks, we budgeted our time so as to land ourselves at the midway point in the great state of Texas. Some key players were unfortunately passed up along the way, but the trip didn't end upon our return. Though I am now back in Manhattan working as a line cook at the newly opened restaurant Allswell, in Williamsburg, Brooklyn, and my father has returned to the Hudson Valley, phase two of the trip is in the works. We hope to pick up where we left off and revisit those places that we weren't able to visit. By the end of the three-plus weeks, we had fully exhausted our capacity for barbecue. There were moments along the way in which my body was so unhealthily malnourished, due to the sheer volume of fat consumption that had occurred, that I spent my evenings lying in the fetal position in our hotel room, hoping to heal before the next morning's endeavor. Nothing sounded more delicious than a raw kale salad at those moments. But the trip was worth every calorie, and the amount of information we acquired, not to mention the people and places that we grew to know and love along the way, was incredibly educational and continues to be inspirational for both of us as we consider the next trip, and carry on back home in New York.

Molly Baz is a line cook at Allswell in Williamsburg who grew up in the Hudson Valley. Douglas Baz is a Dutchess County-based freelance photographer. Their blog: Adventuresinbbq.tumblr.com. 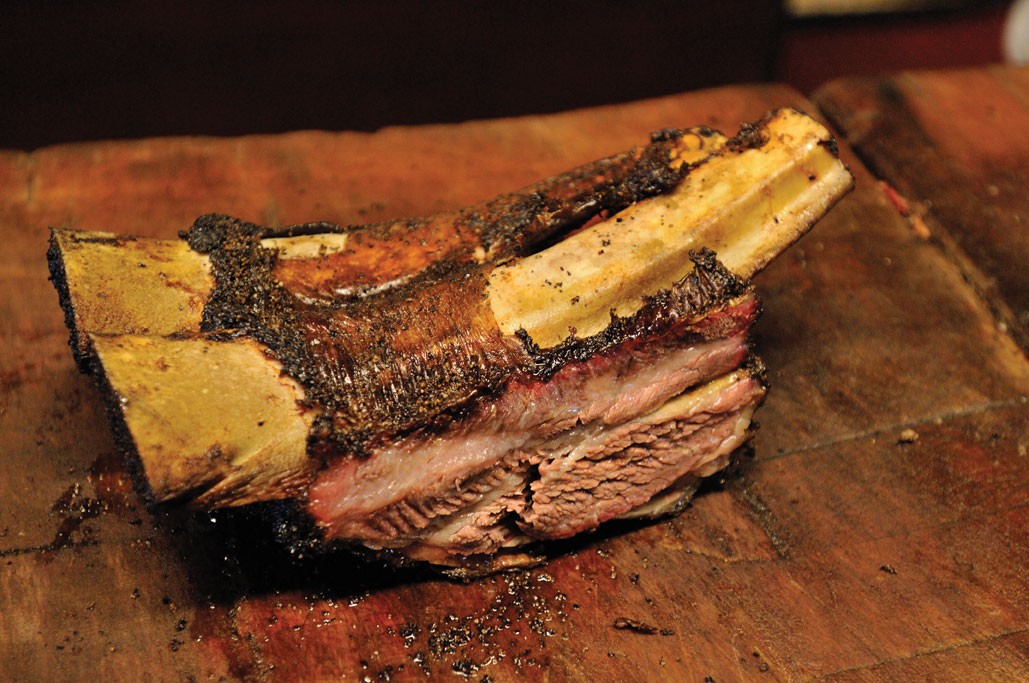 Beef Rib—King of BBQ
I’m not sure I can do justice to the revelation that occurred upon my first taste of Texan barbecued meats but I will try nonetheless. The brisket: tender as seems humanly possible, with an eighth-inch layer of partially rendered, melting fat in the middle, topped by a dark crust of well-seasoned bark to hold the slice together. The sausage: a taut encasement that literally popped with the slightest pressure to an incredibly moist, coarsely ground interior. The sensation of biting into this hot ring was enough to confirm its place in my hierarchy of encased meats, to say nothing of the flavor enclosed therein. This photo captures a classic beef rib, as prepared at Black’s in Lockhart, Texas. 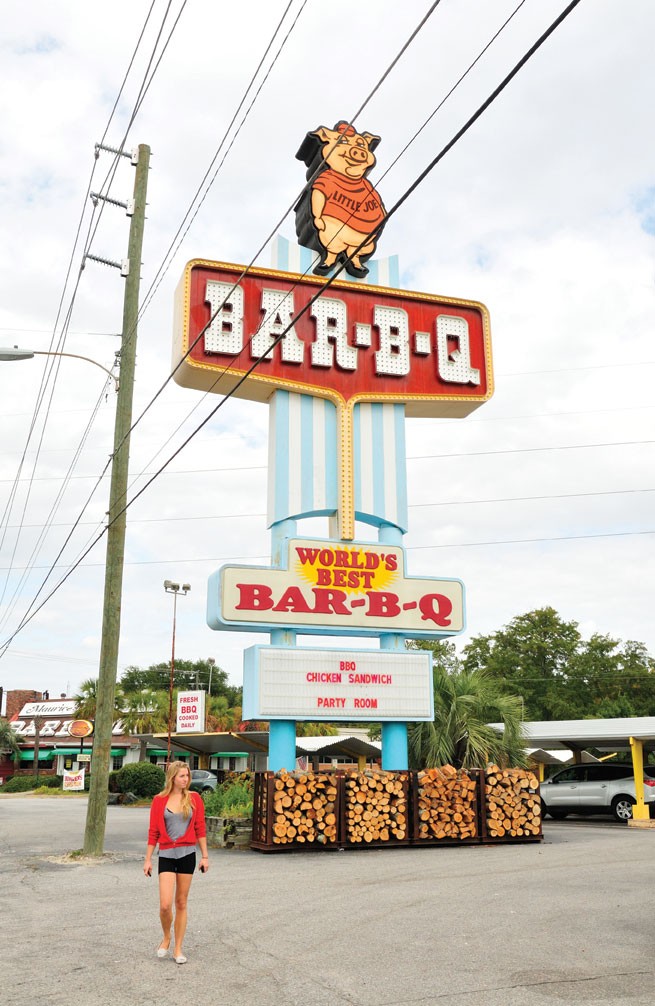 The South Will Rise Again
Heading south from North Carolina we landed ourselves at a classic old-school South Carolina institution—Maurice’s Piggie Park. I’m not gonna sugarcoat things here: This place is outrageous. Outrageous in the sense that Maurice is still flying the Confederate flag 146 years later, and his restaurant is bursting with “Southern pride” (read: white suprematism). All judgments aside, however, this man makes a baller barbecue sauce and some seriously tender ribs.

The Salt Lick
No trip to Texas is complete without paying a visit to one of the state’s most renowned barbecue establishments: The Salt Lick. An hour or so outside of Austin, on a beautiful ranchlike estate, this place has become a barbecue epicenter, cranking out hundreds of pounds of smoked meats daily. We sampled each of their cuts, but were ultimately most blown away by those we tasted the next day at Louie Mueller Barbecue in Taylor, Texas. Don’t get me wrong, the Salt Lick is not to be missed—it just might not be the best barbecue in town.

Faded Glory
Driving down an open road in West Helena, Arkansas, we happened upon a down-trodden, barred-up barbecue shack: Shadden’s, a joint that came recommended from several sources but had unfortunately been closed due to a death in the family. Though it hadn’t been in operation for over a year, the place still rang of years and years of pit-smoking glory. It was an eerie endeavor, the pit still standing, cold and rusty alongside the no-longer-operating storefront. I can only imagine the history behind its closed doors. It’s a shame to have missed it.

Meet the Flintstones
We ate some barbecue in Texas. Some serious barbecue. But nothing could touch what we ate one late afternoon at Louie Mueller Barbecue in the small town of Taylor, an hour northeast of Austin. This place had everything right from the clean, dark brown, burnished interior that revealed years of pit smoking to the perfect ratio of salt-to-pepper seasoning on the bark of the beef ribs and brisket. Pictured here is a customer with one massive and decadent beef rib, generously marbled with fat.

Barbecue with a Smile
Daddy D’z was a dimly lit, neon-signed joint we passed through on our way out of Atlanta. Atlanta wasn’t exactly a major stop on our list as it doesn’t seem to boast a barbecue tradition specific to its own history. Atlanta barbecue turned out to be more of a composite of the various styles we encountered as we ventured west. But this particular place had good character, and the loveliest waitress to boot.

Heart Attack for Breakfast
Loveless Café, probably Nashville’s most famous breakfast, is the sole establishment we visited while passing through Music City. If I could have put this place in my suitcase, to bring it back to you all, I would have in a heartbeat. We needed to have it all so our waitress kindly hooked it up and returned with a platter containing the following: fried chicken, country ham, pulled pork, turnip greens, hash brown casserole, each of the four types of gravy available for unlimited biscuit extravagance, and a side of hoecakes. 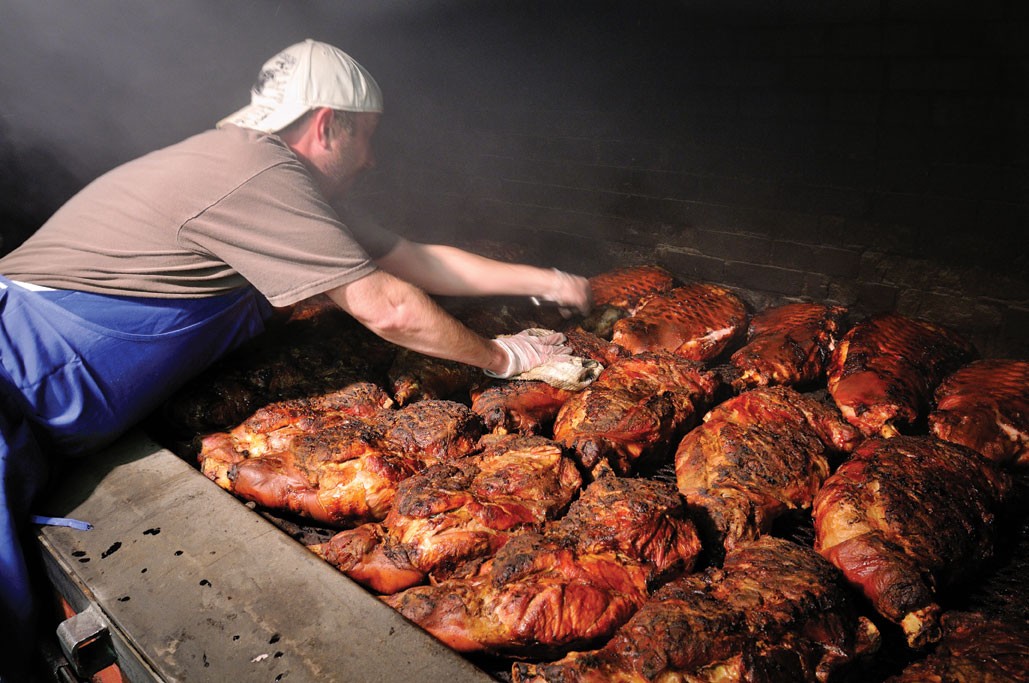 Welcome to The Pit
Everyone speaks of Southern hospitality and we knew we’d run into it down South, but the kind of welcoming that we received at Lexington Barbecue was unparalleled in any of my experiences working with chefs in the Northeast. Lexington Barbecue is now run by the second and third generations of the family and every last one of the workers accommodated our perhaps ridiculous request to come into the kitchen in the middle of dinner service and hang. This pit master introduced us to all aspects of the operation, from smoking and then chopping the shoulder to order and throwing it on a hamburger bun with three ladles of vinegar sauce, to dropping hush puppies in the fryer and grilling hamburger steaks to nothing below medium well.

The Right Reverend Al Green
Knowing we would arrive on a Saturday evening, we did some preemptive research en route to Memphis and landed ourselves in the best possible Sunday morning scenario: Reverend Al Green’s Full Gospel Tabernacle Church, in a residential neighborhood of south Memphis. This is the Al Green, at home in his own church, in all of his soul-singing, Jesus-praising glory. There was not a moment of silence in the room and we experienced an unparalleled level on energy that morning. He sang, he preached, he danced, and Al Green healed even the most desperate of souls into the late afternoon.

Dutchess BBQ Brings the Mouthwatering Taste of the South to Poughkeepsie