"Basquiat x Warhol" at The School in Kinderhook 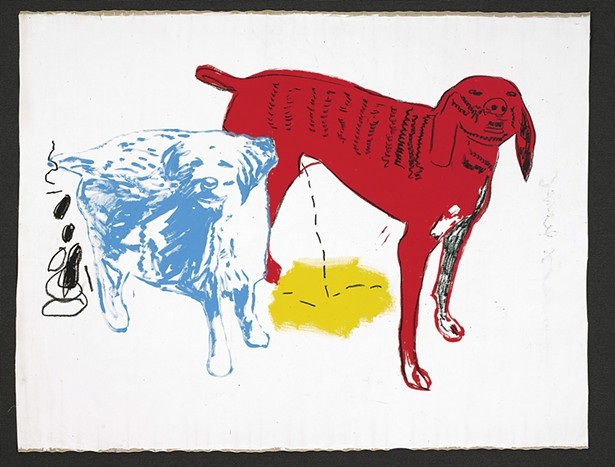 It feels safe to say that no two modern artists are more emblematic of Downtown New York than Jean Michel Basquiat (1960-1988) and Andy Warhol (1928-1987). Warhol was the Originator, the daddy of Downtown cool and the father of pop art; Basquiat was the next-gen upstart, the erstwhile graffiti writer whose jagged, colorful, neoexpressionist images smashed together the late 1970s/early 1980s Lower East Side mashup of rap, punk, and street art. Swirling about in the city's club scene and edgier art world of the time, it seems natural, in retrospect, that the two maverick masters would find each other—and work together. The series of collaborative paintings the pair made circa 1984-1985 is the core of "Basquiat x Warhol," an exhibition at the Jack Shainman Gallery's the School in Kinderhook through September 7.

On the surface, the union between the two—always platonic, according to those close around them—was also perplexing to many. By the time they met, Warhol, his '60s Factory days long behind him, had slipped into becoming part of the Uptown high-art establishment. His street cred was diminished, and many of the rebels he'd first inspired saw him as staid and irrelevant. Basquiat, by contrast, was the disheveled enfant terrible, a street kid of Haitian and Puerto Rican heritage who peddled his postcard-sized paintings on the sidewalk by day and tagged the walls by night. (The story of their friendship, depicted in Julian Schnabel's 1996 biopic Basquiat—with David Bowie playing Warhol—goes that it began when the audacious Basquiat spied Warhol in a restaurant and sold the elder artist some of his miniature works.)

That new blood and its reciprocal rebelliousness is all over the works featured in "Basquiat x Warhol"—although at the time much of it was first shown, in 1985, the critical reception was mixed. "[T]he collaboration looks like one of Warhol's manipulations," said the New York Times. "Basquiat, meanwhile, comes across as the all too willing accessory." Whatever the public's perceptions were, though, in the end the team-up proved short-lived. After a falling out, Warhol died at 59 in 1987 from complications following gall bladder surgery; Basquiat fell to heroin at 27 in 1988.

Along with the cream of their collaborations, "Basquiat x Warhol" features iconic and obscure works by both artists. The former grouping includes Warhol's Last Supper (Camel/57) and several large-scale oil and acrylic paintings by Basquiat; among the show's lesser-known items are Warhol's torso paintings and Basquiat's anatomy prints. Supplementing the exhibition are projections of Warhol films and a screening of the PBS American Masters documentary Basquiat: Rage to Riches. "Basquiat x Warhol" is on view June 1-September 7.

What You Can Get Away With