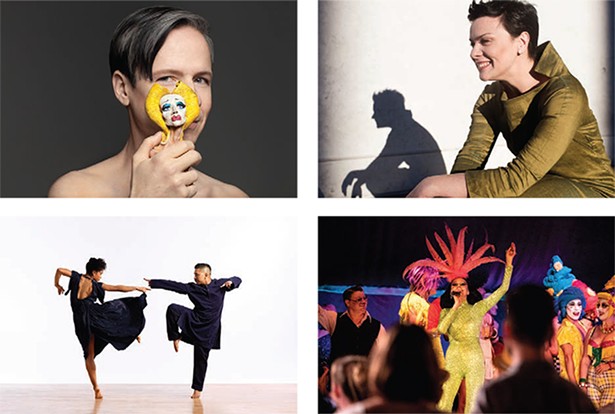 The crown jewel of all discipline-spanning Hudson Valley summer arts festivals is, arguably, Bard SummerScape. Founded in 2002, the seven-week series takes place on the campus of Bard College in Annandale-on-Hudson and is held in tandem with the two-week classical music-oriented Bard Music Festival, which was itself established in 1990.

Bard SummerScape 2019, which runs from June 29 through August 18, features performances and presentations in the genres of opera, theater, music, dance, film, and cabaret, as well as lectures and talks on related topics. Concerts, recitals, and screenings are mainly held in the college's stunning, Frank Gehry-designed Richard B. Fisher Center for the Performing Arts, while cabaret and other intimate events occur in the whimsical Spiegeltent, which is erected on campus every year exclusively for the festival.

For each season, SummerScape organizers select a single composer to be the festival's core focus and offer panels and presentations that illustrate links to the literature, painting, theater, philosophy, and politics that would have influenced the featured composer's life and works. This year's core composer is the Austrian-born Erich Wolfgang Korngold (1897-1957), whose epic, lavish compositions are the stuff of many a classic Hollywood soundtrack. The film series for SummerScape 2019, "Korngold and the Hollywood Score" (July 2-August 18), promises movies scored by Korngold and his contemporaries Bernard Hermann and Max Steiner, along with films chosen for their Viennese connections.

Opera this year includes Michael Gordon's modern "Acquanetta" (July 11-21), an homage to camp 1940s horror films, and Korngold's anti-dictatorship-themed "The Miracle of Heliane" (July 26 and 28; August 2 and 4); the latter will be accompanied by the American Symphony Orchestra conducted by Bard's president, Leon Botstein. Dance is represented by the world premiere of choreographer Ronald K. Brown's "Grace and Mercy" (July 5-7), which features an original score by Meshell Ndegeocello performed live by Peven Everett and others.

The 30th annual Bard Music Festival happens on the consecutive weekends of August 9-11 and 16-18. Titled "Korngold and His World," this "festival within a festival" surveys the composer's life and art with concerts of some of his greatest orchestral works and film scores and music by several of his influential contemporaries performed by a host of ensembles that includes Bard's renowned The Orchestra Now conducted by Leon Botstein or James Bagwell. Preconcert talks about Korngold and the musical selections enrich the experience.