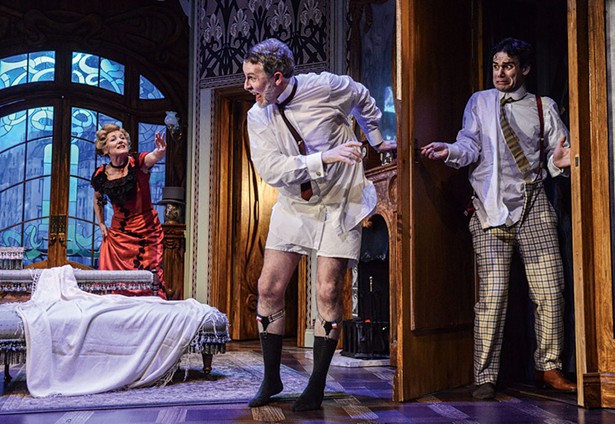 This month, Shadowland Stages in Ellenville will stage the US premiere of "Bang Bang!," an adaptation of a French farce by comedy legend John Cleese. The run is directed by James Glossman and features an ensemble cast including Sean Astin and Scott Shepherd. The play will run at Shadowland for a month in anticipation of a move to London's West End next year.

"It's very, very funny," says Glossman. "That's pretty much it in a nutshell."

Glossman says the idea to stage "Bang Bang!" came when he met Cleese a year ago and asked if he was working on anything. Cleese mentioned an in-progress adaptation of "Monsieur Chasse!" by French playwright Georges Feydeau that dates back to the late 19th century.

"(Cleese) was talking about how French farce was there to stick a pin in the overweening egotism of the climbing upper class, it's there to puncture people's pretensions," Glossman says. "And yes, that's true. It does satirize and comment on society. But in a lot of ways, farce is there to just send you out with a smile on your face. And that is immensely refreshing."

"Bang Bang!" is a saucy romp of infidelity and mistrust, which Glossman calls "sort of a relay race with doors. There's 10 characters running in and out of those doors, which is quite a lot for Shadowland."

Astin, perhaps best known for his role as Samwise Gamgee in the Lord of the Rings trilogy, plays Moricet, friend of Duchotel who has eyes for Duchotel's wife, Leontine. Duchotel is played by Shepherd, who in addition to extensive work in the theater, has also carved out a career in film, including playing opposite Tom Hanks in Steven Spielberg's Bridge of Spies. Leontine is played by Kathy McCafferty, who in addition to numerous stage and screen roles was seen by Shadowland audiences in the 2013 run of "Boeing Boeing," itself a French farce.

Other members of the cast include Robert Anthony Jones ("Finding Neverland" on Broadway) as Cassagne, while both Paul Murphy as Inspector Bridois and Julia Register as Babette will be known to Shadowland theatergoers from last year's production of "Jacob Marley's Christmas Carol."

While this production will be the American debut of "Bang Bang!", the show had a successful two-week engagement in early 2017 at the Mercury Theater in Colchester, England. Glossman says that Cleese has since been working on the script, which could be quite different by opening night. It's already quite different than Feydeau's original play.

"(Cleese) took the basic plot structure and then simplified things like the characters and situations," Glossman says. "The original is a very long play—it's a much larger cast. He streamlined it, but in a more essential way he took the thread of characters and situation and wrote a John Cleese script. It's like when Truman was president and the White House was falling apart. They left the facade, but they gutted the interior completely. It looked like the same White House, but was really a brand-new building. That's what this is. This is so much a Cleese script. This is not a translation; it's an adaptation."

Glossman spoke glowingly not only of the cast and everyone at Shadowland, but also of working with Cleese, which he considers a once-in-a-lifetime experience.

"The level of work that you're engaged in isn't going to be replicated," Glossman said. "You'll work with other people that will excite you as well, but it won't be this exact thing. There's only one John Cleese. There will never be another."

"Bang Bang!" opens on Saturday, August 11, with a preview that afternoon and one the night before. The play runs through September 9, with 2pm matinee performances on Sundays, and evening performances at 8pm Thursday, Friday, and Saturday. Tickets range from $34-39, with preview tickets available for $31. Discounted tickets are also available for students and theatergoers under the age of 40. (845) 647-5511.