Budget deficit mania grips the nation’s political elite.
Never mind that many people are more worried about finding a job, stagnant wages, home foreclosures, and the state of the Main Street economy.

Pundits and politicians from moderate centrists to the Tea Party right-wingers are frantically warning that if nothing changes, federal debt in 2050 will be three times the size of annual economic output—supposed proof that the end of America as we know it is at hand if we don’t make “tough choices.”

A rejoinder, one that showed it is possible to create jobs and grow a new, fairer economy while balancing budgets, was provided by progressive Illinois Democratic Rep. Jan Schakowsky, a one-time community organizer who is now a member of the Fiscal Commission; The Citizens’ Commission on Jobs, Deficits, and America’s Economic Future (CC), organized by the Institute for America’s Future; and Our Fiscal Security (OFS), a joint project of the Economic Policy Institute, Demos, and the Century Fund. On the right, a “road map” was offered by incoming Budget Committee Chair Rep. Paul Ryan (PR), a Wisconsin Tea Party golden boy.

On December 1, Bowles and Simpson submitted a final Commission plan for a vote two days later. Cutting the deficit prematurely and endangering job market recovery, it closed roughly two-thirds of the deficit with cuts, the rest with new revenue—and the cuts hit Social Security, Medicare, and other crucial social programs as well as defense and farm subsidies. Despite some tweaks of the BS draft to emphasize growth or to soften some blows to the middle class, the final BS plan made “tough” choices that would balance mainly on the backs of low- and middle-income Americans—the very people who were the big losers during the Bush years and the Great Recession.

Predictably, the BS plan goes easy on the CEOs, bankers, speculators, and rich people who caused the crisis—the very same highly paid people (investment bankers like Bowles) who, through the media that they control, are stoking the deficit mania. That prominently includes Peter G. Peterson, the billionaire investment banker (Lehman Brothers), one-time Nixon adviser, and co-founder of the notorious Blackstone Group.

This deficit grand opera plays out as a variation on a discordant theme: The financial meltdown—viewed two years ago as a crisis of capitalism requiring massive state intervention—has somehow (and so conveniently) morphed into a crisis of government. The villain in this mainstream-media fantasy is the welfare state. It is a crisis that demands sacrifice from average citizens. Underlying this blame-the-government meme is a drumbeat to unleashing rule of the markets—in health care, education, pensions, and everything else. It is as if the collapse of 2008 taught no lessons about the limitations of markets.

A review of the six deficit-reduction plans yields 10 points of advice.

1. America is not Greece. (And in the short term, the deficit is a help, not a hindrance.)
The 2010 fiscal year deficit of $1.3 trillion represented roughly 9 percent of America’s gross domestic product. This was the biggest deficit since the end of World War II, when deeper deficits did not inhibit growth and, in fact, turned out to precede two decades of shared prosperity.

However, with the 2008 collapse of the $8 trillion housing bubble, the year’s federal deficit compensated for declining consumer demand, saved or created as many as 3.7 million jobs, and helped stop economic free fall.

National governments do not operate like family households (which also go into debt, often wisely, for needs like education). Governments run surpluses or deficits in part as a reflection of business cycles and in part as a way to moderate business cycles. But according to Economic Policy Institute studies, debt does not constrain future growth.

Even if US debt rises to 70 or 80 percent of GDP in 2020, as different agencies project, it will still be moderate compared with many other rich countries (in 2009 it ranked behind 46 other countries, including Japan, which had debt equal to 160 percent of GDP). As the economy recovers, it will be easier to raise more revenue or make cuts that do not hurt low- and middle-income Americans and thus reduce the debt, even to the arbitrary, low goal of 40 percent favored by the BS Commission.

“The reality is, we should be doing something to boost the economy,” says Center for Economic and Policy Research Co-chair Dean Baker. “Near-term focusing on the deficit is next to crazy.”

2. In the next few years, the paramount fiscal policy goal should be stimulating growth and job creation.
That means, first of all, not scheduling any serious deficit-reduction plans before roughly 2015. The country needs faster job creation not only to reduce unemployment but also to push up wages. Faster job, wage, and GDP growth—whether stimulated by a 2011 Social Security tax holiday or new public investment—will also generate more revenue to reduce government deficits than an economy hamstrung by constricted public demand.

3. There is no reason to cut Social Security and many reasons to expand it.
As the BS plan states, Social Security does not—and by law cannot—contribute to the deficit. By current projections, it can pay full benefits until 2037, and collecting Social Security taxes on all income—from earnings and capital—would make the system solvent for many more decades.

But as both income inequality and people’s risk of sudden changes in income increase, and as reliable defined-benefit private pension plans vanish (except for executives like Erskine Bowles), the government needs to increase the payout to retirees, not to privatize Social Security as many Republicans still want.

4. Beware proposals that use deficits to mask attacks on government, the welfare state, public employees, or Keynesian policies.
President Franklin Roosevelt, expanding on his New Deal achievements, called for a Second Bill of Rights—rights to a useful and remunerative job, adequate income, a decent home, medical care, a good education, and protection from economic hardships of old age and sickness. “True individual freedom cannot exist without economic security and independence,” he argued.

But Rep. Ryan (PR), the Wisconsin Tea Partier, sees in such policies a “culture of dependency” on a government with an “unsustainably rapid rate of spending growth” that threatens to “smother the economy” and corrode our “national character.”

The proposed austerity budgets are more Ryan than Roosevelt, seeking to cut government, not secure a “second bill of rights.” For example, some propose shrinking and limiting federal spending to 21 percent (BS) or 23 percent (RD) of GDP, a goal that has nothing to do with reducing deficits and everything to do with arbitrarily limiting government. Currently, the United States taxes and spends less as a share of GDP than all but two other developed countries, Turkey and Mexico. Taxes account for more than 40 percent of GDP in eight developed countries with thriving economies and high standards of living, but combined taxes from all levels of government in the United States account for only 26.2 percent of GDP, according to data from the Organisation for Economic Co-operation and Development.

5. Focus solutions on the real problem: healthcare costs.
According to the Center on Budget and Policy Priorities, the vast majority of the projected deficit through 2020 comes from, in this order, the Bush tax cuts, the economic downturn, the Iraq and Afghan wars, and the Obama stimulus programs. Many of the deficit plans include some military cuts, but none propose a major shift on current wars.

Looked at from another perspective, rising health care costs—both in the general market and in public programs—drive virtually all the rising deficits. But other rich countries spend less with better results and lower projected increases. Some plans (BS, RD) shift many costs to workers, also increasing medical and financial risk to recipients. (RD and PR favor vouchers for buying private insurance to replace Medicare, an option raised by BS.) But moving toward a public, single-payer plan—or at least a public option—could bring health care costs more in line with those in peer countries, control the deficit, and better protect average citizens’ health and financial well-being.

“There isn’t a long-term deficit problem,” Baker says. “There’s a health care problem. If health care gets under control, economic growth goes a long way toward solving the deficit.”

7. Make solutions progressive to reduce growing inequality.
The BS plan relies on budget cuts more than revenue increases to reduce deficits. University of California at Berkeley economist Brad DeLong calculates that, overall, BS gives the top 1 percent of income earners a $7,000 a year tax cut but “an average $600-a-year tax increase for the working and middle classes.” It uses much of the tax expenditure savings not to cut deficits but to reduce tax rates—far outside the Commission mandate. The regressive tax burden adds to the disproportionate harm people of modest means will suffer from program cuts and shifting costs.

The crisis stemmed in part from rising inequality and the policies that fostered it, especially financial deregulation. The rich should pay the bulk of any deficit reduction costs: that is proportional to how they benefited and to their ability to pay. And new budget guidelines to reduce deficits should aim to reduce inequality over coming years, as the JS, CC, and OFS plans would do.

8. Help state and local governments with their budget crises.
Despite deep cuts in essential programs and workforces in at least 46 states, the crises continue, according to the Center for Budget and Policy Priorities. Most states can’t run deficits and have limited borrowing power. Between congressional Republican insistence on cutting state aid and Republican governors’ zeal to cut state government, even to the point of rejecting federal high-speed rail investment, state and local cutbacks will intensify hardships for the vulnerable, and slow recovery of jobs and incomes.

9. Public opinion is not aligned with the deficit-obsessed political, media, and business elite.
Democrats lost badly in the midterms largely because too many working- and middle-class Americans did not see Obama and congressional Democrats delivering any tangible help for them. Some voters shifted to Republicans out of concern with deficits and big government, but a November NBC/Wall Street Journal poll showed little support for the BS deficit plan. In Democracy Corps polling, 67 percent of voters wanted both growth-producing investment and deficit cuts, while 52 percent wanted Congress to fight against corporate interests and for the middle class rather than focus on controlling spending, deficits, and taxes.

10. Tough choices.
They’re not over targets for debt or spending as a share of GDP, nor how deeply to cut the incomes and security of the working and middle classes. The tough choices are over values, such as giving reality to a second bill of rights. It’s over the question plaintively posed by songwriter Florence Reece to the coal miners of Harlan County as they faced the choice of being “a union man or a thug”: Which side are you on?

This article was originally published in the December 15 edition of In These Times. 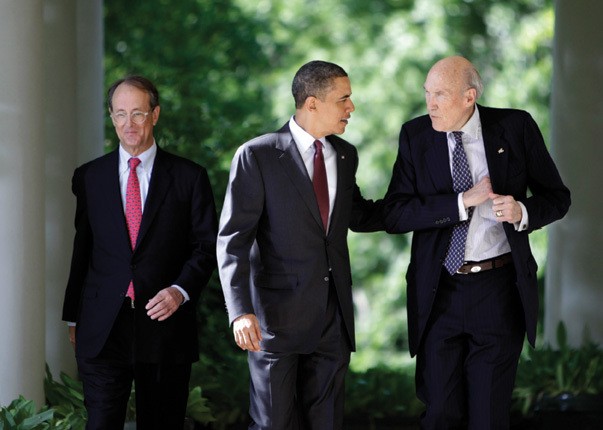 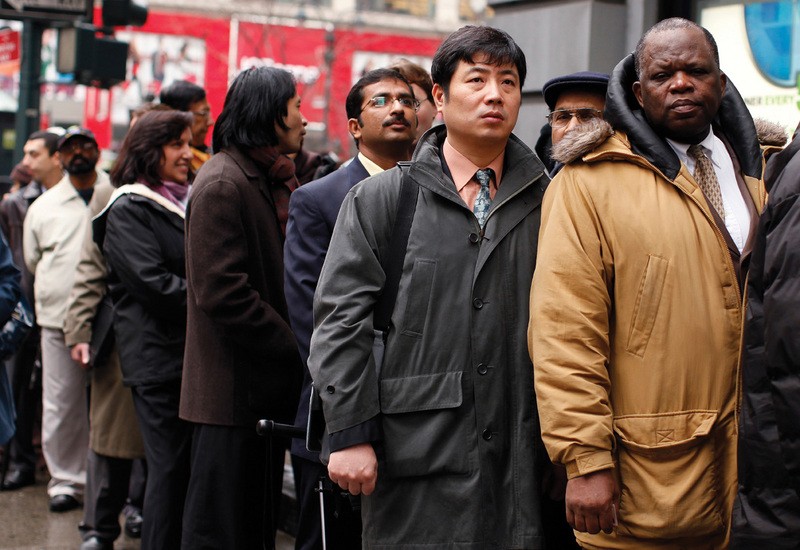