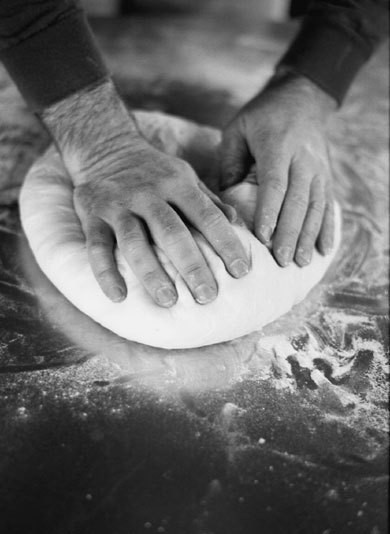 Lest we forget in these no-carb, low-carb, diet-crazed times: Bread is good for you. That is, bread that’s handmade of natural ingredients and baked traditionally in a wood-burning, brick oven. Such bread is made with added ingredients such as dedication and nurturance, and baked for much more than nourishment of the body. The French call this bread-making technique la fabrication artisanale, and artisanal bread is viewed as the work of a master craftsman or artisan. Rustic, wholesome, vital, and satisfying; voluptuously chewy, tasty, and crusty, artisanal bread is as much fuel for the body as it is sustenance for the spirit, but unfortunately, such bread is still a rarity rather than the norm at most bakeries. And even harder to find than a loaf of artisanal bread is a master baker who is willing to open his hearth and share the secrets of baking bread the rustic way.

Thanks in part to the Slow Food Movement’s eco-gastronomes and associations such as the Bread Bakers Guild of America, as well as pioneering “enlightened” master bakers such as the Culinary Institute of America’s assistant dean of baking Tom Gumpel, artisanal bread is enjoying a resurgence right here in the Hudson Valley. Throughout spring, summer, and fall, Gumpel and his wife Marie open the doors of their barn to folks who yearn to learn the art of baking bread the old-fashioned way. Aptly named Hidden Brick Bread, Gumpel’s tidy barn houses a hand-made brick oven, various bread tools, and stainless steel tables. What Gumpel teaches is not simply how to bake the rustic way, but something I call “Zen bread-making”—for the artisanal approach to baking is as meditative, philosophical, and ultimately soulful as it is technical.

Last November I visited Hidden Brick Bread—located on the outskirts of Rhinebeck and set against a backdrop of sweeping fields along a winding, wooded road—on a fresh, cloudless Saturday morning. Classes had finished for the year, but Gumpel planned to continue baking until the winter’s frost permeated the small, unheated barn.

Gumpel says friends always stop by when he bakes, and the day of my visit was no exception. When I arrived, my fiancé and one of Gumpel’s cia students were already inside. Within a few minutes his wife Marie, then heavily pregnant, walked down from the house to greet us, along with two of the couple’s four Boxers. Later on that day, several other guests would happen by.

As I approached the barn, I heard the soothing sound of Miles Davis resonating from inside, and smelled the barn’s chimney smoke of the deciduous woods used to fire the oven that bakes the deliciously earthy loaves of a bygone era. Both doors of the barn were wide open and in a slant of sunlight rested a pillow of dough on one of the stainless steel tables. The dough would soon become naan, a flat bread from India shaped like a snowshoe with a hole in one end, traditionally carried to market on a pole. As the naan dough rose slowly, we stood around the table, chatting about baking while snacking on sweet, yeasty Italian panettone washed down with fresh coffee. Every 15 minutes or so, Gumpel gently hand-kneaded the dough, incorporating flour and coaxing the dough to acquire the proper texture. When a change in consistency signaled the next stage of preparation, Gumpel’s student weighed the dough, separated it into balls, and left it to rise once more.

“The bread tells us when it’s ready—it’s a life that you have to take care of,” Gumpel said. “You’re a witness; you listen, watch, and know how to react.” Gumpel explained that yeast is an organism that changes in response to many factors such as climate, water temperature, and the activity of the dough. Apparently, even when making something as simple and quick as pizza dough, allowing it time to rest—say, overnight—will improve the texture and flavor of it. In other words, being impatient is to blame for the mediocrity of this writer’s homemade pizza dough. Alas, as Gumpel demonstrates, it takes years of practice and observation, along with an acute sensitivity, to create distinctive bread loaves.

Lit at about six o’clock that morning, Gumpel’s brick oven easily warmed the entire, unheated barn. There are two types of brick ovens: direct-fire, which allows a baker to build the fire within and then remove it when up to temperature; and indirect-fire, which contains a side-chamber for the fire that is attached to the main oven by a pipe. Gumpel’s oven is direct-fired and has a front-vented chimney, which is beneficial for air flow because it creates a natural corkscrew-like convection. The oven’s shape—almost like a coffin, as opposed to the dome of a brick pizza oven—also aids airflow. Gumpel was careful to caution us that the entrance of this type of oven becomes dangerously hot, with temperatures up to 1000°f. Gumpel warned about the dangers of having such an oven inside a house, citing the twice accidental burning of Thomas Jefferson’s home.

By Culinary Institute of America