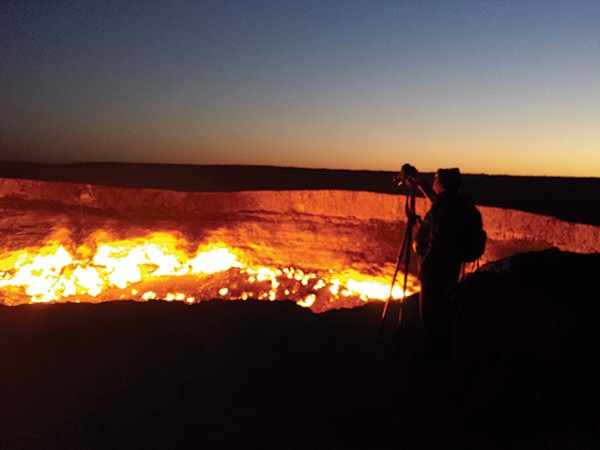 "Photographers talking about light is a cliché," Avery Danziger remarks, then extols the light at The Gate to Hell, a disaster site in Turkmenistan he spent five days photographing last spring. "It's a very warm, very orange light—and it magnifies colors, for sure. I've never seen anything like it." Danziger and his brother Randy journeyed 6,000 miles to the Karakum Desert to observe this fire pit where geysers of flame reach temperatures of 1500°F. The product of their study is "A Photographer's Journey to the Gate to Hell" at the White Gallery in Lakeville, Connecticut.

In 1971 Soviet scientists were drilling for natural gas when their drilling rig fell into the earth. Methane began leaking, and being heavier than air, would suffocate nearby camels and shepherds—like a gas burner left on in a house. Engineers threw a grenade in the crater to burn off the gas. At first, flames spurted up 40 feet; local tribesmen called it the "Gate to Hell." Forty-three years later, the pit is 230 feet in diameter and the gas fires are still burning.

Danziger and his brother only worked at night, because the glow of the crater was invisible by day. They used natural light, including moonlight. Photographing the surrounding landscape, long exposures—20 to 40 seconds—were necessary. (You can see the streaks of stars in some shots.) Shooting into the pit, however, required much faster exposures: often 1/3000 of a second. The goal was to freeze the flames, to delineate them clearly.

A photograph is a painting that paints itself. The trick is waiting for the right moment. "I took about 1,700 photos; maybe 30 of them are any good," Danziger estimates. "That's the nature of the beast."

The gas at the "Gate to Hell" is colorless and odorless. When it burns, it transforms into carbon dioxide and water, making the desert air unexpectedly moist—and tricky to photograph. Danziger had to wait for an unpredictable cool wind to improve his visibility. "Unlike a volcano, there's no noxious vapors," he explains. The only unhealthy aspect of the Gate of Hell is the instability of its edge. From time to time the periphery of the crater crumbles, and a photographer could easily fall to his death. That's why Danziger wore a harness, with his brother manning a rope at the other end. (By chance, Randy is a heating and air-conditioning mechanic.) "It was definitely alluring," Danziger says of the crater. "It had a very siren-like quality to it, as you kept moving closer and closer to the edge."

The Gate of Hell is a minimal human intervention: boring a hole into the earth, finding a pocket of gas, and lighting it on fire. It's like an all-natural version of Times Square—with the same creepy but addictive glow. In the flames one sees monstrous, orgiastic shapes, like the images on video screens at 43rd Street.

But the surroundings are quite barren. "It's otherworldly, because you're in the desert, so you feel like you're on Mars," Danziger recalls. "And you find shells, which is totally bizarre. You find coral." One is constantly reminded that this desert was once the floor of an ocean.

The specter of fracking haunts this show. Though the Turkmenistan "hellhole" was produced by other means, it demonstrates the chaos unleashed in the lust for fossil fuels.

"A Photographer's Journey to the Gate to Hell" by Avery Danziger will be exhibited at the White Gallery in Lakeville, Connecticut, until December 31. (860) 435-1029; Thewhitegalleryart.com.