In Search of Autumn Fun on the Farm? Pennings Farm in Warwick Has It All | Sponsored | Farms & CSA | Hudson Valley | Chronogram Magazine

In Search of Autumn Fun on the Farm? Pennings Farm in Warwick Has It All

The Pennings name has been a part of the fabric of Warwick since the late 1930s, when Jake and Johanna Pennings operated a dairy farm in the then-sleepy town. Jake’s sons Jack and Steve continued in the family farming tradition when they ventured into the U-pick apple movement in Warwick on what is now Pennings Farm.

In the years since, Warwick has blossomed into a popular Hudson Valley destination. With Steve and Jill Pennings at the helm, Pennings Farm has evolved along with it. Now, Pennings Farm’s three locations—the Farm Market, Cidery/Orchard East, and Orchard West—host an abundance of visitors looking for a sweet taste of life on the farm nearly year-round.

For more than 30 years, Pennings Farm Market has been a destination for locally grown produce sourced from its own 100 acre farm, as well as craft food and beverage items from other local vendors. But it’s not just groceries you’ll find at this indoor location, which is open all year long.

The Farm Market also houses its Apple Grader Pub; its restaurant, Harvest Grill; a bakery; ice cream stand; garden center; and its popular beer garden, where guests can compete in Thursday night trivia or hear live music while they sip local craft beers and Pennings’ own cider—which brings us to the second must-visit Pennings Farm location. 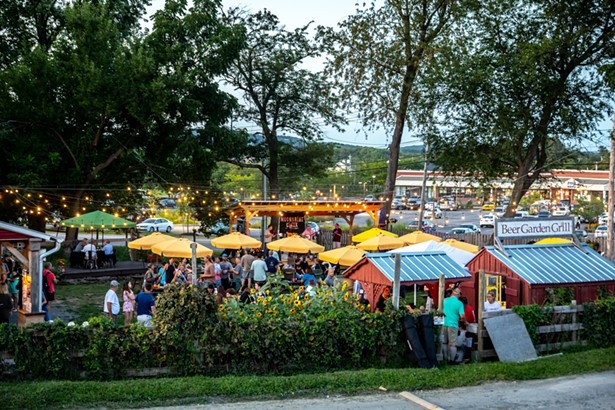 Half a decade ago, hops were planted at Pennings Farm with the goal of opening a brewery. But the cider boom hit the Hudson Valley, so Steve and Jill’s children, Steve Jr. and Tori, switched gears and created Pennings Farm Cidery. Located just up the hill from the Farm Market, the Cidery is a full production facility and taproom in an Amish-built barn that’s open March-December.

The third location within the Pennings Farm orbit is Pennings Orchard West, operated by Jack Sr.’s son Jack and Monica Pennings. It’s located on the northwestern side of the farm with an entrance just a minute down Route 94 from the Farm Market. Open September through early November, Pennings Orchard West offers a great way to spend the day with the kiddos in tow—offering visits with the farm’s resident goats, cows, and pigs; a children’s play area; hay wagon rides; and daily apple picking with no reservations needed. Whether you’re in town to experience the best of the autumn season, looking for a spot to grab a bite to eat or drink, or just to pick up some delicious donuts, local produce, or souvenirs on your journey back home, Pennings Farm truly has it all.