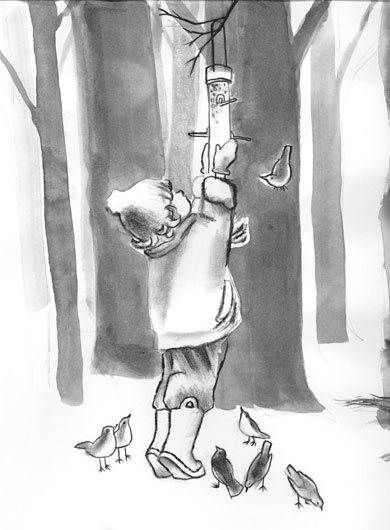 If you’ve ever been in love with someone, you know it is enough just to be with them. They can never ask too much of you. They might say, “Oh, I forgot the teaspoon,” and there you are, bouncing up and looking everywhere for a teaspoon. You never give it a second thought, it is never a burden, and you never think of fetching a teaspoon as an act of love, but it is.

In It’s a Wonderful Life, Jimmy Stewart said he’d lasso the moon for Donna Reed. That’s how love speaks: “How can I serve you? What can I do for you? Just name it, I’ll do it.” It’s what parents do without hesitation for their children. That’s how love works.
What if you were able to act this way not only with your family or your husband or wife or children, but with everybody, all the time? It can happen that way as well. You’ve probably experienced it at some time.

You know how it is when you work alone at a very large, difficult job? Let’s say you’re going to paint your kitchen, tear out those flimsy plywood cabinets, put a nice new floor down. Do it alone and it’s torture. Endless. You’re halfway through, it’s two weeks later, you’re eating sheetrock dust for dinner every night and beginning to question your sanity. “What was I thinking?”

Then, someone knocks on the door and says, “Hi, I just came to help.” What happens to the work? It’s not half as hard, it’s many times less hard. And then another person comes by. Maybe they’ve got a bad back and can’t do the heavy stuff but they bring a meal around or offer to take the kids for a while or walk the dog. The work gets even easier—not just a third easier, a lot easier. More gets accomplished with less effort. You find the jobs you were dreading aren’t as daunting as they seemed, you’ve got new energy, the job is hardly a job anymore.

That’s a good analogy for what happens when a few people understand service and can serve. What happens isn’t something arithmetic—it’s exponential. What’s formed is a sort of generator that’s able to compound whatever energy is there.

There’s a parallel between the love we see when two people adore one another and the generating of this energy I’ve just described. You can quite literally call it “making love,” the only difference being that it’s available for everyone who comes in contact with it.

It’s like a team of bakers who find out that there are people starving in the streets. So they bake and bake all night, and then they go out and give the people bread. But what’s in it for them? When they first came in as bakers they’d watch the clock, wonder when they could get out of the hot, dusty bakery and back to their homes. They were elsewhere, so they couldn’t be present enough to see there was a need outside themselves that required attention and action.

If that sounds too much like a fairy tale or parable, let me give you a personal example. When I was a kid I worked summers, and I was an expert clock-watcher. I used to hide from the boss. Working was all about getting away with things—doing the least amount of work possible and just waiting for time to crawl by so my friends and I could be back out on the streets of Brooklyn.

One summer I got a job at the local A&P. The manager there for some reason took a liking to me and persecuted me. It was hell with this guy. His name was Hugo Tortorella and he was a terror. He was all over the store like he owned it. He was short, like Napoleon, and always wore a suit or sports jacket, white shirt, and a bow tie. You’d think this would make him obvious, standing there in the produce section or back in the meat department, looking like a college professor among all these blood-stained white smocks. But you never knew where he was lurking, or where he would next appear.

Hugo had my number from the get-go. One Saturday, I arrived 17 minutes late for work. For the next nine hours, he drove me like a cowboy drives a herd of cattle. Mine was the only name on the PA system: “Crocitto! Up front!”

“Crocitto! To the butcher!”

It was the purest torture.

Hugo saw me shelving cans and came storming down the aisle like he was on fire. I wasn’t fast enough. He’d come right up in my face and say things to me to torment me, so I had to speed it up.
“Crocitto! Help bag!”

There were always long lines at the checkout counters. Hugo put me with a cashier who was super at banging out the cash register, and no matter how fast I stuffed those bags, no matter what I did, there’d be a full load of stuff pouring down the little black conveyor belt at me.

But then, as I worked, something let go inside me and I stopped caring about the weariness of my muscles, about what I could be doing instead of bagging groceries, about time and how it was being eaten up minute by minute. I even stopped worrying about what Hugo thought of me. I found myself just working.

It was something new. I got to like the feeling, to crave it.
Other guys at the A&P picked up on it, too, and started to work like that. Sometimes, when we were all bagging away or stocking the shelves, that A&P started to click. Those lines would get cut down no matter how busy it got. Everything was easy. I didn’t know anything about Zen Buddhism back then, but I can look back and remember how it seemed like the cans were going out of the boxes and onto the shelves by themselves, they were going so fast. And when you were bagging, how there were always places in the bag where the right size thing would fit perfectly—tomato cans, milk bottles, celery, cabbage heads, apples, wedges of cheese, aluminum foil, Wheaties . . .

That’s when it’s all happening.

People can consciously generate this kind of energy. That’s what a group is—not a bunch of people getting what they can, but a group of people who have understood something and now give as much as they can without any thought to themselves, to the clock, even to the boss.

Working together like that creates an energy that’s more than the sum of its parts. It compounds everything, and then there’s always plenty extra.

Anybody with eyes to see knows there’s a world of need out there, and that need can be filled only by people who have put away their fascination with themselves and turned their attention outward. Once they do, it becomes possible to generate the type of energy I’m talking about. It’s a process by which people can feed a starving world, exactly like those bakers. And anyone who wants to generate this energy—this bread, if you will—needs to let go of his or her usual concerns and put the focus totally on others, so that when someone asks you to lasso the moon for them, you can say, “Sure!”